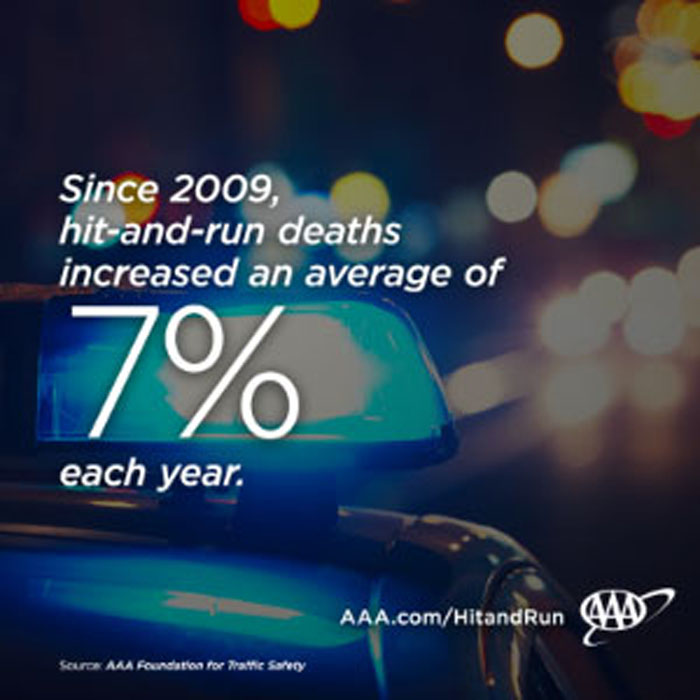 CHARLOTTE — More than one hit-and-run crash occurs every minute on U.S. roads, according to new research from the AAA Foundation for Traffic Safety. These crashes resulted in 2,049 deaths in 2016 — the highest number on record and a 60 percent increase since 2009.

Last year in North Carolina, there were 56 recorded hit-and-runs, according to the NCDOT. South Carolina data was not available at press time.

With the number of hit-and-run crashes on the rise, AAA is calling for drivers to be alert on the road in order to avoid a deadly crash and always remain on the scene if a crash occurs.

• Be aware: Pedestrians may act unpredictably and can walk into the path of travel at any point.
• Be cautious: Look out for small children and be alert to areas where there are likely to be more pedestrians. These include school zones, playgrounds, bus stops and intersections.
• Be patient: When trying to pass a pedestrian or cyclist, give plenty of space and keep them in your line of sight.
• Be vigilant: Drivers should always yield to pedestrians, even if they walk into the road from an area other than a crosswalk.

Currently, every state has laws that make it illegal for a driver involved in a crash to flee the scene.

If a driver is involved in a crash, they should follow the steps below:
1. Assist the injured — Check for injured people and call 911.
2. Be visible — Make sure that the scene is visible to approaching drivers. If possible, move vehicles out of the path of traffic, and use hazard flashers, flares, and reflective triangles. Find a safe place to remain until emergency services arrive, if needed.
3. Communicate — Call the police and file a report. If the police do not come to the scene, you can file a report by visiting a local police department or your automobile insurance agency.

Rowan weather: Days of showers and storms ahead