Don’t let a new ingredient freak you out 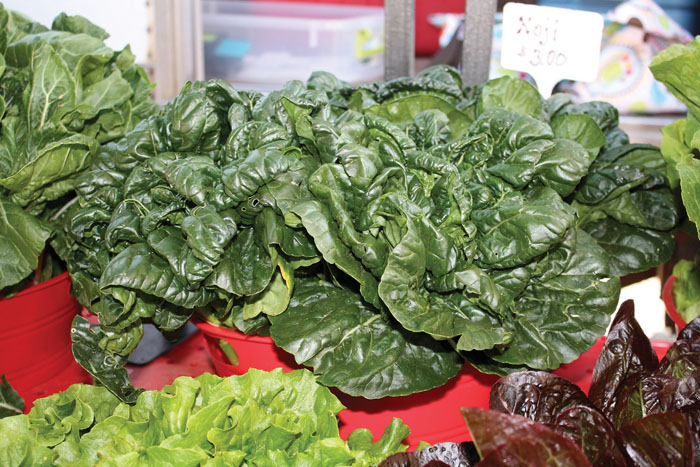 More fresh vegetables are popping up at the Farmers’ Market. Some are familiar, but some, not so much.

Two vendors still had strawberries this week, but the extreme hot weather, followed by days of showers and storms, could change that.

David Correll had two things that start with K that many people are not familiar with.

Kohlrabi looks like an alien spaceship — a large green bulb with seemingly random stalks all around.

It’s not going to start hovering over you saying, “Take me to your leader,” and no tiny aliens will emerge when you break off a stalk.

Kohlrabi is in the cabbage family, and it tastes like a bunch of other vegetables — radish, jicama, broccoli. The smaller the bulb, the sweeter, and that has a flavor like a mild apple.

You can eat it raw — and it adds nice crunch to cole slaw or other salads, or you can cook it, bulb and leaves. You can roast it, which seems to be the most popular way of cooking veggies these days, and Martha Stewart says you can make kohlrabi chips.

Germans have been eating kohlrabi for hundreds of years, and it has become a popular vegetable in India.

Eating kohlrabi can improve your digestion due to its fiber content. It’s also low in calories and has potassium and vitamin A.

Before preparing, peel the outer later, which is very fibrous, with a knife. Adding it raw to slaws and salads might be best for a hot summer, but you can also use it like any root vegetable, adding it to soups or stews.

If you see Koji and wonder what to do with it, don’t freak out when you Google it and find out it is a fungus. That’s not the green you’ll find at the Farmers’ Market. Koji fungus is very popular in Chinese and Asian cuisines. Koji greens are sort of like cabbage. The flavor can range from pungent to sweet, and the leaf is a gorgeous, shiny dark green.

You can use it in a hearty salad, stir-fry it or serve in soup, particularly one with other traditional Asian flavors, like garlic or chile.

And we’re still having adventures with rhubarb. We found an easy cake recipe, and we adorned it with some sliced strawberries and whipped topping. It’s good plain, too, and not too sweet.

Slice the apples, then cut into matchsticks. You do not have to peel. Put the apples in a large bowl and toss with the lemon juice.

Use a sharp knife to peel the kohlrabi, then cut it into quarters, then slice each quarter and cut into matchsticks.

Whisk the vinaigrette ingredients into a small bowl.

Toss the dressing with the apples and kohlrabi.

You can grate a hard cheese, such as parmesan or gruyere, over the top just before serving.

Preheat oven to 350 degrees. Remove stems and leaves of kohlrabi and reserve for another use. Peel the thick outer skin and slice bulb in half, if large. Slice each bulb into one-quarter inch slices. Drizzle a sheet pan with olive oil and place kohlrabi in pan. Season on both sides with salt and pepper and drizzle more oil over the top. You don’t need a lot of oil, just enough to coat both sides.

Cook for 8-10 minutes, then flip the slices and cook 4-6 minutes more. The outside should be golden brown, and when pierced with a fork, the inside should be tender. Serve with a sprinkling of grated parmesan.

4 garlic cloves, peeled and bruised with a flat side of a knife, then chopped

1-2 fresh red chiles, such as Fresno or cayenne, sliced on the diagonal into thin pieces.

Wash the greens well in cold water, cut off the bottom ends and discard.

Cut the cleaned greens into 2 or 3-inch pieces, then spin dry in salad spinner or pat well with paper towels.

In a wok, 12-inch skillet or Dutch oven, heat the oil over medium high heat until shimmering. Add the chopped garlic, salt and chiles and sauté about 1 minute.

Add the greens and stir them around the pan quickly, until they begin to soften but are still green, 3-4 minutes.

Remove from heat and serve. Check for salt and add a dash of pepper if you like.

Can also top with a sprinkling of oyster sauce. 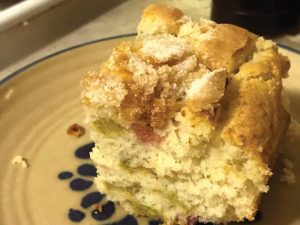 2 cups all purpose flour, saving 1 Tbsp. to toss with rhubarb

Preheat oven to 350 degrees. Lightly butter a 9-by-9 square baking pan. You can line the pan with parchment paper with overhanging ends to make it easier to lift the cooled cake out for cutting.

Stir the lemon juice into the half and half and set aside.

Cream the soft butter and sugar in a stand mixer or with electric beaters until fluffy and pale yellow. Beat in the egg and vanilla, scraping down the bowl as necessary.

Use 1 Tbsp. flour to toss with the rhubarb.

Spread batter into a prepared pan and sprinkle the top evenly with a little sugar. Bake 40-45 minutes, or until the cake is turning golden and a toothpick comes out without wet batter clinging to it.

This recipe is good with berries, as well.

To reduce the fat, use 1/2 cup buttermilk instead of the half and half and lemon.

— the view from great island

Duke days: She once received leukemia treatments from university…