After checking off items on his bucket list, Bentley the dog’s battle comes to an end 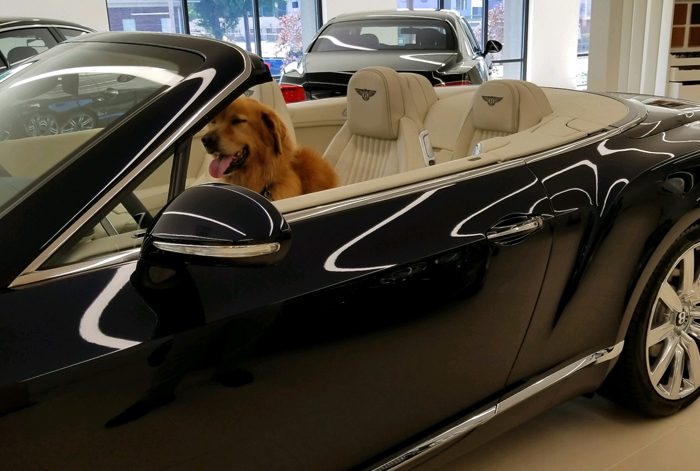 Bentley's bucket list included riding in a Bentley automobile, which he did courtesy of a High Point dealership. Submitted photo

CHINA GROVE — After what Jacqueline Brown said was a difficult weekend for her golden retriever-chow mix, Bentley was put to sleep Tuesday afternoon.

Brown and Bentley were featured in a Salisbury Post story, “A bucket list for Bentley,” last Thursday.

Bentley had a tumor on his left shoulder. It was removed about a year ago but returned within six weeks.

Brown said that over the weekend, Bentley was not putting weight on one of his back legs and was refusing to eat.

“When they stop eating, that’s usually your sign,” Brown said.

Brown said she was “devastated” to lose Bentley.

“But yet I know it’s the last gracious gift I can give him for all the love he’s shown me,” Brown said. “It’s bittersweet.”

Brown works at South Rowan Animal Hospital in China Grove. She said Bentley was put to sleep at the hospital just after business hours Tuesday.

“People think that because I work here, it’s easier for me. But it’s not,” Brown said. “There’s no experience that can help you put down one of your family members.”

Bentley’s remains were transported by a Jeep convoy to Lyerly Pet Cremations in Salisbury.

Brown said about 20 Jeeps took part, some of them driven by people who had met Bentley. It was a “good send-off,” she said.

The last item on Bentley’s bucket list was to ride in a Bentley car.