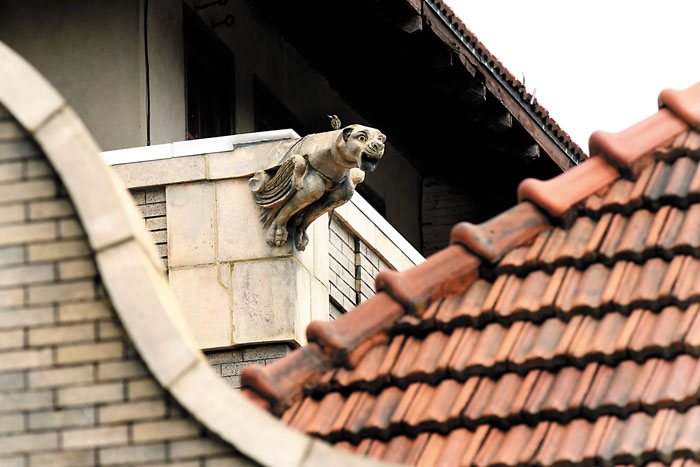 The depot was built in 1908 of brick and ceramic tile from the design by Frank P. Milburn. He was a well-known architect who designed many Southern Railway depots during that period. Train travel was intense around 1910 with more than 40 trains coming through Salisbury each day on the main line between Washington, D.C. and Atlanta.

The local station was built to be spacious and attractive. The design called for red brick and a mixture of tan brick with a Spanish tile roof and a tower centrally located reaching 3 1/2 stories above the ground. It is on this tower that the four gargoyles have had a home since the construction. They appear to reach way out from the tower in a threading manner to those beneath.

The National Resister of Historic Places inventory described them as “A single grotesque gargoyle juts out from each corner of the parapet, adding a charmingly eccentric note to the tower’s severe silhouette.”

Gargoyles features have been used since times in early Egypt. They have a history of being used in Medieval cathedrals for part religious reason and part superstition. The carved stone figures have many forms like dragons, devils, half-human and animals. Some are stone-carved human heads.

The station’s gargoyles look like a dog or maybe a tiger wearing a collar ready to attack. Two feet with claws push against the building. It appears that each creature also has wings folded under its body. Others may have a different interpretation of what you see. They are fierce-looking creatures.

These mythical creatures were to scare away Satan and evil making the cathedrals safe places. It is believed that early Christians came to the church for protection and for a safe house, using a modern term. There is a legend that a dragon-like creature with wings was killed and burned. The creature’s head would not burn so the head was placed on the church roof to scare away evil.

Actually, the gargoyles had a more important function than frightening evil away. The features were an early pre-rain gutter device to gather the water from the roof of the building and throw the water away from the brick and mortar of the building. Rain water tends to damage the brick and mortar over the years, so, if the water was funneled through the creature and out the mouth of the gargoyle that was extended 4 or 5 feet away from the building, it protected the structure.

So are the gargoyles art features are just rain spouts? I don’t know about the legend of scaring away Satan and evil and attracting Christians, but I do believe that if you wander under one of these ugly creatures during a rain storm, 3 1/2 stories high on the top of a building, and he is spitting water down,  you will think that the evil one has drenched you with gallons of water.