County organizations come together to “Stamp Out Hunger” 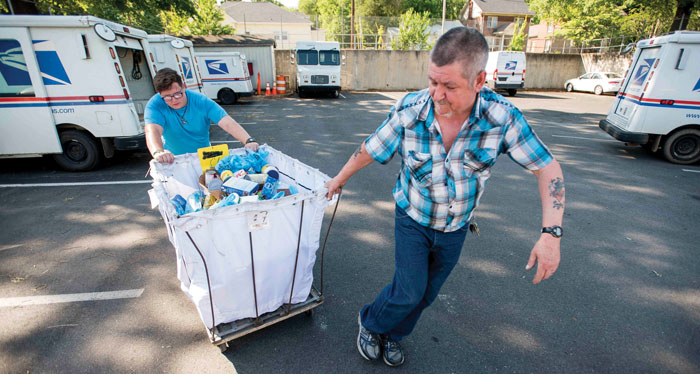 Kevin Joplin and Tommy Cline unload a mail truck that was filled with food. US Postal carriers collected seemingly countless bags of food products from their mail customers as volunteers from Main Street Mission, Rowan Helping Ministries and Salvation Army sorted and distributed the collections for the local food pantries. Saturday, May 12, 2018, in Salisbury, N.C. JON C. LAKEY / SALISBURY POST

As temperatures crept toward 92 degrees on Saturday afternoon, a crowd worked in a flurry of movement on the loading dock of Salisbury’s U.S. Postal Service building.

The group was sorting a seemingly endless influx of dry and canned food with sweat and smiles abounding. This sort was the near last step of the National Association of Letter Carrier’s 26th annual “Stamp Out Hunger” food drive.

Over 24,000 pounds of donations were received.

The drive takes place each year the second Saturday in May. Letter carriers provide bags and reminder cards for nonperishable donations, which are left in or near mailboxes and collected as mail is delivered that day.

United Way has assisted the association in the effort for the last 12 years, said United Way marketing director Jackie Harris. They reach out to the agencies receiving the donations and organize volunteers.

“Because we all work as a team, it makes it worth while and not so much on any one group,” she Harris. “We split the duties up, so it makes it nice.”

Only one of these agencies — the Salvation Army — is a United Way partner agency.

“United Way is a about the community,” said Harris. “This is a community effort. It’s not about member agencies, it’s about agencies in the community … distributing food to families on a daily basis.”

To keep things fair for the recipients, volunteers worked to sort donations by item into item-specific banana boxes: there was a place for dry beans, rice, canned carrots, canned corn and so forth.

Once three boxes were filled, representatives from the food bank agencies would collect the boxes and weigh them at their own stations, said Harris.

Tom Brooke, chairman of the Board of Directors for Main Street Mission, was among the group doing the sorting.

“It’s a lot of work, especially when it’s a little bit warm like it is today,” he said. “But, it’s fun seeing all this food coming in and it’s great seeing the postal service helping and doing stuff.”

He said that the donations received make a great impact on the people Main Street Mission served.

“I don’t know if I could point to a specific can that came in a box here that went to somebody and changed their life, but I can see lots of good from the overall program,” he said. “We always need food and the postal workers are great for getting it for us.”

Tommy Cline, a volunteer with the Salvation Army, has assisted with the drive each of the past twelve years.

He said for him, the food drive shows community hospitality and helpfulness. It’s the community “just being there for somebody that needs the food,” he said.

“We don’t know what’s going on in these people’s lives,” Cline said.

“Our lives can all be turned around in a matter of minutes,” he said. “We could all be in a bad situation. I’m hoping that if it were turned around, someone would be there to help me.”

Robertson encouraged others to help when they could, “because you don’t know when you’re going to need help,” he said.

Harris said that the distribution continued until after 8 p.m., with sorted boxes eventually being traded for assorted and filled bags.

She said more donations are sure to trickle in, and she has hopes the drive will beat last year’s total of 31,000 pounds of donated food.

“If everyone does a little it really adds up,” she said. “This is all hard work, but it’s fun because you know the end result is. The most important part of anything you do is the impact that it has. This really has an impact.”