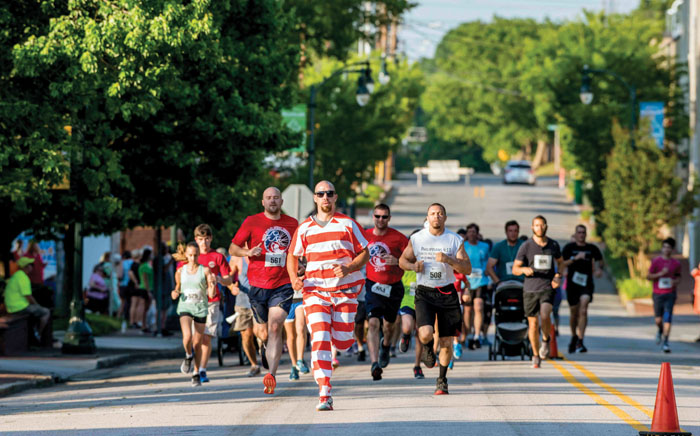 Downtown Salisbury was livened up on Saturday evening with something that looked best suited for the silver screen.

It was a lone convict in white and orange stripes. Behind him, a mob of townspeople in hot pursuit.

In actuality, the convict wasn’t much more than a man volunteered for the role, and the townspeople were participants in the Salisbury Police Department’s first annual Foot Pursuit 5K Run/Walk.

They wanted to do something “not necessarily police related,” said Smith, though they did want to use the event as a kickoff for National Police Memorial Week, which starts today.

In total, nearly 70 participated in the 5K, with proceeds benefiting the Special Olympics.

For Smith, he said the decision to choose Special Olympics as a recipient of funds raised was easy. The department already raised money for Special Olympics North Carolina through the Torch Run.

“He’s what has gotten me into it and kept me into it,” Smith said after Benji blew a horn to signal the beginning of the race.

Participants of the Saturday evening race were of all ages, with many expressing an affinity for the work of the fundraiser’s beneficiary.

John Hurtubise and RaeAnn Kalenka ran with their seven-month-old daughter Rory. Before the birth of their daughter, Kalenka was an EC teacher at Corvian Elementary School.

She said she had a goal of running a 5K before her daughter turned six months old, and that the Salisbury-Rowan Runners had presented her the opportunity to do just that.

“The first race I did was to support materials for EC classrooms,” she said. “That’s why I was like, ‘this is the one for me.’”

Hurtubise said he was inspired to start running after his wife ran two races without him.

The pair each placed first in their age group.

Allison Tuck ran the race with her son Parker, who has autism and a rare form of seizures that are resistant to drug medications.

Tuck and her son ran with the assistance of an Ainsley’s Angels of America ‘chariot,’ a large stroller that helps those with special needs compete in endurance races.

Tuck is an ambassador for the organization, and this was the pair’s first debut in the Triad after she worked to bring the program here.

“We take special needs children and adults … who cannot complete an endurance race on their own,” she said. “We put them in one of our nice chariots here … We call it rolling with the wind because when the wind hits their face the smiles light up.”