Morton has 14 Ks for Astros; Freeman leads Braves to win 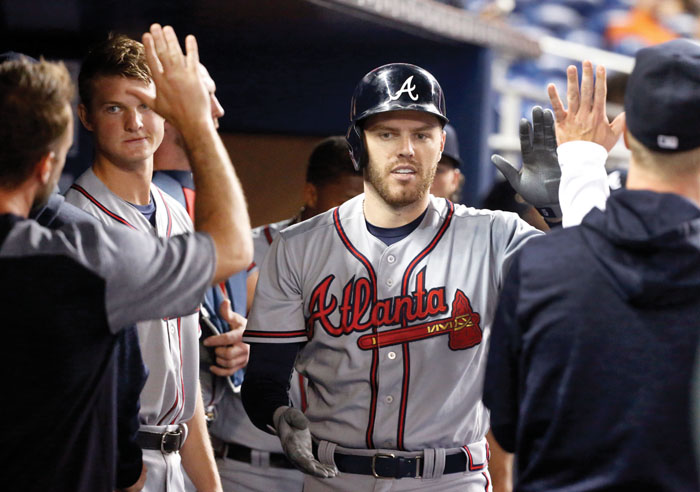 Atlanta Braves' Freddie Freeman, center, is congratulated by teammates after he hit a home run during the first inning of a baseball game against the Miami Marlins, Saturday, May 12, 2018, in Miami. (AP Photo/Wilfredo Lee)

HOUSTON (AP) — Charlie Morton struck out a career-high 14 in seven innings and Evan Gattis, Brian McCann and Carlos Correa homered, leading the Houston Astros to a 6-1 win over the Texas Rangers on Saturday night.

Morton (5-0) yielded four hits and a run while lowering his ERA to 2.03. He also extended his career-long winning streak to eight games dating to last season.

McCann made it 2-1 Astros with a solo drive in the fourth. Gattis added another solo shot in the fifth, and Correa’s two-run homer extended Houston’s lead to 5-1 in the eighth.

NEW YORK (AP) — Left fielder Brett Gardner threw out Matt Olson at the plate with the help of a replay reversal, and the Yankees beat the Athletics on Neil Walker’s run-scoring single in the 11th inning.

Yankees closer Aroldis Chapman walked three straight batters around a wild pitch starting the ninth. After visits to the mound by both pitching coach Larry Rothschild and a trainer to check on a cracked fingernail, Chapman struck out Mark Canha, and pinch-hitter Jonathan Lucroy followed with a fly ball to left.

Gardner’s one-hop throw to the plate was slightly to the first-base side, and Gary Sanchez had to try for a sweep tag at the sliding Olson. Plate umpire James Hoye made an emphatic safe call, but the Yankees asked for a video review and replays appeared to show Sanchez’s mitt just glancing Olson’s jersey.

New York stopped a two-game losing streak that followed its 17-1 run. A.J. Cole (2-1) pitched two innings for his first win with the Yankees.

PHOENIX (AP) — Stephen Strasburg struck out nine in 6 2/3 innings, and the Nationals earned their third straight victory against the NL West leaders.

Strasburg (5-3) allowed one run and five hits in Washington’s sixth win in seven games. The Nationals stranded 11 baserunners, but Bryce Harper and Anthony Rendon each drove in a run.

Sammy Solis and Shawn Kelley each got two outs before Ryan Madson finished the five-hitter for his third save.

Arizona dropped its season-high fourth consecutive game. The Diamondbacks also lost a series for the first time after opening with 10 wins and two ties.

MIAMI (AP) — Freddie Freeman connected twice for Atlanta, and Jose Bautista atoned for a costly error with his first homer of the season.

The Braves broke a 5-all tie in the eighth inning, when Marlins relievers issued three consecutive walks — each on a 3-2 pitch, and the last two with the bases loaded.

Bautista, who joined the Braves on May 4, made his first error when he bobbled Brian Anderson’s two-out grounder to third in the fifth. One run scored on the play, and Derek Dietrich followed with a three-run double to put Miami ahead 5-4.

All four runs in the inning were unearned, but Bautista tied the game leading off the next inning with the 332nd homer of his career.

A.J. Minter (1-0) retired one batter in the seventh for his first career win. Drew Steckenrider (1-1) got the loss.

CHICAGO (AP) — Willson Contreras hit his third homer in two games and drove in three runs, leading the Cubs to the win at a rainy and cold Wrigley Field.

Contreras finished with three hits as the Cubs won their fifth in a row.

Cubs slugger Anthony Rizzo hit a three-run homer in a four-run first against James Shields (1-4) after the start was delayed 2 hours, 15 minutes. Jon Lester (2-2) allowed one run in 5 2/3 innings.

Brandon Morrow came in with runners on second and third in the ninth after right fielder Kris Bryant dropped Trayce Thompson’s fly and got three outs for his ninth save.

Matt Davidson hit a three-run homer in the eighth for the White Sox, who lost their seventh straight to fall to 9-27 — the worst 36-game start in franchise history.

Hanley Ramirez hit a two-run homer for the Red Sox, who have won 14 of their past 17 north of the border. Andrew Benintendi and Mookie Betts each had three hits.

Price (3-4) skipped Wednesday’s start against the Yankees after experiencing numbness during a bullpen session last Sunday. Making his first start in nine days, he permitted two runs and five hits in his first victory since April 17.

Justin Smoak hit a solo home run for the Blue Jays, who have lost seven of 10 at home. Marco Estrada (2-3) allowed four runs and seven hits in six innings.

Craig Kimbrel got three outs for his 11th save in 13 chances.

Cleveland’s Michael Brantley had three hits, drove in two runs and broke a 2-all tie with an RBI double in the sixth.

Mike Clevinger (3-0) allowed two runs in 7 2/3 innings as the Indians won for just the second time in their last seven games.

Story put together his first multihomer game of the season, hitting both off Brent Suter (2-3), who pitched a day ahead of his scheduled start after Chase Anderson was scratched because of a stomach illness.

Recalled from Triple-A Norfolk to serve as the 26th man in the single-admission doubleheader, Hess (1-0) gave up three runs and six hits. Mychal Givens worked 1 2/3 innings for his first career save.

In the second game, the Rays scored a run in each of the first four innings against Cobb (0-5) and led 4-1 in the sixth when a thunderstorm stopped play for 1 hour, 19 minutes.

Baltimore ultimately cut the gap on an RBI single by Trey Mancini, who also homered in the first inning. But Tampa Bay pulled away, ending the Orioles’ season-high winning streak at four games.

Mallex Smith had three hits and three RBIs for the Rays. Sergio Romo (1-0), the second of seven Tampa Bay pitchers, got the win.

DETROIT (AP) — Robinson Cano hit a three-run homer in the fifth inning, and the Mariners slugged their way to a split of their doubleheader with the Tigers.

Detroit won the opener 4-3, thanks in part to a terrific catch by center fielder JaCoby Jones in the ninth inning. The nightcap didn’t go nearly as well for the Tigers. Nicholas Castellanos left in the second inning because of an injured finger on his left hand, and manager Ron Gardenhire was ejected in the fifth.

Cano and Ryon Healy homered for the Mariners in the second game, and John Hicks went deep for the Tigers. Detroit’s Jose Iglesias hit a two-run shot in the first game.

Matthew Boyd (2-3) allowed three runs and three hits in six-plus innings for the Tigers in the opener. Detroit broke a 1-all tie in the sixth against Seattle starter Marco Gonzales (3-3). With two out and nobody on, Jones hit a hard grounder that bounced off the left leg of third baseman Kyle Seager and into foul territory for a double. Grayson Greiner followed with a single to right, and Jones scored on a very close play at the plate.

In the second game, Healy’s two-run homer off Michael Fulmer (1-3) put Seattle up 3-2 in the fourth, and Cano made it 6-2 in the fifth with his fourth home run of the season.

Felix Hernandez (5-3) got the win but labored through five innings, allowing five runs and eight hits.