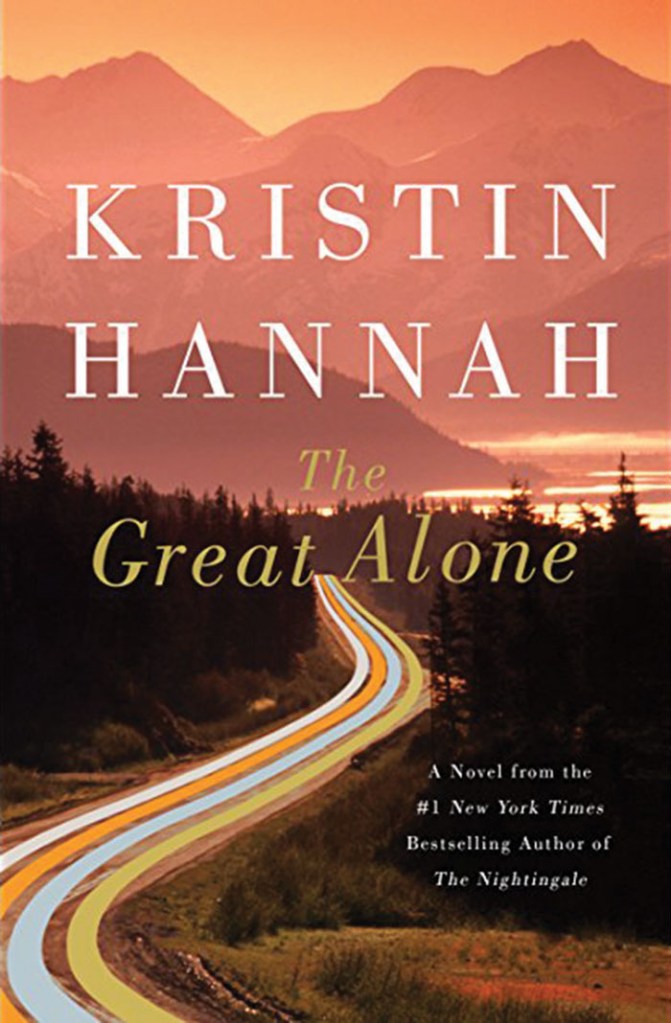 At times, “The Great Alone” is a soaring, captivating novel about life in Alaska.

It’s full of harsh weather, hungry predators, harsh landscapes that could kill the unwary at any moment. It’s also the site of crystal blue waters, green and purple Northern lights, the brilliant blue and white of a glacier; the sounds of nature without the sounds of man.

At other times, this book is a series of impending doom moments, bloody violence and romance novel heroism.

Leni Allbright and her parents, Ernt and Cora, are fleeing Ernt’s latest failure in Seattle, heading north in a VW bus to land promised to Ernt by his buddy, who died in Vietnam.

Ernt has serious problems. A Vietnam vet who was a prisoner of war, he has flashbacks, nightmares, a drinking problem and a tendency to violence. Why he thinks the months of darkness, the need to kill or raise all your food and the isolation of a brutal Alaska winter will save him, we never learn. He has idealized this journey.

Cora is a chain-smoking hippie who loves Ernt beyond all reason. Their love cut her off from her family. Their daughter, Lenora, loves but is scared of her father. She’s very close to her mother, and feels she must protect her.

Once in Alaska, their homestead is a cabin with no electricity or running water; no garden, no animals, no beds or furniture. It’s full of dead bugs, animal feces and cobwebs.

As is the way in Kenaq, neighbors come to help, among them Large Marge, who deserves her own book, to tell them what they’ll need to survive and help them build, gather, secure and scavenge what they can. Actually, several of the peripheral characters would make a good story — they are more animated, and not a cutout of violent vet, helpless wife.

Ernt seeks out his buddy’s family and Mad Earl welcomes him with open arms — a substitute for the boy he lost. Earl is a survivalist. He’s laid in supplies, armed up his kith and kin and is ready for the coming apocalypse.

This is right up Ernt’s alley. He hates the government and all authority, hates people who have, when he has not. He imagines nuclear attacks, government takeovers. He is insanely jealous, and Cora is a natural flirt. She pays for it with bruises and nosebleeds. He apologizes with sex.

Leni has to learn the ways of the wild fast, although her father is tough and unyielding in his teaching.

The saving grace for Leni is school. One boy, Matthew Walker, is her age, and in him she finds a fast friend and later, her first love. She confides in no one, hiding her father’s abusive nature, and agreeing to his every whim, just to placate him.

She’s not heartless, She’s incredibly brave and grimly mired in the cycle of domestic abuse. Leni lives in her books, and lives to face Alaska. She loves it with all her being. But she’s also a bit of a cliche — like a comic book heroine.

This book is one disaster after another, violence after violence, a sense of hopelessness and a deep sense of loss. Every action is so big, as is every reaction, that it can be exhausting. If something could go wrong, it does.

Ernt is to blame for most of the violent acts. Nature is thoughtless in her violence, and more than one character is her victim. There’s no escaping either one.

Leni is the star of the book, but she is so battered by the cruelty of her life, it gets to the point where the reader will think, “Isn’t this enough?”

Even when relief comes, it’s fraught with lies and fear. Is there any hope left?

What Hannah, who was raised in Alaska and draws from some of her experiences, does to wrap up the story can leave the reader incredulous. The author is trying to make up for what she’s done to her characters, especially the brave and beleaguered Leni, but she emerges as a romance novel heroine — “the course of true never did run smooth” and all that.

Hannah treats the reader to beautiful scenery, but the story of women in peril is    done too much, and the way the women overcome this peril is not the answer.

“The Great Alone” would be a nice beach read, if you need to be distracted. But there’s nothing here that hasn’t been done before.