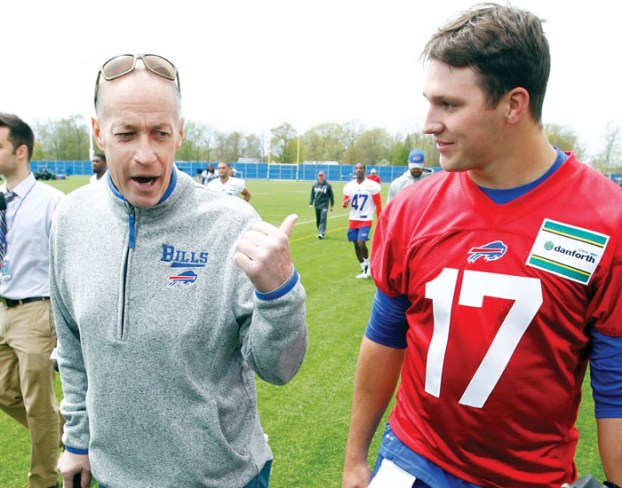 ORCHARD PARK, N.Y. (AP) — The only time Bills rookie quarterback Josh Allen ever felt rattled on his first day of practice was shortly after the session ended Friday.

That’s when coach Sean McDermott escorted the first-round pick to the sideline and introduced him to Jim Kelly in what became a meeting of the team’s hopeful future and legendary past.

Though Allen grew up in central California and played college at Wyoming, the 21-year-old is very aware of who Kelly is and what he means to Buffalo.

“It’s all on the wall,” Allen said, pointing the four AFC Championship banners the Kelly-led teams won from 1990-’93.

Allen also knows how tough Kelly is in his ongoing battle with cancer.

“I can’t say anything else but he’s a special man. He’s been through a lot,” he said. “And to be in the spirits that he is and to come out here and show support for the Buffalo Bills, that just shows to me how much he means to Buffalo and Buffalo means to him. It’s awesome.”

Kelly made a surprise visit for the start of two-day rookie minicamp some six weeks after his latest operation to have cancer removed from his jaw.

Kelly walked with a cane and had difficulty speaking. He raised his right thumb while he and Allen posed for pictures. Said Kelly: “It’s the best thing I can do: Thumbs up.”

The Bills are pinning their hopes on Allen to fill what’s been their most unsettled position since Kelly retired following the 1996 season.

Buffalo traded up five spots in the draft order to select him with the No. 7 pick two weeks ago. Allen became just the fourth quarterback selected by Buffalo in the first round, and first chosen in the top 10 of the draft order.

He joins a team once again shuffling starters after Tyrod Taylor was traded to Cleveland in March despite helping Buffalo to a 9-7 finish and end a 17-year playoff drought.

Allen was knocked for his relatively low completion percentage of 56.2 and mechanics, something he spent working on this offseason.

“We’ve got a plan in place for all of our players, and in this case Josh, in terms of bringing them along at the right pace,” McDermott said.

Allen threw a few wobbly or high passes to his right. He was far more accurate with passes to his left and over the middle. Allen showed off his strong arm, by completing several deep passes, including one to rookie seventh-round pick Austin Proehl.

He was also intercepted once during one-on-one drills. His hard, high pass over the middle slipped through receiver William Scott’s hands and to a defensive back.

“I felt like I’ve made a lot of strides,” Allen said. “I felt like I put the ball where it needed to be most of the time. Obviously, there’s some throws that I would like back. But as we progress through this rookie minicamp and through the rookie developmental period, I plan to improve every day.”

He was pleased in learning how Kelly was overheard praising a few of his throws.

Allen said Kelly first contacted him by text in welcoming him to Buffalo the day after being drafted.

“Hopefully, in the near future we can keep that relationship going,” Allen said. “Any rookie that can develop a mentorship with a former quarterback like Jim Kelly, it’s going to be huge.”