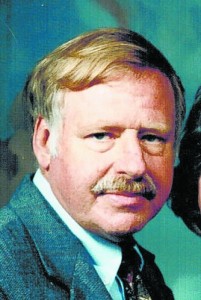 What’s the nicest thing you can give a working wife with children on Mother’s Day? Answer — a week off, a week away from alarm clocks, cooking, cleaning, laundry, lunches and endless to-do lists. I have given my wife this gift for 40 years. What she did with it was surprising.

Her sister hatched the idea. “We’ll call it the ‘Mothers Mountain March.’ ” Six women doing wilderness hiking and camping with minimal experience? Joanne took her makeup kit, though I said at the time, “The bears couldn’t care less what she looked like, only what she tasted like.”

When they made plans and even T-shirts saying “Mothers Mountain March,” I knew they were serious. And since our three sons were ages 5, 8, and 10, it truly was with a tear in my eye that I watched a white station wagon become a small speck on the horizon as the six mothers headed for the Smokey Mountains in 1978.

The original cast was my wife Charme, her sister Bunny, plus Sylvia, Grace, Ellen and Joanne. They learned from their mistakes, becoming skilled minimalist hikers over the years that rolled by. Doing the entire Appalachian Trail became a goal when Bunny had breast cancer in 1982. “She needs a goal, something to aim for in the future,” said my wife.

Section-hiking a hundred miles a year, the Mountain Marching Mamas — their eventual trail name — accomplished that goal in 1998. The makeup kits were long left behind, but the MMMs were literally cover girls when they appeared on the cover of the Appalachian Trailway News magazine.

Even with the 2,100 miles of the AT behind them, the MMMs couldn’t stop hiking, their adventures soon taking in other trails, including some in Europe, as well as car trips with hikes in 15 states, selected by throwing a dart each year at a map.

But the real story of the Mountain Marching Mamas is not hiking but camaraderie. Those breath-taking mountain-top views were secondary to bonding as women, as people, as mothers, as problem-solvers. There were trials on the trails. They got separated once on the AT, one group going south and the other going north looking for each other.

But it was the quiet evenings around the campfire when they shared how their lives were going that centered them. They discussed family issues, their children’s evolving into adulthood and their interests in literature, art, culture, even politics. They were women of religion, reality, and diversity — one taught deaf children, another special-ed students, one was an Indiana farmer, others had citrus groves in Florida and soybean farms in Illinois.

The Mountain Marching Mamas bonding with nature and with each other was epitomized by the sheer joy of singing on the trail. Their favorite hymn had the perfect words: “When through the woods and forest glades I wander, And hear the birds sing sweetly in the trees, When I look down from lofty mountain grandeur, and hear the brook and feel the gentle breeze, Then sings my soul, my Savior God to thee.”

Their vocalizing once attracted a moose in Maine who seemed totally mesmerized by the sound.

The cast changed slightly over the years. Joanne was replaced by cousin Mary from Indiana and Grace had to retire. But the core four — Charme, Bunny, Sylvia and Ellen, plus Mary, are celebrating the 40th anniversary of that first hike, the one where I watched a white station wagon shrink to a speck.

Conversely, it was the Mountain Marching Mamas — trail names Mother Superior, Gypsy, Mama Kazoo, Orange Blossom, and Hoosier Mama — who grew as people, as wives, women and mothers over the years. The greatest gift you can give a wife, mother or female friend, be it Mothers Day or any other day, is the chance to fulfill their potential and chase their own dreams. These gals did just that.

In my opinion, the Jim Sides and Craig Pierce involvement in Rowan County politics has come to an end. Both... read more