Find your thrill at The Barn at Blueberry Hill 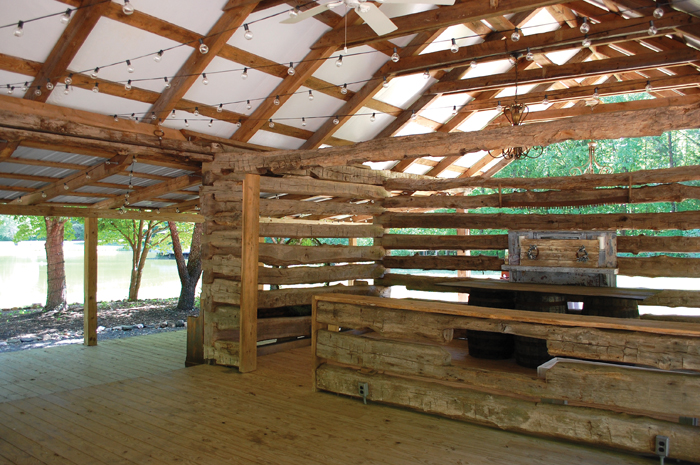 SALISBURY — When Jenna Russ and Kristen Hart were thinking about what to name their new wedding venue, they looked to the property for inspiration.

Russ said she thought first about naming it the Barn at Dogwood Hill because of a number of large, beautiful dogwood trees.

But then she saw the blueberry bushes.

Hart said that, when the venue starts hosting weddings, guests will be able to pick and eat blueberries directly from the bushes.

“So when they pick, we’re going to have a sign made for them to hold that says, ‘I found my thrill on Blueberry Hill,’” Hart said.

Hart and Russ have known each other since they were 6 and 7, respectively.

Hart said they didn’t get along in high school — “There could only be one queen in the classroom”— but bonded quickly when they started working together at Creative Cuts and Tans in Rockwell three years ago.

“We’re very close,” Hart said. “She’s more like a sister than a friend. She’s the first one I call, if it’s good or bad.”

Hart said that, although they’ve worked together at the salon, starting the Barn at Blueberry Hill is their first joint business venture.

“We both work full time with the salon, but we’ve adjusted our schedule to where we can put all of our clients into two or three days and devote the rest of the week to this,” Hart said.

“Their weddings are on a weekend day, but it’s an every day, all day, seven-days-a-week thing for us,” Russ said. “Each bride is different with each thing that they want. So we’re working through the week constantly here at the Barn, sometimes until 12:30 at night.”

Russ has had years of experience organizing weddings.

“I’ve actually done everything. The planning. The organizing. The decorating. The cake. The hair. The makeup. All of it,” Russ said. “So I knew what I was getting myself into.”

Hart said that, as the owner of Creative Cuts and Tans, she was excited to bring her business expertise together with Russ’ planning experience.

Russ said weddings packages at the Barn start at $2,500.

“The small package includes the renting of the barn and you’ll get the tables and the chairs and everything. But also one of our things is they’re going to get a special custom-made wood something,” Russ said.

Russ and Hart both describe themselves as “crafty” and have experience making wood projects.

“So they can either have a special sign made with their name on it and the day they’re getting married or they can have corn hole boards with their names on it. Something like that,” Russ said.

They said everything above the base package is pretty customizable, in terms of cost and services.

“And then if they want us to do everything, we’ll call around to different caterers, flower shops, to get the best price. And then we’ll let them know the next week what we found,” Russ said.

The Barn will be open for weddings and events starting May 20.

To honor the opening of the venue, Hart and Russ are hosting a grand opening May 20 at 3 p.m.

“We didn’t put an ending time on it because we really want people to see what it looks like at night, with everything lit up,” Russ said. “So as long as people are here, we’re going to keep going.”

There will be food and a live band.

“Most of the food is going to be blueberry inspired,” Russ said. “We have found blueberry barbecue sauce for ribs. We have blueberry salsa. We found all kinds of stuff.”

The Barn is located at 12505 Old Beatty Ford Road in Rockwell.