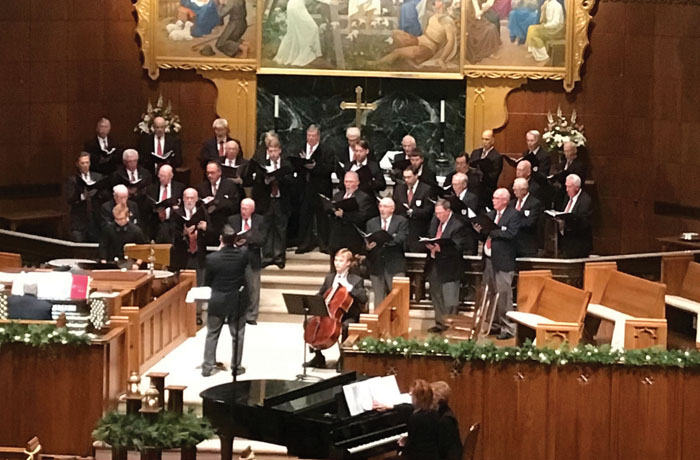 “The Christmas concert definitely made me feel that sense of accomplishment,” Harwood says, who took over from Rosemary Kinard, founding director. “It was a great way to kick off the Christmas season, and that was a good feeling for sure. I couldn’t be more pleased.”

Soon after, he turned his attention to the spring program, with one piece in particular in mind. “Come Ye Disconsolate” is a beautiful arrangement of an old hymn. Its lyrics include the line, “Earth has no sorrow that heaven cannot heal.” It was part of a reading session Harwood attended at Lutheridge during Music Week several years ago.
“No matter what’s going on, there’s God’s healing,” Harwood says.

Harwood praises Rollins for her collaboration in building the program. He says that each piece will have something to do with peace, prayer and healing — or a combination thereof. Instrumentalist and handbell ensembles will participate. He is also inviting representatives from other denominations and faith communities to participate.

“The idea of prayer, healing and peace is something that’s in all faiths,” he says. “There is healing to be found despite the difficult times. Now is the time we can present this concert of peace and healing. We need it.”

The theme has taken on special poignancy for the chorus following the death of longtime member Frank Goodnight, who died suddenly on April 6. The chorus sang at his funeral, and will dedicate the spring concert in his memory.

“Frank was such a dedicated and enthusiastic member of our group,” Harwood notes. “We absolutely wanted to honor his contributions with his concert.”

Installation of the Rev. Kelly Moore