Salisbury advances in soccer playoffs with another win over SR 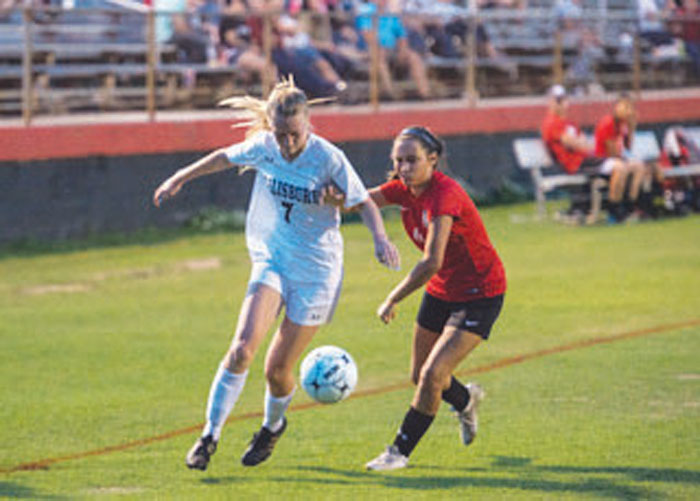 Photo courtesy of Jimmie Anderson Salisbury’s Freya Obermueller tries to control the soccer ball during Saturday night’s 2A state playoff game against South Rowan at Ludwig Stadium. Obermueller scored one of the goals in the Hornets’ 3-0 victory.

SALISBURY — Salisbury’s girls soccer season continues to read like a novel you can’t put down.

The undefeated Hornets spent much of Saturday evening walking on sunshine at Ludwig Stadium, where they scored three times in the first 18 minutes and swept past South Rowan, 3-0, in the second round of the 2A state playoffs.

“It was actually a tough game,” tireless midfielder Piper Muire said, moments after Salisbury (23-0) posted its 14th shutout and earned a third-round match with visiting C.D. Owen. “We had to come in hyped up and be ready for them. All we heard was how hard it is to beat a team three times. Well, we didn’t let that get into our heads.”

Instead, Salisbury bottled up 61-goal scorer Madison Henry and received Steel-Curtain defensive play from its back line and Muire. The Hornets outshot South (17-7) by a 21-10 margin and watched Henry crash two shots off the post and another off a crossbar.

“That’s bad luck for me,” the state’s most prolific scorer explained. “All I kept hearing from their sideline was ‘Watch No. 3, watch No. 3. Don’t lose Henry.’ It’s exciting that they know who I am, but it’s so frustrating when it ends like this.”

Salisbury always knew where Henry was. Defender Elle Kennedy thwarted the elusive sophomore with disruptive blocks on consecutive first-half chances in front with the Hornets clinging to a one-goal lead.

“Henry got loose in the box and Elle Kennedy made a succession of two or three saves in a row,” said winning coach Matt Parrish. “Those to me were the two most important moments of the match. If one of those goes in, it’s 1-1 — and hope is a dangerous thing. If you give an opponent a reason to believe, then anything can happen.”

South coach Kyle Neal praised his team for its memorable season. Just like no one predicted, the Raiders won 17 matches and dove two round deep into the playoffs.

“We just ran into a bit of a buzzsaw,” the third-year coach said after South suffered its third loss to Salisbury. “Honestly, if you take away the first 11 minutes that game is completely even. But they kept putting themselves in the right places to make plays. They had the luck tonight and we didn’t.”

Luck or not, Salisbury scored its first goal just 2:32 into the match. The play unfolded when Freya Obermueller launched a 20-yard shot that South keeper Michelle Rivera stopped but failed to secure. The rebound spun over to junior Ellen Simons, who banged home an uncontested eight-yard shot from the right side.

“The tone was set early,” Parrish said. “That allowed us to be more comfortable with our shape and our expectations for our defense. I think (assistant coach) Banks (Fisher) had us ready to go and we realized scoring first was going to be super important. What that goal did was force Coach Neal to rethink his shape and his ideas, playing from behind as opposed to being ahead.”

The lead doubled to 2-0 before the match was 10-minutes old. Senior Julia Honeycutt, making her first start since April 30, used a header to return Rivera’s short clearing punt, dropping the ball over South’s defense and back in Rivera’s lap. But the keeper mishandled it and left it available to Salisbury’s Anna Grace Woolly, who alertly pushed a shot into the net.

“There are 50-50 balls in every game,” Honeycutt said. “It’s just a matter of who wants to work more for them. We needed that goal to keep moving forward. And Anna Grace, she is just so composed in those situations. She got to the ball and just chipped the goalkeeper.”

Parrish called it a “work ethic goal,” and added: “Every goal that (Woolly) has, it’s like she slows the play down, takes a deep breath and picks her spot. That goal was the defining moment of the match.”

Seven minutes later, Obermueller closed the scoring when she followed her own shot, settled the rebound and bounced a ball past Rivera. “Then we kept pressing,” said Honeycutt. “We tried to get those fourth, fifth and sixth goals, but they didn’t come.”

The rest was up to Muire and the Salisbury defense — a no-nonsense unit comprised of Olivia Dagenhart, Lilly Rusher, Bethanie Stauffer and Kennedy. Senior Emily Mann made seven saves to record the shutout.

“That’s a testament to those four girls in the back and Piper Muire,” said Parrish. “She’s been a godsend. She is the prototypical holding midfielder.”

Muire was the best player on the pitch — and more than a handful for the Raiders.

“They were all really physical back there,” said Neal. “They were good at getting to loose balls and pouncing on them, then turning them into chances. I’m disappointed because our team did things this year that no South Rowan team has ever done. We scored more goals and won more games. And tonight they put it all out there.”

NOTES: Rivera made 10 saves for 17th-seeded South, which logged 14 shutouts this season. … Top-seeded Salisbury (120 GF/12 GA) next faces C.D. Owen (16-3-1 with five straight wins) on Tuesday or Wednesday. The Warhorses are the eighth seed out of Black Mountain and edged Salisbury nemesis CATA, 2-1, on Saturday.