Raptors fire coach Dwane Casey after another sweep by Cavs 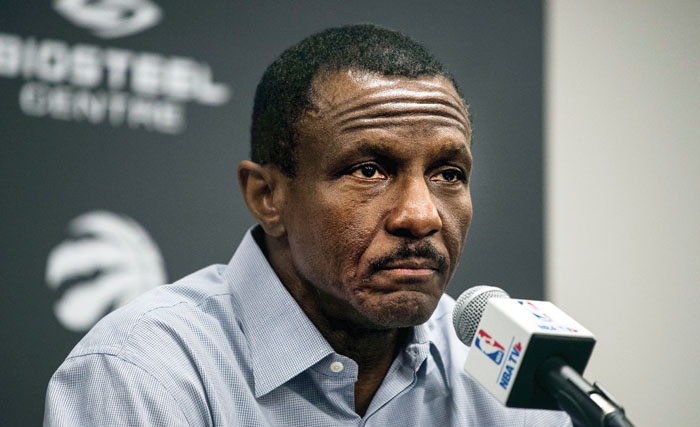 In this Wednesday, May 9, 2018 photo, Toronto Raptors head coach Dwane Casey speaks to media during an end-of-season NBA basketball media availability in Toronto,. The Raptors have fired Casey on Friday, May 11, 2018, after the team was swept in the playoffs by the Cleveland Cavaliers for second straight season. (Aaron Vincent Elkaim/The Canadian Press via AP, File)

By IAN HARRISON, Associated Press
TORONTO (AP) — Masai Ujiri believes Dwane Casey deserves to be recognized as the best coach in the NBA, but the Toronto president doesn’t think Casey should be leading the Raptors.
So the Raptors fired Casey, praising him on his way out the door.
Hours after the Raptors announced they were parting ways with Casey on Friday — days after the team was swept in the playoffs by the Cleveland Cavaliers for the second straight season — Ujiri said he doesn’t think he will ever work with a better person.
“Nothing in particular that coach Casey did wrong, but I think it was time for this to happen,” he said.
Casey led the Raptors to a franchise-record 59 wins this season as Toronto earned the top seed in the Eastern Conference for the first time. He posted a 320-238 record in seven seasons and is the franchise’s winningest coach.
“I hope coach Casey gets coach of the year, because he deserves it,” Ujiri said. “I saw everything he did here. I saw the job he did this year. He deserves it.”
But that wasn’t enough for Casey to keep his job.
James and Cavaliers coach Tyronn Lue said it was disappointing to hear that Casey had been fired, especially after the year the Raptors had.
“Probably within the last five years, I bet they’ve improved in winning percentage every single year,” James said. “But I guess their front office wants playoff success. That’s what it boils down to.”
On Tuesday, Casey was named coach of the year by the National Basketball Coaches Association, an award voted on by NBA head coaches. A media panel voted separately for the NBA’s coach of the year award, which will be announced June 25.
Under Casey, the Raptors won four Atlantic Division titles and advanced to the playoffs in five consecutive seasons. But Toronto couldn’t get past Cleveland, losing to LeBron James and the Cavs in each of the past three playoffs.
Ujiri said he spent “countless hours” evaluating the team in the days following this year’s defeat before deciding to fire Casey. It was the first time he’d had to fire a coach in more than a decade as an NBA executive.
“It’s the hardest thing I’ve done in my life,” Ujiri said. “In terms of collaboration, I don’t think I’ll work with a better person. Maybe my dad. This guy is phenomenal. A listener, a learner, a performer and a real person.”
Ujiri had little to say about who his next head coach might be, but said he would be “open” to considering a wide range of potential candidates.
“We’ll start that process right after I finish here,” Ujiri said. “We’ll look everywhere. I’m not ruling out anything. We’ll do a thorough job.”
Ujiri denied reports that Casey had precipitated his firing by seeking a contract extension. Casey had one year remaining on a three-year, $18 million dollar extension he received in June, 2016.
Toronto’s assistant coaches remain in their roles, Ujiri said.
“All of them are with us for now,” Ujiri said. “Obviously some of them will get interviews. We’re going to go through that.”
After Toronto’s playoff exit last spring, Ujiri demanded a “culture reset,” leading a greater emphasis on ball movement, depth, and 3-point shooting. On Friday, Ujiri said he wants his new coach to continue that style moving forward.
“I hope we can because you try to get those kind of players to fit that mode,” Ujiri said. “Hopefully there’s a smooth transition but a new coach is going to have his style, he’s going to have his voice.”
Earlier this week, as they cleaned out their lockers, All-Star guards Kyle Lowry and DeMar DeRozan spoke positively about Casey.
DeRozan credited Casey with all of his success while Lowry called Casey “one of the best coaches out there.”
Still, Lowry was dejected by the team’s playoff performance, calling it a “wasted year” after a third straight elimination at the hands of James and the Cavs.
“We felt like we could possibly make the NBA Finals,” Lowry said. “That was our goal.”
On Wednesday, Casey insisted “the gap is closing” between the Raptors and Cavaliers.
“A lot of folks have run up against Cleveland in the last few years and had the same challenge and it went down the same way,” he said. “That’s the mountain this organization has to climb.”
___
AP Sports Writer Tom Withers in Cleveland contributed to this report.
___
More AP NBA: https://apnews.com/tag/NBAbasketball