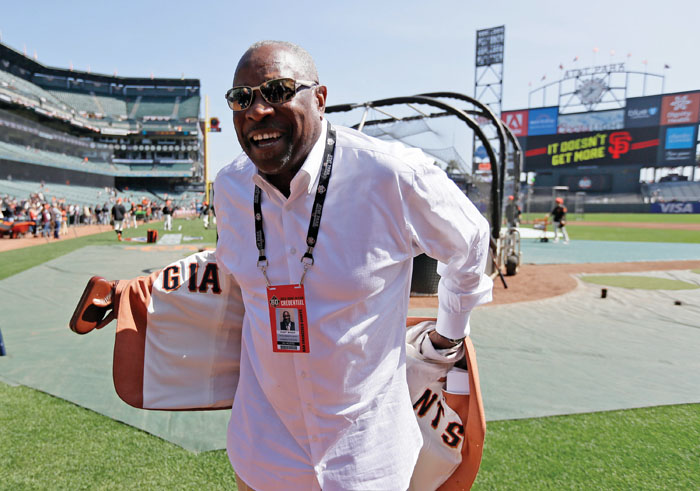 FILE - In this April 3, 2018, file photo, former manager Dusty Baker shows off the lining of his sport coat before the start of an opening day baseball game between the San Francisco Giants and the Seattle Mariners in San Francisco. Baker lost his job with Washington after last season, when he guided the Nationals to a second straight NL East title. It has been a blessing of sorts. Baker never forgets to remind himself of his good fortune, even during the down times in his big league baseball career spanning a half-century. Sure, he still wants to manage and go out on his own terms when the time comes. (AP Photo/Eric Risberg, File)

BERKELEY, Calif. (AP) — Darren Baker walks through the California dugout shortly before first pitch, finds his famous father in the last row of the stands, smiles and points. Dusty Baker nods and gives his college freshman son and second baseman the peace sign.

Then Darren is off to play another game, his dad now watching him regularly at last after all those years of Baker managing in the major leagues and bouncing around the country.

He lost his job with Washington after last season, even after the Nationals won a second straight NL East title.

It has been a blessing of sorts for Baker.

“I haven’t been home to see the hills green in Sacramento here in a long time,” Baker said. “The hills are always brown when I come home. It’s pretty cool, it’s real cool.”

He never forgets to remind himself of his good fortune, even during the down times in a big league baseball career spanning a half-century. Sure, he still wants to manage — and go out on his own terms when the time comes. Preferably with a World Series title that has eluded him as a manager.

These days, out of uniform once more, he is finding the positives.

Baker has received encouraging words from many of the African-Americans he admires most: Hank Aaron, Willie Mays, Joe Morgan, James Brown, Al Attles.

“We are good friends,” said Attles, the former Warriors player, coach and general manager now serving as an ambassador for the winning franchise. “Don’t let it get to you, you still have a lot to give. Make yourself available. Don’t get upset.”

Baker was out of baseball when his father, Johnnie B. Baker Sr., died in November 2009. Again when daughter Natosha got married in the summer of 2014. And now.

The 68-year-old Baker never gets used to this, but he now has endured firings by the Cubs, Reds and Nationals. Still, he walked onto the field at AT&T Park for the Giants’ series opener with Washington on April 23 with a grin and hugs to give. Stephen Strasburg hustled out onto the grass for an embrace.

“For him to be able to go out and watch his son I can just imagine. My dad being able to come and watch me all the time, coach me at every single level. It’s definitely probably a pretty cool moment to be able to do that, to be able to sit back and really watch your son play and enjoy that moment with him,” Nats star Bryce Harper said. “Dusty, you can imagine how good of a father he is to his son because he was a father to a lot of us in here. You looked at him like that, or the cool grandpa I guess you could say. He was easy to talk to, easy to get along with and you looked forward to coming to the park and playing for him every single day because he was that type of manager.”

Baker doesn’t believe his skin color has anything to do with him no longer working as a manager — despite many inquiries over the years that have gone completely unanswered — but rather his age and salary at this stage.

That doesn’t mean Baker is necessarily bitter, just a realist.

He is in the stands for nearly every home game to watch Cal’s new infielder with that sweet left-handed swing that Darren developed by mimicking home run king Barry Bonds for all those years. Baker was San Francisco’s skipper in 1993 when Bonds joined the Giants through a runner-up World Series finish in 2002, when then-3-year-old Darren wandered onto the field as a bat boy and was scooped up by J.T. Snow — who now broadcasts some of Darren’s games for the Pac-12 Networks — at home plate before he could get run over by David Bell coming in to score. The age requirement for bat boys changed that offseason to 14.

At Cal’s cozy campus ballpark, Evans Diamond, wife, Melissa, sits on the other side of the stands by design.

“She talks too much,” Baker said.

“I talk too much,” Melissa said separately later, smiling.

When Giants CEO Larry Baer and top executive Brian Sabean reached out to see if Baker might consider re-joining the organization, he let them know he had already made most of his summer plans around seeing Darren play. So Baker is serving as a special adviser to Baer, a position with plenty of flexibility.

“I missed so many of his games, so it was a treat this winter to get to see him play fall ball but in fall ball they’re playing against each other,” Baker said. “It’s been pretty cool watching him. Most of the time I run most people off so I can watch. They want to talk, they want to talk Giants or baseball, I say, ‘I’m here to watch my son.’”

“I told him: ‘Hey, the Bakers keep their word.’ My dad always was ‘you have to sign a contract, it’s your word,’” Baker said. “It’s not like that in the world but it’s like that in my family. When you say you’re going to do something you do it. … It worked out great and it worked out for me with the Giants. I got a nice triangle going here. That’s my Bermuda triangle.”

That would be San Francisco — he still has a home in suburban San Bruno — to Berkeley where Darren is to the Sacramento area where he resides most of the time.

“I certainly would think for Dusty it’s a perfect scenario for him if he’s not managing to be back with the Giants and also be able to watch his son play on the weekends,” Giants manager Bruce Bochy said. “It’s a pretty nice gig because he’s like all of us, we miss a lot of time watching our kids play but now he has the opportunity to do that. Yet to have a voice here with what we’re doing. So it’s good for him. He’s earned this.”

Baker and his son don’t get a lot of time together, speaking more by phone or grabbing quick visits after games.

“I’ll look up in the stands and give him a nod,” Darren said. “It’s weird how it kind of worked out for the better. I think he’s happy. I’m happy he’s here. A little bit (bittersweet). I think part of him wants to be in the game still obviously but he’s never really seen me play consistently. For my first year in college to be the first time for him to see me play is probably better.”

On this night, Baker is dressed in a camouflage thermal T-shirt and munching on raw peanuts from a place in San Francisco and pupusas he shares with anybody nearby who’s hungry. Two sons of Hall of Famer Orlando Cepeda are there.

Baker orders a cold beer and sits back in his fold-up chair. He cracks open a few more peanuts.