Marlins cool off Braves in Miami 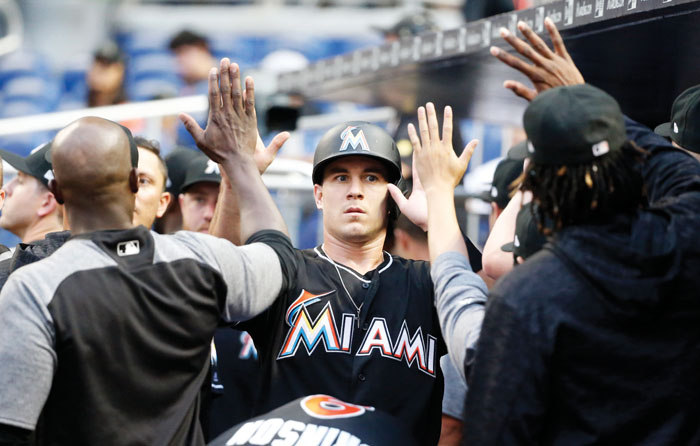 Miami Marlins' J.T. Realmuto, center, is congratulated by teammates after he scored on a ground-out by Starlin Castro during the first inning of a baseball game against the Atlanta Braves, Friday, May 11, 2018, in Miami. (AP Photo/Wilfredo Lee)

MIAMI (AP) — J.T. Realmuto had three hits Friday and wanted one more, even though his team didn’t need it.

Realmuto finished a triple shy of the cycle, but did plenty to help the Miami Marlins break a four-game losing streak by beating the Atlanta Braves 6-3.

No Marlin has ever hit for the cycle in the franchise’s 26 seasons, as Realmuto is well aware.

“I’ve been a triple away like four different times, and a double away once,” he said. “It’s very frustrating. It’s just one of those crazy stats. It’s really tough to get. But, oh well.”

Realmuto doubled and scored in the first inning, homered in the third and singled home a run in the fourth. He grounded out and lined into a double play in his final two at-bats, leaving his average at .325.

“He is, to me, one of the toughest outs in the league,” Braves catcher Kurt Suzuki said. “I mean, the guy’s a good player — really good player.”

Ozzie Albies hit his 12th homer for the Braves, who had a three-game winning streak snapped. They had won eight consecutive road games.

Starlin Castro hit his second homer and drove in two runs for the Marlins, and Miguel Rojas had three of their 14 hits.

Phillies starter Jake Arrieta allowed five hits over 7 1/3 scoreless innings, and they led 1-0 until Neris allowed a one-out single, Conforto’s third homer and a homer to Devin Mesoraco on the next pitch.

CHICAGO (AP) — Willson Contreras had two homers, two doubles and drove in a career-high seven runs on his bobblehead day to lead the Cubs over the crosstown White Sox.

BALTIMORE (AP) — Manny Machado hit two home runs, including his eighth career grand slam, as Baltimore won its third straight. Machado ripped a two-run shot in the first inning off Jake Faria (3-2) and made it 8-1 in the seventh with a drive off Ryne Stanek. Machado has three home runs in his last two games and 12 for the season.

The A’s had lost three in a row before roughing up Sonny Gray (2-3), their former ace. The Yankees acquired Gray from the A’s before last year’s trade deadline for outfielder Dustin Fowler and two minor leaguers. Making his first start in the majors, Fowler singled in his second at-bat against the player he was traded for.

CLEVELAND (AP) — Andrew Miller, activated from the disabled list before the game, gave up Salvador Perez’s two-run homer in the seventh inning and Kansas City rallied from a 9-4 deficit to beat Cleveland.

TORONTO (AP) — Luke Maile hit two homers, including a two-run shot in the 12th inning that gave the Toronto Blue Jays a 5-3 victory over the Boston Red Sox on Friday night.

Maile’s drive off Boston’s Brian Johnson (1-2) improved the Blue Jays to 5-0 in extra innings after they overcame a superb outing by Red Sox starter Chris Sale.

Curtis Granderson walked to begin the 12th and Maile followed with a drive to right.

Asked where the game-winning homer ranked among his career highlights, Maile said it was “probably number one.”

Maile also hit a game-tying homer off Sale in the seventh. It was the first multihomer game of his career. Maile went 3 for 5 with three RBIs.

Maile, who came in without a home run since May 31, 2017, redeemed himself for a throwing error that led to the Red Sox taking a 3-2 lead in the fourth.

Brock Holt reached on a two-out fielder’s choice and scored from first base after Maile couldn’t hold a third strike against Sandy Leon, then threw high to first base.

“That obviously felt terrible,” Maile said. “That was the dumbest play of my entire career.”

Maile told right-hander Aaron Sanchez he’d do what he could to take his pitcher off the hook after the errant throw.

“He was like ‘Hey, I’m going to get you back for that,’” Sanchez said. “I didn’t think it was going to be like he did it two times.”

Maile tied the game in the seventh, snapping a streak of 15 consecutive outs by Sale with his first homer of the season.

“He left it out over the plate just a little bit for me,” Maile said.

Sale matched his career high by striking out 15 over a season-high nine innings. The left-hander allowed three runs and six hits, and walked none.

“That was impressive,” Red Sox manager Alex Cora said. “That slider was the best of the season. He was outstanding.”

Sale is the third pitcher in Red Sox history to strike out 15 while walking none. Pedro Martinez had four such games while Roger Clemens had three.

Sale struck out six straight batters over the fourth and fifth innings, getting all six swinging.

“He threw a couple of sliders tonight that were just crazy,” Maile said.

Boston’s Hanley Ramirez tried to score from first base on a two-out double by Martinez in the third but ran through a stop sign from third base coach Carlos Febles and was thrown out at home plate.

Xander Bogaerts homered off Sanchez to begin the fourth, his fourth.

Boston has lost its past three extra-inning games.

Maile’s passed ball on the dropped third strike was Toronto’s first of the season. The Blue Jays began the day as the only team in the majors without a passed ball in 2018.

Toronto is 17-0 when scoring at least five runs.

Toronto DH Kendrys Morales snapped a career-worst 0-for-28 slump with a leadoff double in the second.

Red Sox: 2B Dustin Pedroia (left knee surgery) had seven at-bats in an extended spring training game Friday and is expected to join Triple-A Pawtucket Monday or Tuesday. … OF Jackie Bradley Jr. sat for the third straight game. He is 5 for 50 in his past 16 games with no extra-base hits and 24 strikeouts. Cora said Bradley is likely to return to the lineup Saturday.

Blue Jays: RHP Marcus Stroman was placed on the 10-day disabled list because of a sore right shoulder. Stroman had a late start to spring training because of shoulder pain. He’s 0-5 with a 7.71 ERA in seven starts. “I haven’t been myself out there at all,” Stroman said. … Toronto optioned LHP Tim Mayza to Triple-A Buffalo and recalled RHP Joe Biagini and Gaviglio from Triple-A. Biagini is expected to start in Stroman’s place on Sunday.

Red Sox: LHP David Price (2-4, 5.11) makes his first start in nine days after missing a turn because of Carpal tunnel syndrome. Price allowed a season-worst nine runs, at Texas on May 3. He’s 11-1 in 16 career starts in Toronto.

Blue Jays: RHP Marco Estrada (2-2, 5.21) pitched six shutout innings at Tampa Bay in his previous start but is winless in his past three outings. He allowed a season-worst five runs against Boston on April 26.