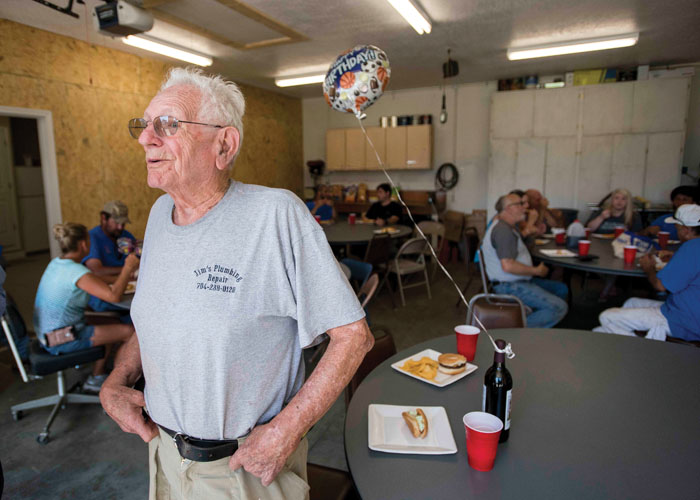 Friends of Rodney Callaway threw a surprise cookout Friday afternoon, one day before he turned 87 years old. Callaway, who works for Jimmy Lambert at his plumbing business, Jim's Plumbing Repair, has not slowed down in his later years of life. Jon C. Lakey/Salisbury Post

Before lunch, Callaway had connected two lavatories, helped install a water heater and well pump, and traveled down to Rockwell to assess a potential job.

“I wondered why I was so honored that I had to go everywhere,” Callaway said Friday, thinking about all the attention Lambert seemed to be heaping on him.

Lambert was trying to make sure Callaway had enough to do before delivering him to Bob Glover’s house. There, Glover, all his workers and others were preparing an 87th birthday luncheon for Hot Rod.

“This has been quite a surprise,” Callaway said.

Lambert’s ruse for getting Callaway out to the Glover’s house was they had to install a toilet. Callaway bought it without question.

“It’s not like I never put one in before,” he said.

Today is actually Callaway’s 87th birthday. He started work as a plumber for Cohen Plumbing & Heating Co. in 1956 and has been licensed for plumbing since 1964 and heating since 1968. He’s a master plumber and heating contractor.

Callaway tried retirement — briefly — but he has been working 16 years now for Lambert, owner of Jim’s Plumbing. Callaway doesn’t recommend retirement for anyone.

“You’ll get bored,” he said. “It’s just great to have a purpose in the morning when you get up.”

Plumbing isn’t the only thing on Callaway’s plate. He serves on the Veterans Honor Guard, and he is a supervisor for officials with the North State Athletic Association, an organization he has been involved with for almost 50 years.

He drives a Chrysler Sebring convertible, and his great-grandson always wants to put the top down. Not that Callaway ever argues the point.

It’s no doubt a carryover from his Air Force days, but Callaway loves to attend air shows where the Thunderbirds fly. For the past several years, Callaway also has become a bit of a wine connoisseur, enjoying a glass most evenings when he’s back home.

“I enjoy the hell out of life. I really do,” Callaway said.

Some time back, because his grandson told him he should be writing down all the stories he had, Callaway bought a computer and taught himself how to type the correct way, not the hunt-and-peck technique.

So far, he has reached 40,000 words and is still going. He writes everything out in longhand first, then types it into the computer.

Callaway never would have thought he could set down that many words, he said, “but it comes easy.” He laughed, recollecting how his grandson, now long grown, was an incessant talker as a kid.

“It’s not like he didn’t get it honest,” Callaway said.

Callaway likes to rise about 6 in the morning. Between 7 and 7:15, he arrives at Hughes-Southeastern Supply, where he spends the next hour or so drinking coffee, reading the morning newspaper. and shooting the breeze with the men and women coming in and out.

About 8:15 a.m., Lambert will call Callaway and tell him the materials he needs for that day’s work. Having Callaway already at the plumbing store has saved Lambert countless trips.

Lambert and Callaway had worked together at Cohen Plumbing & Heating. Lambert also would work evenings on the side. “It used to be Jim’s Moonlight Plumbing,” he explained.

When he decided to open a business of his own, Lambert said he was scared, so he asked his old friend, Hot Rod, to join him.

“It was meant to be,” Lambert added.

Bob Glover and the employees of R&L Glover Enterprises Inc. are like family to Lambert and Callaway. They’ve worked on many projects together, and Lambert calls Glover “the smartest builder in Salisbury.”

The surprise luncheon Friday included hamburgers, hot dogs and cake. There was a simple present on the table in front of Callaway — one of his favorite bottles of wine with a balloon attached.

Callaway’s father was superintendent of building and grounds at Catawba College from 1942 to 1958. He died when he was only 51.

Callaway starred in football at Boyden High School in Salisbury. He played tackle and end, and he was an All-State selection as a senior in 1950.

Callaway is the only surviving member of the Boyden High team that played in the first game in Ludwig Stadium in 1949 — a 6-0 victory over Charlotte Central.

Graduating from Boyden in 1951, Callaway earned a football scholarship to the University of South Carolina, but his stay there was brief. He served in the Army Guard from 1949 to 1952 and the Air Force from 1952 to 1956.

One of Callaway’s claims to fame while in the Air Force was that he was one of 12 men to have worked on the first air-to-air guided missile, the Falcon, or GAR-1 (Guided Aircraft Rocket). He said he spent six months in training on the weapon at Hughes Aircraft Co., the manufacturer, then went on to 15 months at Eglin Air Force Base in Florida.

Callaway and his wife, Julia, have been been married more than 65 years. The last couple of years have been especially rough for Julia, who has Alzheimer’s. She resides at the Brookdale assisted living facility.

The couple have three daughters — Sandra, Susan and Kim — and a grandson, Jonathan, the once nonstop talker who served in the Army for 10 years before being medically discharged.

Jonathan now lives in Liberty, Missouri, a suburb of Kansas City, and works for the government. He is close to earning his master’s degree in computer science.

“I’m proud of him,” Callaway said.

In his family, Hot Rod is known to everyone as “Papa.”

Callaway will tell you he has lived the greatest of lives, but there have been a few health blips along the way. He fully recovered from a stroke, and he also has undergone bypass surgery.

“I’ve tried durn near everything — some of it I didn’t like,” Callaway said.

This summer, daughter Kim will be taking Callaway to Disney World. He also plans a trip to Kansas City in July when Jonathan receives his master’s degree.

You better believe Hot Rod will be traveling with the top down.