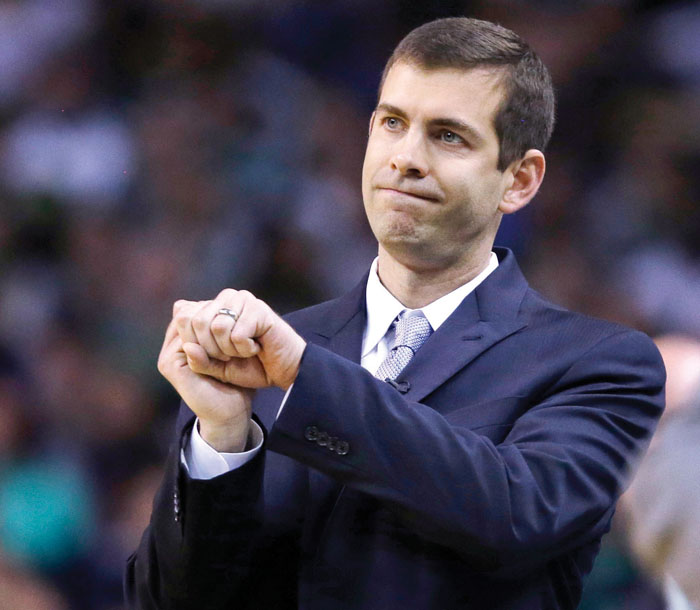 FILE- In this Wednesday, May 9, 2018 photo, Boston Celtics head coach Brad Stevens gestures during the first quarter of Game 5 of an NBA basketball playoff series in Boston. In just his fifth season Stevens has endeared himself to a championship-driven city after helping Boston make in improbable run back to the conference finals. (AP Photo/Charles Krupa, File)

By KYLE HIGHTOWER, AP Sports Writer
WALTHAM, Mass. (AP) — When Brad Stevens accepted the Celtics head coaching job five years ago, he didn’t allow himself to get caught up in thinking about how he could add his name to the franchise’s rich history.
He was too busy trying to figure out how to avoid being buried under it.
“You realize that if you’re going to break records here, you’re probably going to break bad ones,” he recently said. “Because none of the good ones are reachable.”
While achieving Red Auerbach status may not be on Stevens’ radar, in just his fifth season there’s no question the 41-year-old is also beyond being the wide-eyed former Butler University coach who arrived in Boston.
In a timeframe that has often already swallowed up most first-time NBA coaches, he’s managed to endear himself to a championship-driven city by helping Boston make an improbable run back to the Eastern Conference finals.
The Celtics seemingly had their championship hopes derailed following the season-ending injuries to both of their offseason additions in Gordon Hayward and Kyrie Irving.
Yet, Boston won 55 games during the regular season and increased its win total for the fifth consecutive season under Stevens.
Despite having a roster that was down to just 11 healthy players by the end of their second-round win over Philadelphia, the Celtics enter their conference finals rematch with Cleveland on Sunday with a 7-0 record at home this postseason.
They are also the first team in NBA history to make it back to this point without their leading scorer from the regular season (Irving).
Most of the NBA community was taken aback after Stevens failed to receive a single vote from his peers when the National Basketball Coaches Association gave out its coach of the year award. The honor went to Toronto’s Dwane Casey, who was fired Thursday after his team was swept in the East semifinals by the Cleveland Cavaliers.
Stevens has always downplayed the attention placed on coaching awards. He said that he thought Casey deserved the honor and didn’t expect him to be without a job for long.
Boston’s successes this season aside, Stevens said comfort remains a commodity this profession.
“I don’t think that I would ever define anybody in the coaching or playing shoes probably as comfortable,” he said. “You’re just focused on what’s next. But it is basketball. There’s only so much you can do.”
But it’s also clear that one of the reasons that Casey lost his job was the Raptors’ inability to challenge the Cavs in the postseason. Toronto was also swept out of the playoffs by Cleveland last season.
Most of the credit for Boston’s run thus far surely belongs to veteran Al Horford and the Celtics’ corps of young players, including Terry Rozier, Jaylen Brown and rookie Jayson Tatum.
Stevens agrees with that assessment and has remained true to his style by blending into the background in public, instead waiting for the huddle or practice to make his voice heard.
He believes his team’s mental toughness and grit have carried it more than anything he’s done.
Horford said Stevens hasn’t shied away from putting their young players in pressure situations.
“I think a lot of our guys have been thrown into the fire. I think it’s been designed that way so guys can just develop and learn as they go,” Horford said. “But I think that one of the things that helps them is the way that coach helps them prepare and the way that he teaches them the game.”
There is also at least one person watching from afar who thinks a lot of the credit belongs to Stevens. And it just happens to be the same player he will spend the next few weeks trying to stop: LeBron James.
From Stevens’ ability to draw up plays out of timeouts, to his management of late-clock situations, to getting the best out of his roster, James has long been a fan.
“I think they are one of the most well-coached teams in our league,” James said. “No matter who has played for them, he can put guys in position to succeed and get the most out of whoever has been in their lineup over the past few years. It’s not just this year.”
Stevens said he’s focused on living in the moment.
“From our standpoint, I feel like it’s been a lot of fun,” he said. “We talked about it prior to the playoffs; nobody should love a challenge more, nobody should have more fun doing it. I think our guys have done a good job with that.”
And though he may never say it, so has their coach.
___
AP Sports Writer Tom Withers in Independence, Ohio contributed to this report.
___
More AP NBA: https://apnews.com/tag/NBAbasketball
___
Follow Kyle Hightower on Twitter at http://www.twitter.com/khightower

Raptors fire coach Dwane Casey after another sweep by…