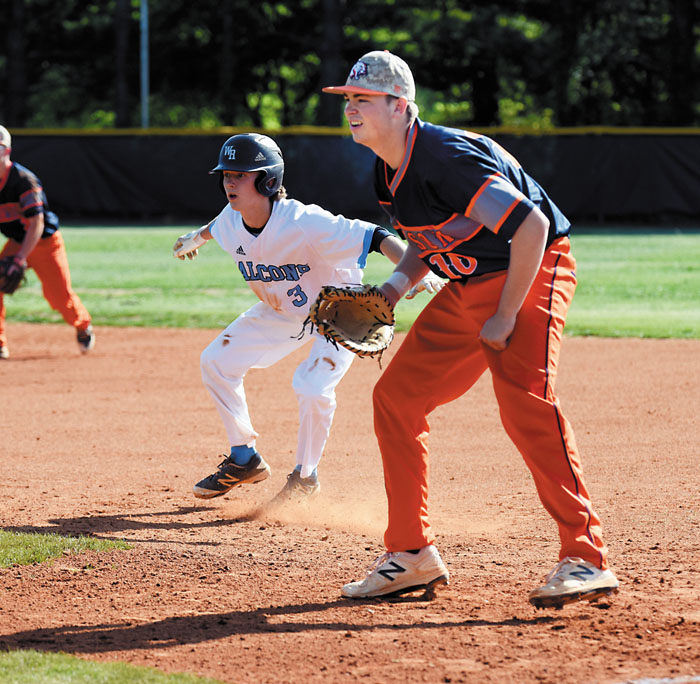 The fifth-seeded Cougars plugged in Friday night, then rapped out 16 hits and trounced visiting Eden Morehead, 13-3, in the second round of the 3A state playoffs.

“Cauble’s been getting on us about hitting,” junior Cole Hales said after Carson (23-5) advanced to Tuesday’s third-rounder at Marvin Ridge. “We don’t feel like we’ve provided enough runs for our pitchers. It’s a great pitching staff, but we need to do more for them.”

“This is what we were trying to do against West,” he said. “We were just way out in front. So we made a little bit of an adjustment at the plate tonight, put the ball in play and hit it really good.”

No one put up better numbers that center-fielder Brycen Holshouser, a senior who went 4-for-4 with three RBIs — the last on a game-ending single in the bottom of the sixth inning.

“I haven’t done this in a while,” Carson’s leadoff batter said, moments after reaching base five times, scoring three runs and boosting his average to .275. “It was just a matter of trusting myself. I didn’t care where I hit it tonight, as long as they were falling in.”

The Cougars secured their eighth consecutive win — and fifth by the mercy rule — when courtesy runner C.P. Pyle trotted home from third base on Holshouser’s screeching, two-out single to left field.

“I knew we were getting up there, but I didn’t realize it was 12-3 at the time,” he said. “When I saw players running out of the dugout onto the field, that’s when I knew. But I swear, I didn’t know before then.”

The loss ended 12th-seeded Morehead’s season on a sour note, but the moment wasn’t lost on coach Jeffery Roberts.

“It’s the first time we’ve ever won 20 games and made it to the second round,” he said, after the Panthers closed up shop with a 20-9 record. “I guess that makes it a great year.”

It does. The guests opened the scoring with an unearned run against winning pitcher Maddux Holshouser in the top of the first. Carson returned fire when Brycen Holshouser stroked a leadoff single against right-hander Cam Woods, took second on Cam Prugh’s sac bunt and third on Owen White’s groundout. With two away, he scurried home on a wild pitch. “I thought the bunts actually got things going for us,” Cauble said after the Cougars executed four sacrifice plays.

Then came a 92-minute weather delay — an extended wait that saw lightning, thunder and light rain that took a toll on both pitchers. Woods surrendered two runs on four hits in the Carson second and Holshouser issued a walk and back-to-back run-scoring doubles to Noah Yeatts and Jarred Simpson in the Morehead third. “But after all that,” Hales said, “Maddux relaxed himself, got settled in and pitched like he normally does.”

Did he ever. Holshouser, braiding an upper-crust fastball with a whole farmer’s market of off-speed pitches, set the Panthers down in order in the fourth, fifth and sixth innings. He retired Morehead’s last 10 batters, six of them on strikeouts, and breezed to his ninth victory.

“We got on him early, but then he got in a groove,” said Roberts. “Once his curveball starting working after the rain delay, he was really tough to hit.”

The Cougars had no such problem against Morehead relievers Logan Dodson and Noah Blackwell. They batted around in the last of the fourth and scored five times, with key swings delivered by Hales (leadoff double to right-center), Clayton Gilmore (RBI-single) and Luke Barringer (sac fly). An inning later, Prugh’s two-out, two-run single to center made it 10-3 and White’s subsequent triple upped the lead to eight.

“I don’t know how well they’ve hit all season,” said Roberts. “But they were a good-hitting team tonight.”

Blackwell relieved in the sixth and pumped hi-test on the blaze. First-baseman Logan Rogers initiated the winning rally with a bounce single up the middle and reached second on a wild pitch. Garrett Alewine’s flare single to left provided a 12-3 lead before Brycen Holshouser jerked a game-ending grounder down the left-field line.

“We have a little motto going around our team,” he said with a post-game grin. “Get After It. That’s all that was.”

NOTES: Carson had at least one hit in every inning but the third. … Maddux Holshouser pitched a complete-game three-hitter and made 84 deliveries. … Fourth-seeded Marvin Ridge (22-5) has won 10 straight games after tripping Weddington, 6-2, in the second round. Carson, 12-1 in its last 13 decisions, was edged 3-2 by the Mavericks in the second round of the 2016 playoffs.