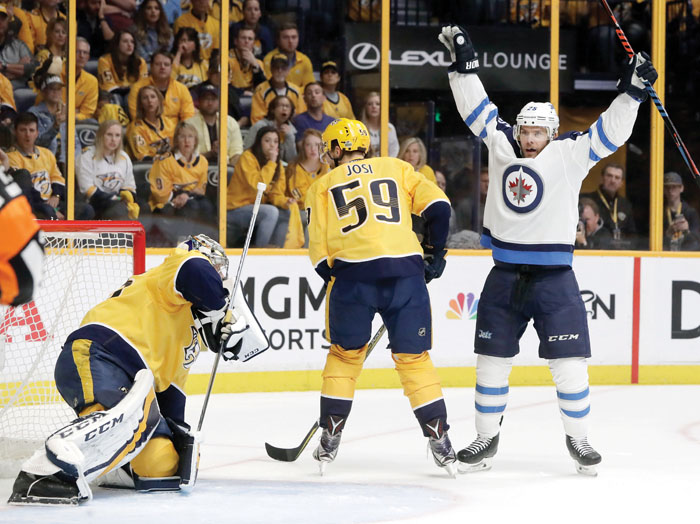 By TERESA M. WALKER, AP Sports Writer
NASHVILLE, Tenn. (AP) — The young Winnipeg Jets have grown up fast this postseason, so quickly that now they are headed to the first Western Conference final in their short history after knocking off the NHL’s best team in the regular season.
Tyler Myers and Paul Stastny scored 2:06 apart in the first period, and the Jets stunned the Nashville Predators 5-1 on Thursday night in their first Game 7 — continuing an amazing run for a team swept in its previous two playoff appearances.
“The telling stat for me in this series is we played four games in here and never lost in regulation against the best team in the league,” Jets coach Paul Maurice said. “That’s what you worry about with a young team. It’s a physical series. We’ve got some skaters. … But that’s a difficult thing to do, to get out on the road … to play well in here as consistently as we did, it’s impressive.”
Stastny finished with a second goal and an assist, and Mark Scheifele also had two goals. Blake Wheeler and rookie Kyle Connor each had two assists.
Connor Hellebuyck made 36 saves for Winnipeg, which won three of four games in Nashville after missing the Presidents’ Trophy by three points to the Predators.
The Jets now host Vegas in Game 1 on Saturday night in a conference final nobody could’ve predicted when this season started.
“I like it,” Hellebuyck said. “I’m excited, and looking forward to it.”
P.K. Subban scored for Nashville, now the ninth Presidents’ Trophy winner in 10 years not to win the Stanley Cup.
The best season in Predators history ended earlier than a year ago, but in the same fashion on their own ice. They lost to Pittsburgh in Game 6 of the Stanley Cup Final last June.
Pekka Rinne, Nashville’s Vezina Trophy finalist along with Hellebuyck, was chased for the third time in this series after giving up two goals on seven shots. He lasted just 10 minutes, 7 seconds for the quickest exit by a starting goalie in a Game 7.
“It’s heartbreaking,” Hellebuyck said on seeing Rinne pulled.
Rinne tried to take responsibility for the Predators’ season ending far earlier than they expected.
“The biggest moment of the season, it’s a terrible feeling,” Rinne said. “You let your teammates down, and that’s what happened tonight. That’s tough to swallow.”
These teams combined for 231 points in the regular season, making this series the two best teams on points ever to meet in a series before a conference final. This was the third Game 7 all-time for Nashville with a big edge in experience over the Jets playing on this stage.
Nashville also brought out the star power once again with Sheryl Crow singing the U.S. anthem and former NFL Titans running back Eddie George waving the towel to rev up the crowd. A couple catfish hit the ice before the puck dropped.
The Predators took five of the first six shots, then the Jets stunned the crowd. Myers squeezed a wrister between the post and Rinne’s left skate for a 1-0 lead at 8:40 of the first. Then Stastny put a backhander off Rinne and into the net 2:06 later for a 2-0 lead on just seven shots.
Nashville coach Peter Laviolette didn’t hesitate and pulled Rinne for Juuse Saros , trying to snap the Predators out of a slow start while saving his timeout. Laviolette called the goals “fluky.”
“There’s not a lot of things that you can do if a game’s not going your way if you can’t use your timeout,” Laviolette said. “It was way too early to use a timeout at that point. Again, I just tried to send the game in a different direction, put a pause in the game and send it in a different direction.”
Subban started the rally with his fourth power-play goal of this series with a big one-timer from Ryan Johansen over Hellebuyck’s stick at 15:54. Subban then pointed to the Nashville bench and once there yelled at his teammates.
In the second, the Jets simply dominated keeping the puck in the offensive zone and outshot Nashville 6-2. Only Saros making save after save kept it 2-1 until Scheifele’s snap shot for his 10th goal this postseason from the left circle with 2:10 left in the period. That was the first goal Saros had allowed in four appearances this postseason.
Stastny sealed the victory with his sixth goal this postseason on the Jets’ lone power play at 11:59. Scheifele added an empty-net goal with 2:33 left.
Wheeler said the Jets will take a night to celebrate a thrilling win over Nashville that was every bit the series they expected.
“It’s too bad one of us had to be knocked off here,” Wheeler said. “But night’s like tonight, you try to really soak it in and enjoy it. And then, wake up and get ready for a big game on Saturday.”
NOTES: Scheifele scored seven goals in Nashville, setting a record for most road goals in one postseason series. Scheifele topped 10 others tied with six on the road in a series, including Sidney Crosby. … Jets coach Paul Maurice now is 3-0 all-time in Game 7s all on the road. … Laviolette is 5-3 in Game 7s, and Nashville is 1-2 in Game 7s all-time.
UP NEXT:
Game 1 of Western finals against Jets in Winnipeg.
___
More AP NHL: https://apnews.com/tag/NHLhockey
___
Follow Teresa M. Walker at www.twitter.com/teresamwalker