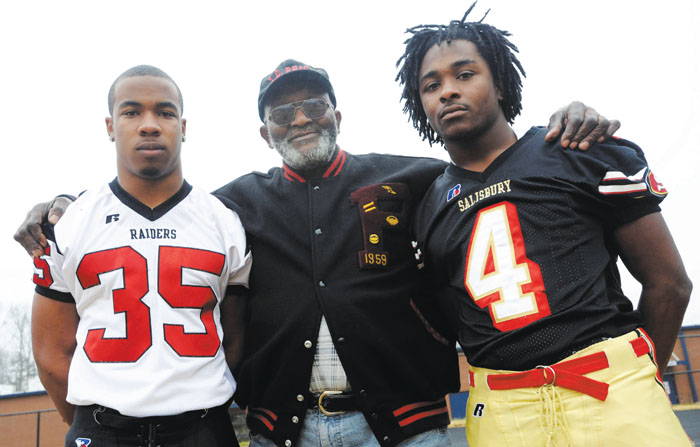 That’s a lot of years. They pile up fast. It means that the 18-year-olds from Price’s last graduating class in 1969 are 66 or 67 now and have moved past normal retirement age.

If there are any survivors from the 1940 Red Devils football team that won the open North Carolina state championship for all African-American schools — the team that didn’t allow a point in an entire football season, the team that the legends say never allowed an opponent to get past midfield —  they’d be in their mid-90s now.

There surely are some survivors from Price’s early-1950s football teams that lost just one game in three years and claimed another state title, but if you were 18 when the Red Devils celebrated beating Tarboro’s W.A. Patillo High in the 1952 title game on a frozen field, you’re 84 now. So that group dwindles every time the calendar turns. Hopefully, their stories have been handed down, in letters or in words or emails, to the children and grandchildren who carry the bloodlines of those amazing student-athletes.

For the city of Salisbury, there’s so much critical history tied to Price, and a lot of the vital links to that era have been lost in recent years.  Fred Evans, Rufus Little and John Mackey have passed. They were  wise men who knew so much. They lived those days when Price was a beacon of scholarship and athletics in a time of repression and they patiently and cheerfully shared their knowledge with people who grew up with zero knowledge of their feats.

It’s still a thrill for me, as my own sportwriting career winds down, when one of the Red Devils wants to share  precious memories, and John William Cathcart did that recently.

Still a familiar bearded face at Salisbury High ball games, Cathcart, who answers to J.W., is 77  now. His athletic glory days at Price — football, basketball and track — were in the late 1950s. Those are days that aren’t as well-documented as the 1940s and early 1950s because by the late 1950s Price wasn’t the athletic powerhouse it had once been. The Red Devils were playing in a tough league against much larger schools from Charlotte, Greensboro and Winston-Salem, and it was often a struggle.

“I was always jealous of my older brother, Freddie, because he played for Coach (S.W.) Lancaster when Price had those great teams,” J.W. said. “Freddie got to play on a state championship team, and Freddie got to score a lot of touchdowns. I always wanted to be like Freddie.”

The large Cathcart family had its roots in Rock Hill, S.C., but J.W.’s father died in 1945 when he was only 4 years old. Not long after that, the family relocated to North Carolina. They were scattered some, with family members winding up in Greensboro and Gastonia as well as Salisbury.

“You know, I had eight brothers,” J.W. said. “But just three members of the family grew up here in Salisbury and went to the Monroe Street School and to J.C. Price . That was Freddie, my sister Magdalene and myself. All three of us have been inducted into the  J.C. Price Hall of Fame now, and I think that was really something, all three of us making it. That’s something  I’m proud of.”

Magdalene Cathcart Fox,  81, is in the Price Hall of Fame for what she did on the basketball court in the 1955 and 1956 seasons.

“She could really shoot,” J.W. said. “As soon as she crossed halfcourt, she was in range.”

Freddie, a team captain, made the Price Hall of Fame for his football exploits. He hadn’t been retired from the Cone Mill winding department long when he passed away in 1999 when he was 67.

J.W. was a versatile athlete. Baseball was the first sport he loved. Baseball was the No. 1 sport for most Americans, black and white, in the 1940s and 1950s, and Cathcart’s uncles were fine baseball players. They were Steeles, his mother’s brothers, and they worked for the city and for Rusher Tire. They taught him the game.

Unfortunately, Price didn’t have a baseball team during Cathcart’s high school days. In the spring, the Red Devils would turn their attention to track and field.

“Sometimes we’d only take five or six guys to a track meet,” Cathcart said. “But we could always compete.”

J.W. had speed and expected to star in football as a Price ninth-grader, but Coach “Prof” Lancaster was a believer in experience and had other ideas.

“I wanted to run the ball like Freddie had, wanted to get the yards,” J.W. said. “But they had a set backfield already, and so Coach put me on the line. It could’ve been worse. At least, I was on the field. I was a pulling guard and we made a lot of yards on sweeps.”

By his junior football season in the fall of 1957, J.W. had convinced everyone he was a player. He was in the starting backfield and had become one of the team’s standouts.

He expected to have a big senior football season, but when that 1958 season started he was sidelined by an injury. He missed the first two games, a loss to Statesville’s Morningside High and a win against Concord Logan. In that Morningside game, with Cathcart injured, Price had to go to the air more than it wanted to. Price threw eight passes and had six picked off. But the team improve between Week 1 and Week 2.

The third game figured to be the toughest of the season against West Charlotte. That’s when Cathcart made his season debut, and Price stunned the Lions, 9-7, with Red Devils such as Edward Mitchell, Copell Johnson, Charles McGarity and Leander Steele turning in big efforts.

As it turned out, that West Charlotte game was the high point of a dismal 2-6-2 season. Price managed a 6-all tie with Reidsville Washington, but the Red Devils lost  to Asheville Stephen Lee, Winston-Salem Atkins, Winston-Salem Carver and Greensboro Dudley.

Price gave maximum effort in the homecoming game against Charlotte’s Second Ward  High— the North Carolina A&T band  joined the Price band for the halftime show — but the Red Devils completed only two passes and fell 20-12.

Basketball went better for Cathcart as a senior. He was healthy, and he teamed with players such as Mitchell and Douglas Heath to give Price a successful season.

“I wasn’t a big scorer, I wasn’t a shooter” Cathcart said. “I played a board game. I grabbed the rebounds.”

Cathcart’s dream was to become a coach, but opportunities were limited in 1959. After high school, he played a lot of baseball and softball in segregated leagues, but eventually his focus turned to making a blue-collar living.

But he helped pass his passion  for sports on to his children, his nephews and nieces and grandchildren.

One of those grandchildren, former Salisbury High athlete Brandon Cathcart, won the triple jump in the National Junior Olympics, was MVP of  the 2A NCHSAA track meet in 2005 and went to Ohio State on a track scholarship.

J.W.’s mother, Willie Mae, who worked for years at Star Laundry, passed away in the summer of 1998.

J.W. and his sister are the only surviving members of their generation of Cathcarts, but he remembers the old days with fondness and still looks forward to the next Salisbury basketball game.

“I always had the love for sports,” J.W. said. “My mother never could understand why I loved sports so much, but it was something that was just in me.”