Johnson part of six-way tie for lead at Players Championship 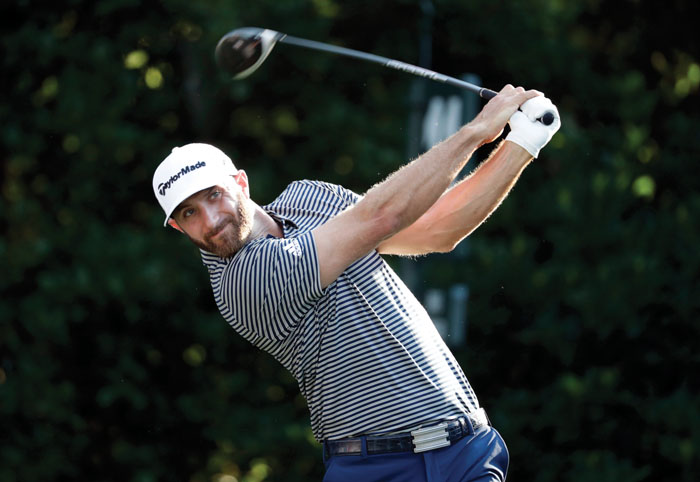 Dustin Johnson goes into today's round tied for the lead with three others. (AP File Photo/Lynne Sladky)

None was anywhere near the lead at The Players Championship.

McIlroy was the only player from those two groups who managed to break par. He shot 1-under 71.

The best golf — and there was plenty of it on an ideal opening round for scoring — was all around them.

Dustin Johnson, Webb Simpson and Alex Noren set the pace early. Matt Kuchar, Chesson Hadley and Patrick Cantlay joined them late. All were at 66, part of the largest share of the lead in the opening round at the TPC Sawgrass, and the most players tied at the top at The Players in 40 years.

“If you’re on your game, this course suits you,” Kuchar said.

That’s been the story of the TPC Sawgrass over the years — a design that doesn’t favor one particular style of play. That notion was on overdrive in warm sunshine and moderate wind, conditions so ideal that 12 players were separated by one shot after the opening round, and 68 players in the 144-man field broke par.

Woods wasn’t among them. He shot 72 in his first time at The Players since in three years. Neither was Mickelson, who had three double bogeys on the back nine and shot 79. Fowler shot 74.

“Toward the back nine, it started getting a little sparse,” Woods said. “I think they might have tipped back a couple and got a little sleepy.”

Or maybe they were just bored.

There was plenty of excitement elsewhere.

Johnson played like he was determined to keep the No. 1 ranking, which he could lose if he finishes 12th or worse. And he putted like he was fed up with not seeing enough go in. He tried the “AimPoint” method that some players use to help them read the greens. He liked the results.

Johnson started on No. 10 and went out in 31, and when he rolled in a 10-foot birdie putt on the par-5 second hole, he was on his way. Johnson only gave himself a few reasonable chances the rest of the way, though he was more than happy with his 66. It was his best score ever on the Stadium Course, and only his fourth time in the 60s.

“I was just not making enough putts,” Johnson said. “It’s definitely helped. Because I’m a feel putter, anyway, and so the way you’re doing it really is you’re just feeling. So it definitely works. I was pretty good the first time I switched. I had done it a little bit, like messing around with it. I’m very pleased with the way I putted today.”

Rookies and veterans alike were in the group at 67. The rookie was Keith Mitchell, who didn’t even know he was in the field until Paul Casey withdrew on Wednesday. Mitchell birdied his opening four holes, made seven birdies over his first 11 holes and was slowed only by a double bogey on the par-3 third.

The veteran was 51-year-old Steve Stricker, who still can’t decide whether to hang his hat in the big leagues or the senior circuit. He was irritated by a late bogey and failing to birdie the par-5 ninth, settling for a 67. That was enough to remind him he can still challenge the best.

“I’m not surprised,” Stricker said. “I expect to play well.”

So did Woods, even after his putting woes last week at Quail Hollow. Back on putting surfaces he knows, Woods made a number of key putts. Except for an 18-footer just off the green at No. 9 for eagle, however, most of them were for par. There was also a 10-footer to escape with bogey on the 18th hole after he hooked his iron off the tee into the water. Woods hit only five fairways.

Mickelson said he ran out of energy, which he feared coming into the week. He was hanging around until chopping up the 14th hole for a double bogey, and then adding a pair of doubles on the 16th and 17th with balls in the water.

The feature group in the morning wasn’t much better. Thomas had a 73 and Spieth appeared headed for a fourth consecutive weekend off at The Players when he shot 75, which included an eagle when he drove the green on the par-4 12th. McIlroy topped his group but was tied for 55th overall.

“It could have been better. I could have been probably a little worse, as well. It was probably a fair reflection of how I played,” McIlroy said. “It looked like it played easy out there, but our group didn’t feel like that with what we shot.”

Defending champion Si Woo Kim didn’t seem to worry that no one has ever won back-to-back at the TPC Sawgrass. He was at 7 under in the morning until a pair of bogeys late in his round dropped him to a 67.

Fowler said the size of the crowd was “definitely up there,” comparing it with majors or being in contention on Sunday.

“But I would say as far as a mass group actually following your group the whole way around, that’s up there as one of the biggest,” he said.

They just didn’t see a lot of great golf.

Vegas next in Western final after Jets stun Preds…