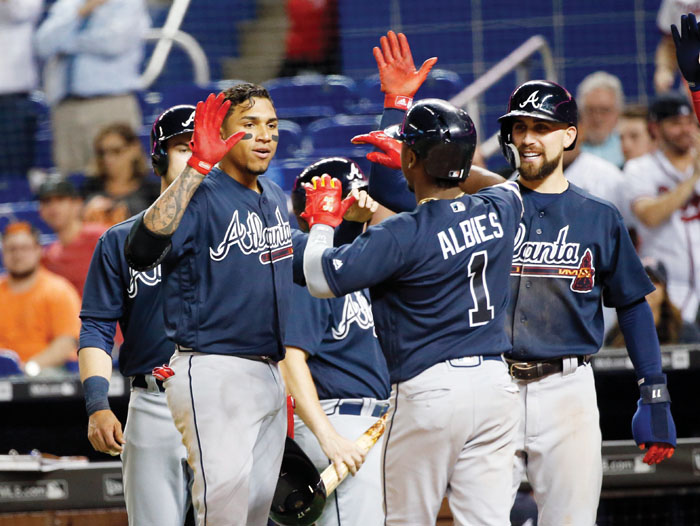 MIAMI (AP) — Three swings. That’s all it took for the Atlanta Braves to blow the game wide open.

And from there, it was another road rout for the NL East leaders.

Ozzie Albies hit Atlanta’s first grand slam of the season to highlight a seven-run sixth inning, Freddie Freeman had a career-high five hits and the Braves beat the Miami Marlins 9-2 on Thursday night for their eighth consecutive road win.

“It was a good one,” Freeman said. “Definitely one I’ll remember, first five-hit game. Took me a little bit, but the big one tonight was Ozzie and that grand slam.”

Freeman also homered for the Braves in that sixth-inning outburst, when Atlanta got all of its runs with two out. Albies also had a run-scoring single in the ninth to cap his five-RBI night.

During this 8-0 road streak, the Braves have outscored opponents 50-8 — winning four of those games by at least seven runs. Atlanta starter Mike Foltynewicz (3-2) was the latest beneficiary, getting the win after giving up three hits and one unearned run in five innings. Luiz Gohara got a three-inning save.

Manager Don Mattingly was not with the Marlins, away from the team because of a death in his family. Wallach, Mattingly’s longtime bench coach, filled in for the opener of the four-game series.

Mattingly is expected back Friday.

Marlins starter Caleb Smith (2-4) went 5 1/3 innings, allowing two runs on seven hits and striking out five. He was replaced by Drew Steckenrider, who retired Bautista for the second out of the sixth, then loaded the bases with the intentional walk and a conventional one to pinch-hitter Preston Tucker.

Albies unloaded them with one swing for a 5-1 lead with his 11th home run, and two batters — two pitches — later, Freeman added a two-run shot for his sixth of the season.

“That’s what the guy is capable of,” Braves manager Brian Snitker said. “That’s just him.”

Steckenrider was charged with six runs and got one out.

NEW YORK (AP) — J.D. Martinez hit a tiebreaking home run against Dellin Betances leading off the eighth inning, just beyond Aaron Judge’s reach at the right-field wall, and the Boston Red Sox rebounded after wasting a four-run lead to beat New York 5-4 Thursday night and send the Yankees to only their second loss in 19 games.

In another dramatic game before a sellout crowd, Boston moved back into a tie with the Yankees for the AL East lead at 26-11, the best record in the major leagues. The rivals have 13 more games this year but don’t meet again until June 29 in the Bronx.

Boston built a 4-0 lead against CC Sabathia as Hanley Ramirez drove in three runs with an RBI groundout in the first, an RBI single in a two-run third and a solo homer in the fifth just before a 55-minute rain delay.

But the Yankees tied the score in the seventh after loading the bases with one out against Heath Hembree.

Joe Kelly (2-0), who served a six-game suspension for hitting the Yankees’ Tyler Austin with a pitch last month, was booed loudly when he entered. Kelly forced in a run with a four-pitch walk to Brett Gardner, gave up an RBI single to Judge and a run-scoring groundout to slumping Didi Gregorius, then bounced a wild pitch off catcher Christian Vazquez as Gardner scored standing up.

Martinez, who drove in a run in the third with a liner off the glove of second baseman Gleyber Torres that was turned into a forceout, sent a 97 mph fastball from Betances (1-2) to the opposite field, just over Judge’s outstretched glove. Judge reached over the fence and looked for a fan interference call when a spectator’s glove touched his, but the ball was clearly over the wall and Martinez circled the bases with his ninth home run.

Austin flied out on the first pitch he saw from Kelly with a runner in in the eighth. Kelly threw a called third strike past Neil Walker to end the inning with two on — the seventh Yankees batter caught looking as New York repeatedly questioned the strike zone of plate umpire Stu Scheurwater.

A night after giving up Gardner’s tiebreaking, two-run triple in a four-run eighth, Craig Kimbrel struck out Gardner, then retired Judge on a flyout and Gregorius on a chopper that Kimbrel snagged on the left side of the infield for his 10th save in 12 chances.

Mookie Betts had three hits, raising his batting average to a major league-leading .361.

New York had won eight straight games overall and 11 in a row at home. Boston improved to 11-1 in series finales this season and is unbeaten in Eduardo Rodriguez’s seven starts.

Rodriguez allowed just one hit in five scoreless innings, a fourth-inning smash by Giancarlo Stanton off the glove of third baseman Rafael Devers. Down 3-0, New York loaded the bases with one out before Rodriguez threw a called third strike past Austin and retired Miguel Andujar on a flyout to the front of the warning track in right-center.

Rodriguez struck out eight — including six looking. He has a 2.25 ERA in six starts at new Yankee Stadium, third-best among opposing pitchers with at least five starts there behind Felix Hernandez (1.41) and Chris Sale (2.18).

Sabathia had the worst of his seven outings this year, allowing nine hits in four innings as his ERA rose from 1.39 to 2.23.

Booed in his final weeks as a Yankees player two years ago, Alex Rodriguez was cheered when shown on the video board while watching the game after the rain delay.

Torres slid headfirst and slapped the plate with his left hand to score the go-ahead run in the eighth inning Wednesday — the same arm he hurt last June 17 with a headfirst slide for Triple-A Scranton/Wilkes-Barre, causing season-ending Tommy John surgery. “Him going in the way he did last night certainly shows that there’s a confidence there that he’s good to go,” Yankees manager Aaron Boone said.

Red Sox: RHP Tyler Thornburg, coming back from surgery last June 16 to correct thoracic outlet syndrome, made his fifth minor league rehab appearance. He gave up two runs and two hits while getting two outs for Double-A Portland. He will join the Red Sox in Toronto on Friday for a bullpen session, then return to the minors.  … Slumping OF Jackie Bradley Jr. (.173) was not in the starting lineup for the second straight day and might not play Friday.

Yankees: 1B Greg Bird (right ankle surgery on March 27) played five innings in his first rehab game for Class A Tampa and was 0 for 3 with two flyouts and an RBI grounder. … OF Billy McKinney (left shoulder sprain on March 31) played seven innings in left field during his first rehab appearance for the Tarpons and went 0 for 1 with a groundout and two walks.