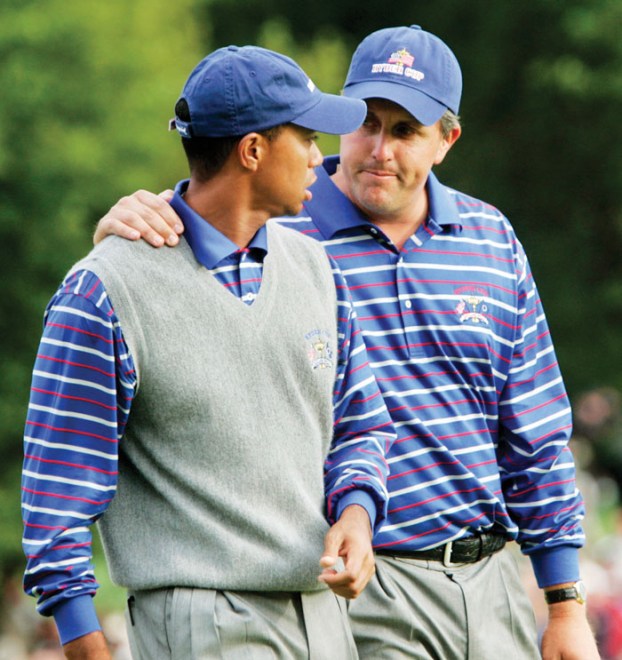 FILE - In this Sept. 17, 2004, file photo, U.S. team player Phil Mickelson puts his arm around partner Tiger Woods as they walk off the 18th green after they lost to Europeans Darren Clarke and Lee Westwood on the final hole of their foursomes match at the 35th Ryder Cup at Oakland Hills Country Club in Bloomfield Township, Mich. Woods and Mickelson are in the same group for the 37th time at The Players Championship. (AP Photo/Dave Martin, File)

PONTE VEDRA BEACH, Fla. (AP) — Their relationship has been softened by age.

The needle is sharp as ever.

Never mind that Tiger Woods and Phil Mickelson have only five victories between them over the last five years. It’s a big deal when the two best players of their generation are in the same group at any tournament, much less The Players Championship.

Mickelson, of course, wanted something even better.

“I look at the cover of the newspaper and the pairing is on there and the excitement that’s been going on around here, it gets me thinking,” Mickelson said Tuesday. “Why don’t we just bypass all the ancillary stuff of a tournament and just go head-to-head and just have kind of a high-stakes, winner-take-all match.”

Lefty was just getting warmed up.

“Now, I don’t know if he wants a piece of me,” he said, pausing for laughter, “but I just think it would be something that would be really fun for us to do, and I think there would be a lot of interest in it if we just went straight to the final round.”

They have played as a twosome in the final group just twice in their careers, and Woods won both times — in 2005 at Doral to return to No. 1 in the world, and in 2001 at the Masters when he completed his sweep of the majors.

So when Woods was told about Mickelson’s jab questioning whether he wanted a piece of him, Woods knew exactly where to go.

“First of all, big picture,” Woods said as his smile widened.

When a reporter thought Woods meant their record while playing in the same group — amazingly, the mark is 16-16-4 — Woods cut him off.

“How many times have we won on tour?” he said.

They have never been particularly close in the record book. Woods has a 79-43 lead in PGA Tour victories, 14-5 in the majors.

Matt Kuchar once told a story about how Mickelson would be dishing out his best material in the team room at the Ryder Cup, and if he ever didn’t have a comeback, he would simply reveal how many majors he has won to shut up the room — but not without surveying his audience.

“He can only say that if Tiger’s not around,” Kuchar said. “He has to look over both shoulders and make sure, because then Tiger gives him his number.”

They were never particularly close off the course, either.

Both will say that their relationship was overblown in the media, and there might be some truth to that. They lived on opposite ends of the country and had different lifestyles for so much of their careers. They got along fine because both are professionals, but it was never more than that.

There still were some fun moments.

One year they were in the locker room at the Byron Nelson Classic when Mickelson challenged Woods to anything at their disposal. How about pool? Pingpong? “How about anything that involves running,” Woods said, and he walked away leaving Mickelson searching for a comeback.

And there have been some tense moments.

Mickelson mentioned in a magazine interview going into the 2003 season that Woods used “inferior” equipment. Mickelson posted one of the great closing rounds in major championship history with a 66 to win at Muirfield in 2013, and when asked to comment on the round, Woods said only that the course was “gettable” that day.

Their most famous pairing was when they were partners in the 2004 Ryder Cup, and that didn’t end all that well. They lost both matches.

Woods is 42 with two children. Mickelson is 47, and the oldest of his three children started college last year. They still are competitive as ever, though both are statesmen in the game.

Mickelson has never failed to give Woods credit for his impact on the game, particularly the attention he brought to golf that resulted in mammoth TV contracts and prize money that made everyone rich.

“It was the most remarkable golf in the history of the game, and I think unrepeatable,” Mickelson said. “I think it was that good. I look at 2000 as being kind of the benchmark at the U.S. Open as being the greatest golf I’ve ever witnessed and I believe has ever been played. And it sucked to have to play against him.”

Lefty still got in a few jabs that year. He ended Woods’ six-tournament winning streak at Torrey Pines in early 2000. At the end of that year, he beat him at the Tour Championship to end four straight years of Woods winning when he had at least a share of the 54-hole lead.

They have been there for each other in tough times.

Woods reached out to Mickelson when his wife, Amy, was diagnosed with breast cancer. Woods told of Mickelson sending nothing but encouraging texts when Woods was struggling with his chipping in early 2015 as his back was still ailing.

“He offered numerous times to help me out with technique and just about it,” Woods said. “I said, ‘Yeah, you and I have the same philosophy in how we approach chipping and how we do it. I just can’t physically do it.

“But now it’s different. I feel better,” Woods said. “And my short game has turned around.”

By Brandon C. Williams Fantasy Sports Network Kevin Harvick is off to a start this NASCAR season as dominant as... read more