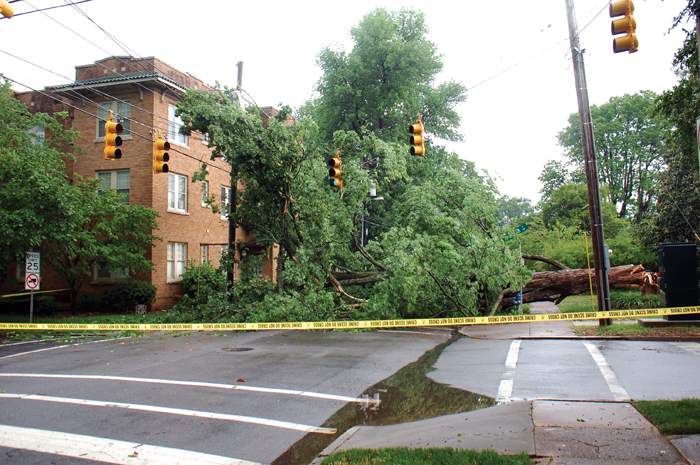 Heavy winds accompanying a thunderstorm early Thursday evening led to reports of many downed trees and power lines across the city, including this large maple, which fell across South Fulton Street at West Horah Street. That's Fairmont Terrace on the left.

The storm passed through the city about 6 p.m.

Close to 8 p.m., Duke Energy was reporting 19 locations with outages around Salisbury and Spencer, affecting fewer than 300 customers.

The storm brought down huge trees on both South Fulton Street and Mitchell Avenue.

A maple tree cracked at its base at 402 S. Fulton St. and fell across both lanes toward the three-story Fairmont Terrace building. Utility lines caught the top of the tree and probably saved Fairmont Terrace from significant damage.

Traffic had to be detoured around the South Fulton/West Horah intersection.

On Mitchell Avenue, a large tree fell near the street at the home of Al and Trish Dunn in the 600 block.