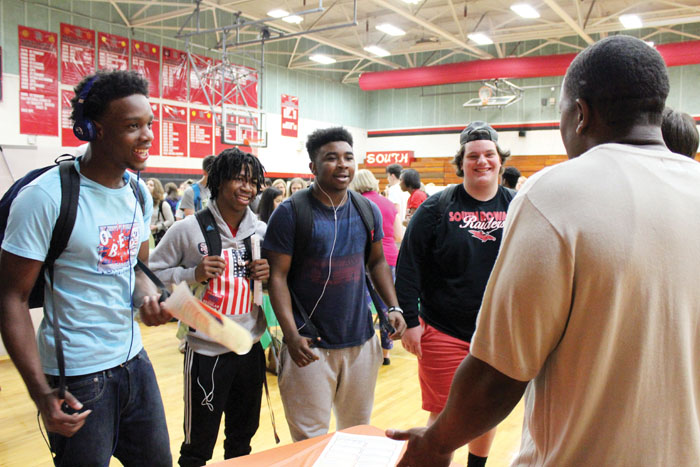 CHINA GROVE — Excitement was definitely in the air as South Rowan High School kicked off its first ever Career Fair for students in all grades. With over 800 students in attendance, Career Coach Brad Holda, who organized and directed the Career Fair, considered this a “huge success.”

Career Vendors from all fields showed up to inform students: from the popular health sciences, to photography, to automotive and even college pathway organizations like Crosby Scholars. With over 40 occupations represented, students were able to walk in and learn — with or without a plan for what kind of careers that might suit them.

Like most students at South, I attended with a general idea of where I would go and who I would talk to. Little did I know that a conversation with former NFL player Jerome Harrison would open new doors to amazing possibilities and that he would offer insight on steps for my future in a way I haven’t heard before. As a senior planning to go to college for graphic design, I was able to create a network at this career fair and jumpstart my future career with opportunities in the workplace by talking with vendors such as the Director of Marketing at Rowan-Cabarrus Community College, Paula Dibley.

I interviewed many of my classmates and found that there were many students that walked with an intended career but found something different. In 30 minutes, students would change their career based on talking to professionals in the field — which is much cheaper than spending $37,000 (the national debt average for college seniors), and four years to decide it’s not the field they wanted.

This was the case for senior Morgan Brown, who learned what opportunities are available in the physical therapy field. Many career pathways through Rowan-Cabarrus Community College were represented at the career fair for students like Morgan to explore, even if she intends to pursue the traditional four-year degree. Brown said “programs at RCCC would have been helpful” to her if she was not already on a four-year university track — such as a two-year physical therapy assistant degree you can get through RCCC. Brown said that “RCCC is overall a great option for finding careers” that fast track you into the workforce, as are many other options she didn’t know about until she attended the career fair.

Even if entering the workforce or finding a career was not in the immediate future, the career fair still proved useful to underclassmen as well. With an open mind, both freshman and sophomores attended the career fair in hopes of exploring options.

Sophomore, Renata Diaz-Ruiz gained more career clarity in preparation for career-based classes in her junior and senior years. She can take CTE courses at her school, or through the CCP/CTE programs offered at RCCC. Interested in art and nursing, Diaz-Ruiz was initially unsure of what possibilities or tracks were available to her. She learned that she wants to create art, but health sciences or nursing is where her heart is.

“In my (own) time I want to create my art, but I want to have a medical career,” Renata said.

Renata was able to discover a world of options at the career fair, which helped her plan ahead for the rest of high school. She also made connections in her field of interest.

Whether it be through planning, exploring or making connections in the work force, the South Rowan Career Fair proved to be a hit for aspiring Raiders. Many high school students don’t have the chances or opportunities to start early and turn an interest into a career. The career fair granted that access, and the students of South Rowan are destined to pursue great things in the future.

Angelina Palacios is a Senior at South Rowan High School.