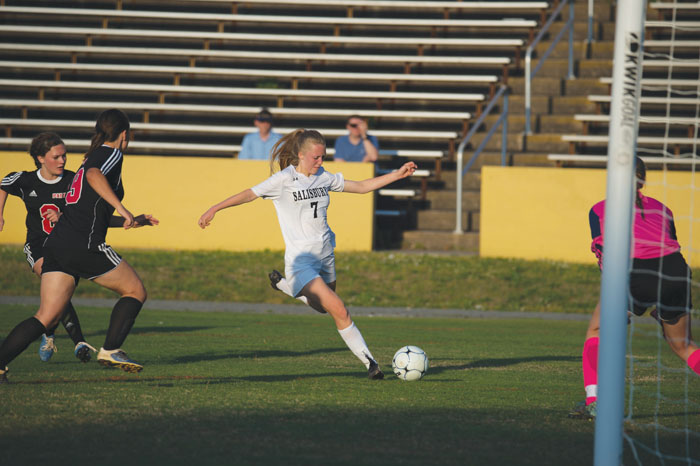 “The players in those games are generally guys,” Parrish said. “So I incorrectly assumed for a long time that this mysterious German kid was a guy.”

The German kid isn’t a guy. Freya (pronounced fry-uh) Obermueller is a girl —small, but quick as a lightning bolt.

“I finally met her for the first time when she was sitting out here at the stadium waiting for me,” Parrish said. “She wanted to know when soccer tryouts started. I told her they couldn’t start soon enough.”

Obermueller has helped transform what was expected to be a good Salisbury soccer club into a powerful one. With team leader Julia Honeycutt playing limited minutes  on Wednesday in the first round of the 2A state playoffs, Obermueller was the Hornets’ dominant player. She scored two marvelous goals and logged one sweet assist as the Hornets easily handled 32nd-seeded Morganton Patton, 6-1.

The top-seeded Hornets, with lots of talented freshmen sprinting alongside Obermueller, are 22-0. They break the county record for girls soccer wins each time they add another triumph to the ledger.

Obermueller also helped the Hornets immensely in cross country. One of the members of Obermueller’s host family, the Woollys, is runner/swimmer/soccer player Anna Grace Woolly. Woolly scored the first goal of Wednesday’s match.

It came after 10 minutes of sheer frustration. The Hornets had played all those minutes at the Patton goal-mouth, but they hadn’t been able to finish against sprawling, leaping, rolling Patton keeper Carrigan Causby.

Finally, Woolly blasted one home from a considerable distance.

“We had talked about testing their keeper whenever she came forward,” Woolly explained. “I saw an opening. I let it go.”

Parrish spent the early segment of the match staring in disbelief as the Hornets missed point-blank chances. Shortly after he screamed, “Wake up!,” Woolly delivered.

That first goal by Woolly loosened up the Hornets. It relaxed them. Then the goals started to flow.

“It was like their keeper was putting a finger in the dike and stopping the flood for a while,” Parrish said. “But it was a matter of time.”

Salisbury’s second goal came five minutes after the first. It was  the Hornets’ favorite set piece, executed one more time by freshmen Lillie Rusher and Piper Muire. Muire is adept at finding Muire’s forehead with a precise corner kick, and no matter how many defenders are swarming around Muire, she rises above them and converts the header.

The goal that stretched the lead to 3-0, just three minutes later, was sudden as a summer storm. Obermueller made a steal, settled the ball quickly, and slashed a wicked rocket past the keeper.

“We just wanted to keep putting a lot of shots on goal,” Obermueller said. “The opportunity was there.”

Obermueller also got the fourth goal, ripping a low liner into the back of the net.

The Hornets made it 5-0 before halftime on the first of two goals by freshman Caroline Cardelle.

“Piper Muire made it happen,” Cardelle said. “She took the shot and when it bounced off the keeper’s glove, I was following, and I was right there. I just tapped it in.”

The Hornets only scored once in the second half, as Honeycutt put in a 10-minute stint and Parrish got everyone into the game.

But that goal was a nice one. Obermueller swerved past, around and through retreating defenders before sliding the ball to Cardelle for an easy finish.

“I was playing for the shot,” Obermueller said. “But just as I started to shoot, I saw Caroline right in front of the goal.”

It was a point-blank, straight-on shot for Cardelle, the latest product from a great soccer family, and it might be the easiest goal of a career that’s going to include a lot of them.

That unselfish pass and easy finish put a smile on Parrish’s face.

Salisbury appeared to be headed for its 14th shutout, but  Bailey Mojica tallied late for the visiting Panthers (6-10-5).

“The first 10 minutes were frustrating and the last 10 were frustrating,” Parrish said. “It would be easy to nit-pick and find things to criticize about our performance. But in between those first 10 and last 10, we really moved the ball well. We played some solid soccer.”

Next for the Hornets will be a third meeting with county and Central Carolina Conference rival South Rowan, a 4-0 winner at Forest Hills, behind three more goals by striker Madison Henry, the state’s leading scorer.

“There’s some pressure on us as the No. 1 seed, definitely a target on our backs every game now,” Woolly said. “We’re undefeated, so everyone we play can play like they have nothing to lose.”

Salisbury will take on the Raiders at 7 p.m. on Saturday at Ludwig Stadium.

Parrish isn’t sure yet how much Honeycutt will play, but she’s improving. And he’ll also have the German kid.

“Our record is a testament to the overall ability, work ethic, consistency and perseverance of this team,” Parrish said. “They have been a perfect balance of upper and underclassmen, starters and role players, and most importantly a collective whole. They deserve a lot of credit.”