NASCAR for sale? Possibilities are limitless 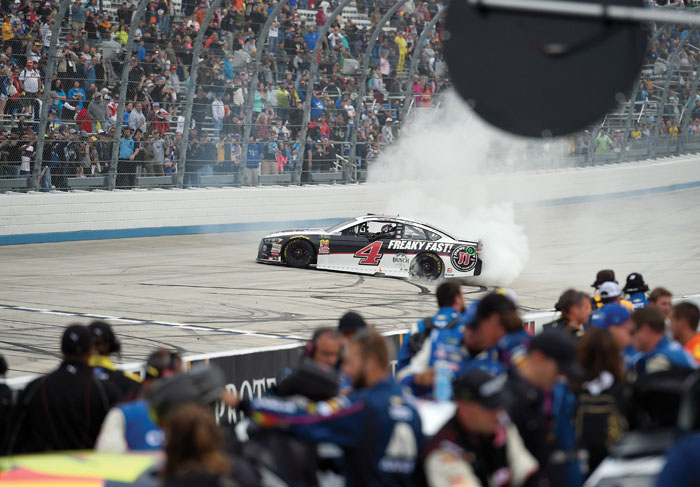 AP Photo/Nick Wass ... Kevin Harvick performs a burnout after he won the NASCAR Cup Series auto race, last Sunday, at Dover International Speedway in Dover, Del. What changes will be in store if and when NASCAR is sold?

News of the possible sale of NASCAR sent tremors through the motorsports community Monday.  Long timers in the sport started biting their nails almost immediately.

It’s hard to imagine the sport without a member of the France family at the helm, where they’ve been comfortably seated since NASCAR was a tiny sparkplug.

Still, change can open new doors of opportunity in a sport trying to weather a decline in ticket sales and TV viewership.  To be fair, that’s a malady that’s beginning to affect all professional sports, from football right down to curling.

But I have to admit, it’s especially interesting to imagine this particular sport under new ownership.  What would NASCAR look like if, say, McDonald’s took the reins?

Concession stands would undergo a swift makeover for sure – with breakfast now served all day.  But the facelift wouldn’t stop there.

For branding purposes, drivers may be forced to add a “Mac” prefix to their last names.  While Jamie MacMurray would be all set, it may take us a while to get used to Jimmie MacJohnson, Kevin MacHarvick, or Kyle MacBush.

And can you imagine instead of a champagne shower, the winning driver covered in a giant MacFlurry in victory lane?

What if Disney decided it wanted NASCAR?

With the help of Pixar, children would flock to the TV screen as today’s drivers are joined on the track by animated Disney characters in their own cars.  Imagine a heated screaming match between Brad Keselowski and Donald Duck.  It’s just what the sport needs.

A cable giant like Spectrum or Comcast could come up with the cash, but that would mean drastic alterations in NASCAR land for sure.

To begin with, rule changes could dictate that any driver with a mechanical problem during a race would have to wait on pit road until a licensed service technician arrives to repair the car – sometime between 10am and 4pm.

Walgreen’s could join with Subway to purchase NASCAR, guaranteeing thousands of smaller tracks would open on virtually every street corner.

And let’s not dismiss the possibility that the government could rush in and take over the sport.

Fans would immediately begin purchasing tickets through online ticket exchanges designed to offer more choice and save them money.

Yes, the possibilities are limitless.