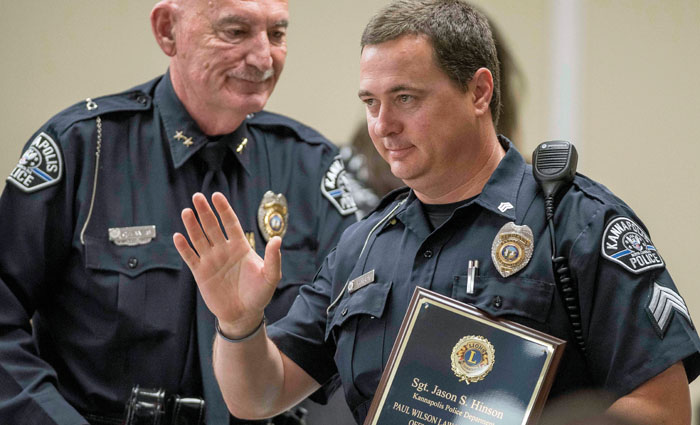 SALISBURY — Most days, the men and women in blue go about their day with very little thanks. But on Tuesday morning, local law enforcement officers received resounding thank you’s during the Salisbury Lions Club-sp0nsored Respect for Law breakfast.

The annual breakfast was held at First Baptist Church.

This year’s speaker was WBTV reporter David Whisenant, who talked about being a witness to the good that local officers have done in the community.

“As a reporter, I am an observer, in some ways a witness, and I’ve witnessed a lot of crime scenes and had a lot of interactions with law enforcement in my career,” Whisenant said.

He recalled an incident in 2017 in which a woman and her boyfriend overdosed on a sidewalk in downtown Salisbury. The veteran reporter said he was focused, like many, on emergency personnel reviving the couple.

But what most people didn’t see was a Salisbury police captain with a young boy in her arms. She’d scooped him up and taken him into a local store away from the harrowing scene of his mother unconscious on the street.

“I’ll never forget that moment. I couldn’t show that image on TV because it involved a child, but to me it showed the compassion and dedication on the part of law enforcement that is often not always seen by the public,” Whisenant said.

Days before that incident, Whisenant said he saw local officers comforting children at a motel whose mother died inside of an overdose.

He said one of the most high-profile cases that shows an example of the compassion of law enforcement is the Erica Parsons case.

“Because of the work of law enforcement, justice appears to be well on its way to being fully realized. A little girl who had no voice whatsoever in her own home is now loudly speaking about the consequences of child abuse,” Whisenant said.

He said it was the patient, deliberate and ethical work of the investigators that is bringing a resolution to the case.

“Despite the misguided criticism, the calls for a rush to judgment, investigators moved forward without haste, but with a determination to hear Erica’s voice and see that her death was not in vain,” he said.

“Law enforcement is one of the most noble of all callings, and oneof that few that can be said to be truly life-saving and life-changing,” Whisenant said.

The following officers were honored as Officers of the Year:

O’Brien has been in law enforcement since August 1995. He has over 800 hours of specialized training that include narcotics, leadership, crisis negotiation, field training, and active shooter.

Castor joined the Kannapolis department June 22, 2011, and is a field training officer, part of the Honor Guard and a traffic reconstructionist.

“He takes his position very seriously. He is an active leader,” said Chief Woody Chavis.

Chavis said Castor and his wife took it upon themselves to provide Christmas presents for a young girl who the year before had qualified to be part of the agency’s Shop With a Cop program. She wasn’t eligible the second year, and the couple knew she wouldn’t receive anything so they bought her presents.

Bizzio was born in Puerto Rico and raised in Miami. He joined the Salisbury Police Department as a patrol officer and the Landis department in 2016.

“Everybody loves to work with him,” said Chief Kenny Isenhour.

He said Bizzio is an asset not only to Landis police but has also helped other agencies with translating since he speaks fluent Spanish.

Morgan has been in law enforcement for 18 years, six of which was with the Salisbury Police Department. The majority of his time he’s served with the Highway Patrol. He’s also a sergeant first class with the Army National Guard.

Morgan does a lot of charity work and helps his fellow troopers.

In 2014, the Rockwell department sponsored Reichert during basic law enforcement training. She told Chief Hugh Bost if he ever had an opening, she wanted to become an officer with his department.

Bost said she recently lost her mother, helps take care of her father who lives in another state and has balanced all of that with being proactive in the community.

In 2014, Greene began as a detention center officer, then moved to patrol and in June 2014 became a detective with the Sheriff’s Office. He and his wife, Jennifer, have seven children. In his downtime, Greene competes in races, half marathons, and 5Ks.

He is in the middle of completing his master’s degree. Last year, he and fellow officers rode bikes to the National Law Enforcement Officers Memorial in Washington.

Jordan has 30 years of law enforcement service and also served as a traffic officer and member of the Special Response Team. Chief Jerry Stokes said Jordan serves his community well. He recently retired from the department.

Safrit, who has been with the department since July 2016, wears many hats including investigator, administrative assistant, and IT specialist. He began his law enforcement career in 2010.

Bowins is a 20-year Navy veteran. He has worked in law enforcement for NASA, the U.S. Department of Defense and the VA Police in Columbia, South Carolina. He’s been with the Hefner VA since 2015.

While on assignment in Charlotte, Bowins came upon a bus driver who was unresponsive. He and two others performed CPR on the driver until EMS crews arrived.

“He is passionate about police work and serving Jesus,” said Chief Chavis.

He started a ministry, Aqua 14, to reach out the homeless. Each week he coordinates and serves 100 meals for those in need.

Hinson even donated a kidney to a stranger. He initially set out to donate a kidney to the husband of a Kannapolis 911 communicator but wasn’t a match. When he became a match for someone else, he followed through with to the donation.