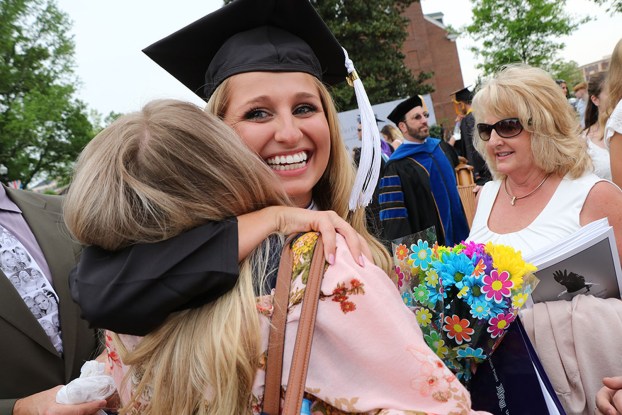 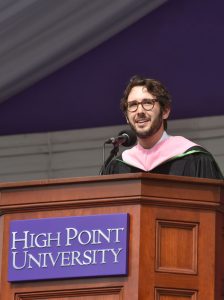 HIGH POINT – Before he became the internationally acclaimed singer, songwriter and actor that he is today, Josh Groban was afraid to sing in front of anyone, including his own parents. Today, he told more than 1,000 graduates — High Point University’s largest graduating class — and 10,000 guests in attendance that his fear propelled him to places of success. He charged the students to never back away from challenges and to always trust their instincts.

Groban, who was forced to the front of his chorus class at the age of 13, singing only on assignment, told the audience that fear is a great thing.

“I believe that it would be better to fail at doing something challenging, something worthwhile, and something I’m excited to show the world than to succeed doing something safe, something that wouldn’t actually inspire much at all,” he told graduates. “You learn with experience that some fear is the good stuff. Not all. But when the fear comes from a place of wanting to follow through with passion – something you believe in, it’s good. When it comes to your future experiences, as you enter the world with your knowledge and excitement, as you choose opportunities, always remember: if you aren’t scared, be worried.”

Having uncovered his passion for singing, Groban enrolled at Carnegie Mellon University and formed a plan. He was going to be a theater graduate and slowly work his way to Broadway before another opportunity arose – a record deal.

“You are here today because you said yes to the opportunity that High Point University offered you,” Groban told the graduates. “You took that wonderful leap when they offered it to you. And behind that were more ‘yeses’ and more times you could have not jumped at something when not jumping would have been so much easier and safer. When you’re not sure that someone else’s ideas for your life are right for you, when they tell you what you should do, it’s those gut-check moments that are valuable and often times hard to act on. Work that muscle. Don’t be afraid to hurt a little while you do.”

Groban shared the story of his first major performance opportunity. He was 16 years old, trying to become a professional singer, and he received a call from music producer David Foster. Foster asked if he would be able to fill in for a Grammy Award rehearsal and perform a duet with Celine Dion. Groban, feeling unprepared, declined the offer. But the producer called Groban back and demanded that he come perform.

“He called back because he heard something in me and saw what I didn’t,” said Groban. “We’re not always going to know when it’s the right time to say yes and the right time to say no. Surround yourself with people you trust and who get you. People who get your demons and believe in you, not just in what you have to offer them. Surround yourself with people who don’t mind saying it like it is. Keep them close. They have literally saved my life and career in more ways than they know.”

Groban also encouraged graduates to get past their nerves and forge ahead.

“Every day of the first few years of my career, I felt like I was faking it,” he said. “My confidence was a sham. I was a student and a professional at the same time. On stage, I was crushing it. Off stage, I was a ball of doubt. I’m sure you’ve all felt that during the course of your time here, and you’re sure to feel it when you leave. That is natural, it’s human and it’s okay. Plow through it.”

The singer concluded his speech with a serenade to the class of 2018, singing a piece from the musical “Sunday in the Park with George,” written by one of his favorite composers, Stephen Sondheim.

As is tradition at Hight Point University’s graduation, a bald eagle soared over the graduates at the end of the ceremony to symbolize the ideals of free enterprise, independence and the ability to pursue new opportunities in America.

Graduates also received a powerful senior send-off from university President Nido Qubein, who encouraged them to live lives of both success and significance.

“Everyone wants to live on top of the mountain, but all the happiness and growth occur while you’re climbing it,” Qubein told graduates and their families. “It’s the journey that counts. It’s the power of one. It’s the energy that comes with faithful courage. It’s your ability to achieve success in your own way. It’s your charge to light a candle where darkness prevails. It’s you, holding out your hand to the right and to the left adjoining hands with others to fill every community you enter with light. Never tell yourself you’re too old or too young to make it. Never tell yourself you’ve missed the chance to get it done or that you aren’t good enough. You can do it, whatever it is. You have learned about the art of the possible at High Point University. So, yes you can. You were created for a reason.”