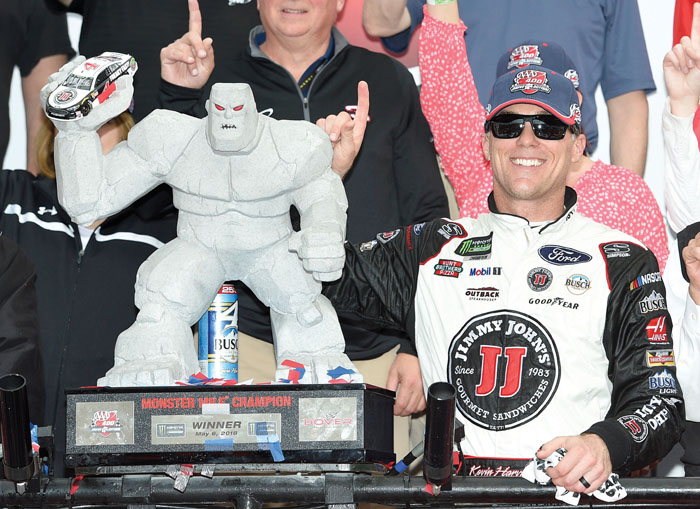 Kevin Harvick is off to a start this NASCAR season as dominant as LeBron James in basketball.

He’s pulled down four wins and eight top 5 finishes in the first 11 races of the Monster Energy Cup series. If he wins the KC Masterpiece 400 in Kansas, he’d be positioned well to threaten Jimmie Johnson’s 10 wins in 2007, the most in a year since the playoff era began in 2004.

Harvick is a good anchor for daily fantasy teams even with a steep $12,000 price tag at FanDuel and $11,000 at DraftKings. He has an average running position of 9.4 on the track, a number that tops the field since 2005 when loop data began to be charted. He was fourth in stage points earned in Kansas last year while also placing fourth in both points earned (85) and laps led (17) in 2017.

Harvick has ranked in the top 10 nine times and has a monstrous 741 laps led, compared with 498 for Kyle Busch. Busch and Joey Logano are ahead of Harvick in the series standings, as Harvick was stripped of points because of violations in his Ford during a win in Las Vegas.

DAYTONA BEACH, Fla. (AP) — The teams for drivers Austin Dillon, Clint Bowyer and Daniel Suarez have been penalized by NASCAR after the race at Dover.

Bowyer and Suarez were each hit with $50,000 fines for their crew chiefs and both teams lost their car chiefs for the next two races for rear window violations. Each team lost 20 drivers and owner points. Bowyer finished second and Suarez third on Sunday at Dover.

Dillon, the Daytona 500 champion, had his team hit with a $25,000 fine to crew chief Justin Alexander and his car chief was suspended for one race.

Bowyer and Dillon were already in NASCAR’s playoffs this season because of victories. Suarez, who is winless, fell three spots to 20th in the standings and is 27 points out of the postseason cutoff.

Justin Allgaier, who won the Xfinity Series race at Dover, had his team fined $25,000, his crew chief suspended two races and lost 25 driver and owner points for a parts infraction: JR Motorsports blamed car damage on the last lap for the problem and said it would not appeal. Xfinity driver Jeb Burton had his crew chief fined $10,000 and his car chief was suspended for one race for a splitter issue.

Yet another trip to the disabled list brings fear of whether Clayton Kershaw’s seven-year run of fantasy dominance is about to hit a slow decline.

The signs are there: Kershaw’s hits per nine innings rate of 8.2 is his highest since his rookie year of 2008 and while his 9.8 strikeouts remain among the best in the game, it is the first time since 2013 that he’s not whiffing better than 10 per nine innings. Equally distressing is the 1.4 home runs per nine innings (HR/9) Kershaw sported before going on the DL on Sunday, a slight uptick from the 1.2 HR/9 he recorded last year.

Donovan Mitchell’s postseason performance (24.4 points, 5.9 rebounds, 4.2 assists, 1.5 steals) will put him in the top 15-20 of most fantasy basketball drafts this fall. The potential rookie of the year won’t be in the elite category of guards, but if the Jazz standout is sitting there in the early-to-middle part of the second round, Mitchell will make a great foundation player for any fantasy team.

This column was provided to The Associated Press by the Fantasy Sports Network, http://FNTSY.com