DG Martin: Who has the biggest house? Try ‘The Last Castle’ 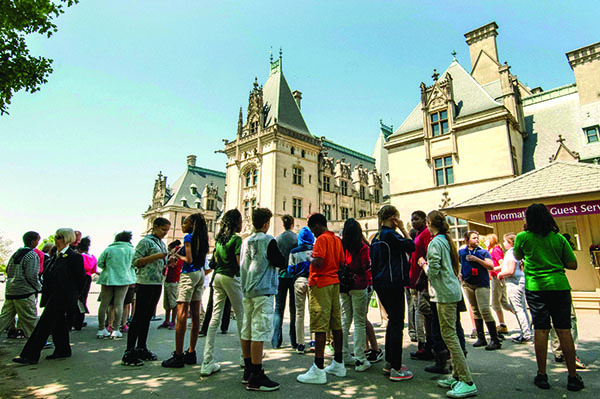 Here is a newspaper headline from last week: “A ‘palace’ in NC: One of the state’s largest homes is for sale.”

Must be the Biltmore House in Asheville, I thought. Then I kept reading. No, the 16,000-square-foot home in the headlines is in Rougemont, a high-end Durham suburb. You can buy it for $6.95 million.

But if you owned it, you would not come close to having one of the largest houses. Just for comparison’s sake, the White House has 50,000 square feet. President Donald Trump’s Mar-a-Lago has 62,500. Whitehall, the Palm Beach house Henry Flagler built for his North Carolina bride, Mary Lily Kenan, is 60,000.

Another large North Carolina-connected house, Duke Farms, built in New Jersey by James B. Duke, had 58,000, until it was taken down in 2016.

But if you are still thinking Asheville’s Biltmore House, you have the right idea. With a reported area of 175,000 square feet, it is by far the largest privately owned house in the United States.

It is also one of the country’s most visited attractions. The mansion with 250 rooms is packed full of art, antiques, architecture, books, collections of vintage clothing and other accessories representative of the Gilded Age. The house is part of an 8,000-acre compound containing expansive gardens and landscapes, the first managed forest in the country, a deer park, miles of level paths and walking trails, a section of the French Broad River, and a winery that enjoys a growing reputation.

On a typical day thousands of visitors pay up to $75 for a one-time visit to the attractions. If it sounds expensive, it is really a bargain compared to a trip to France to see something comparable.

How did this world-class attraction come to be in North Carolina?

In her latest book, “The Last Castle: The Epic Story of Love, Loss, and American Royalty in the Nation’s Largest Home,” Denise Kiernan tells the story of how and why the Biltmore House was built and how its gradual transformation to a high-class tourist attraction made possible its survival.

In 1888, George Washington Vanderbilt, a young wealthy bachelor, and his mother came to Asheville to take advantage of the healthy mountain air. On horseback rides around the surrounding mountains and forest, George was enthralled. Through agents, he began the secret and systematic purchase of thousands and the tens of thousands of forest and farmlands. Ultimately, more than 100,000 of these acres became the nucleus of the Pisgah National Forrest.

George also decided to build a home for himself and his mom. The idea began modestly, but after a trip to the Loire Valley in France with the famed architect Richard Morris Hunt, plans expanded. The designer of Central Park, Frederick Law Olmsted, was brought on to design the landscape and Gifford Pinchot agreed to plan for the massive forests.

The house opened in 1895. Kiernan told me recently that it might have been simply a 275-room “man-cave” for the then aging George. In 1898 he married Edith Stuyvesant Dresser and in 1900 their daughter, Cornelia, was born at Biltmore.

In Kiernan’s opinion, Edith is the great hero of the Biltmore story. When George died in 1914, financial challenges had surrounded the Biltmore operation. Edith took the lead. She secured and followed expert advice that required painful cutbacks and sales of beloved projects. Later she arranged for the sale of most of the forest properties.

In 1924, Cornelia married British diplomat John Cecil. Although their marriage did not last, their sons, William and George, and their families took charge of the aging castle. They developed a sustainable and profitable business model that assures our state will have our country’s largest privately owned house for many years to come.

D.G. Martin hosts “North Carolina Bookwatch,” which airs Sundays at 11 a.m. and Thursdays at 5 p.m. on UNC-TV. Today’s guest is Stephanie Elizondo Griest, author of “ All the Agents and Saints: Dispatches from the U.S. Borderlands.”

This may be Year of the Woman