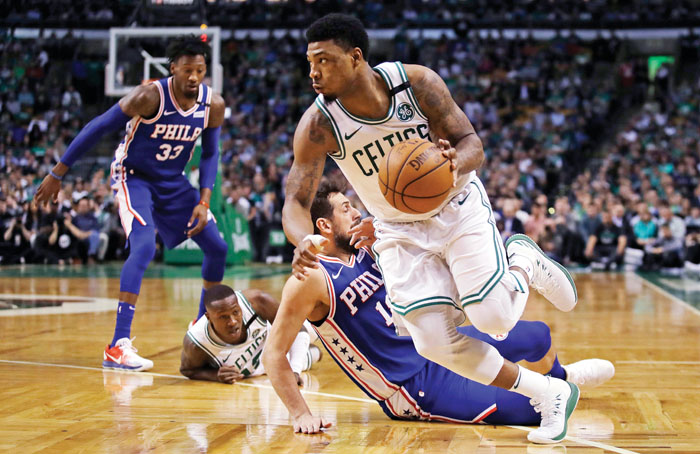 BOSTON (AP) — With 2.4 seconds left and the Boston Celtics leading by two, Marcus Smart had a chance to clinch Game 5 of the Eastern Conference semifinals and eliminate Philadelphia by making a pair of free throws.

He missed the first.

He could have made things more difficult for the 76ers by missing the second one on purpose, and forcing them to go the length of the court with the clock running. He chucked it against the rim; it went in.

That gave the 76ers a chance to win with a desperation 3-pointer. The full-court inbounds pass went into the left corner, and who was there to intercept it, heaving it back into the air to run out the clock?

To the surprise of no one in a Celtics uniform, it was Smart.

“That’s a Marcus Smart sequence. That just describes him so well,” guard Jaylen Brown said after Boston beat Philadelphia 114-112 on Wednesday night to advance to the Eastern Conference finals for the second straight year. “If it came down to one guy coming up with it, everybody’s got their money on Smart.”

The Celtics will play Cleveland in the Eastern Conference finals for the second straight year. Game 1 is Sunday in Boston. It’s the Celtics’ first back-to-back trips to the conference finals since making it five straight times in the original Big Three era from 1984-88.

Embiid had 27 points and 12 rebounds for the 76ers, Dario Saric had 27 points and 10 rebounds, and Ben Simmons added 18 points, eight rebounds and six assists. The 76ers rode The Process back into the playoffs for the first time since 2012, winning won 20 out of 21 games before Boston beat them three straight times to open the conference semifinals.

In a game that featured 21 lead changes — the most in the playoffs this year — the Celtics scored eight straight points in the final 1:37, taking the lead on Tatum’s layup with 23 seconds left. Embiid had a chance to tie it but he missed a heavily contested layup, failed to tip it back in and then grabbed that rebound, too.

Rozier knocked the ball out of his hands, off his leg and out of bounds with 10.8 seconds left.

“Just a championship play, that’s all,” said Rozier, who made a pair of free throws to make it 113-109 — eight straight points for Boston.

J.J. Reddick’s 3-pointer cut the deficit to one, and then it was Smart’s turn. Coming off the bench, he had 14 points, six rebounds, six assists and three steals.

After striking up a long-distance friendship with Drew Bledsoe during the Milwaukee series, Rozier finally met the former Patriots quarterback for real.

Rozier first invoked Bledsoe’s name during a trash-talking back-and-forth with Bucks guard Eric Bledsoe, pretending to confuse the two. Drew Bledsoe joined the fun by recording a video that was played for the TD Garden crowd during Game 7.

But on Wednesday, the football player was there in person, meeting Rozier before the game and sitting courtside with Celtics owner Wyc Grousbeck.

Stevens has never put much stock in coach of the year awards.

So predictably, the news earlier Wednesday that he didn’t receive a single vote for this season’s National Basketball Coaches Association’s trophy, which went to Toronto’s Dwane Casey, didn’t faze him either.

“The way that thing works is you get one vote…I looked at the sheet and there’s no way that I would have voted for me over any of the other 29 people,” Stevens said. “The guy that should have won got it.”

The winner of the Red Auerbach Trophy as the NBA’s Coach of the Year Award will be announced next month.

76ers: Embiid was called for a technical foul for elbowing Horford under the basket midway through the third period. Horford made the free throw, and Aron Baynes made two for the original foul to give Boston a 75-63 lead, its biggest of the game to that point. … Embiid is 0-8 on game-tying or go-ahead shots in the final minute this season, according to ESPN.

Celtics: G Shane Larkin (left shoulder sprain) was unavailable after running into a hard pick in Game 4. That left the coach Brad Stevens with an eight-man rotation. … With seven 3-pointers in the series, Baynes has more in these five games than in the other 409 games of his career combined, according to ESPN. … Boston was 6-for-20 in the third, with six turnovers, watching a nine-point lead wither to one. … Tatum and Utah’s Donovan Mitchell are the only two NBA rookies with seven straight playoff games of at least 20 points since Julius Erving did it in 1972.