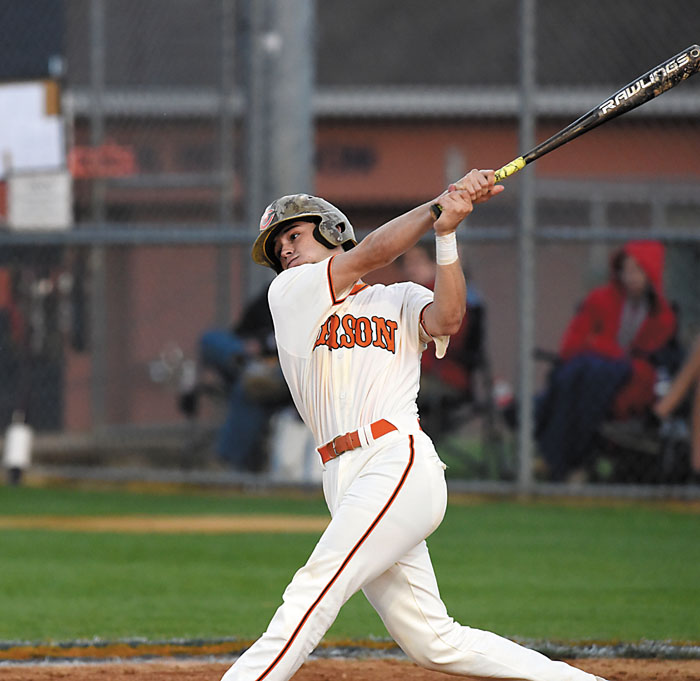 Wayne Hinshaw file photo/for the Salisbury Post ... Carson’s Clayton Gilmore drove in the winning run with a hit in the bottom of the seventh inning in Wednesday night’s 2-1 state 3A baseball playoff win over West Rowan. Gilmore also scored the tying run in the sixth inning and made a great catch in field.

The Carson senior’s performance Wednesday night summoned memories of the Brooklyn Dodgers infielder, whose pinch-hit double in the ninth inning broke up a no-hitter and decided Game 4 of the 1947 World Series. And while Gilmore’s stage was considerably smaller, his two-out, run-scoring single in the last of the seventh gave Carson a 2-1, come-from-behind victory over visiting West Rowan in the first round of 3A state playoffs.

“Just doing the job,” said Gilmore, an outfielder and No. 9 hitter who isn’t one of those ham-it-up, show-biz kids. “I got something I could handle and did what I could with it.”

Just like Lavagetto did all those years ago. Gilmore rolled up his sleeves, dug in and lashed an 0-1 pitch from Payne Stolsworth that hugged the right-field foul line and fell in for a game-winning hit. Carson (22-5) won its seventh straight and earned a second-round home game against Eden-Morehead, to be played Friday or Saturday.

“(Gilmore) is not your typical No. 9 hitter,” said winning coach Chris Cauble. “We moved him down to nine because he was struggling early, but he kind of found a home there. It something that kick-starts us back to the top of the lineup, so I’ve just left him there and he’s embraced it.”

The hit made a winning pitcher of right-hander Owen White, who tossed his fourth complete game, struck out 12 and allowed only pitcher Olen Stamper’s ground-rule double in the top of the fourth inning. The match shaped up as a game of truth-or-dare between the two starters — with Stamper exiting after Carson tied the score 1-1 in the last of the sixth.

“I wasn’t trying to do too much,” said Stamper, who retired Carson’s first 13 batters by spinning curve balls off the plate and change-ups that danced around barrels. “I just wanted to locate with every pitch and keep them off balance.”

West (12-13) excused itself from the post-season table with its fourth consecutive loss, but not before plating the game’s first run. Stamper connected on a change-up and drilled a ball that one-hopped over the fence in left field. Courtesy runner Daniel Sell advanced to third base on Daniel Durham’s groundout and scored when JT Fecteau lined a hissing sacrifice fly that Gilmore somehow grabbed while tumbling in shallow right.

“In my mind, I was just hoping to get the run in,” said Fecteau. “It was a heck of a catch, an incredible catch.”

“There wasn’t time to think,” Gilmore noted. “I just knew I better get on my horse and try to make a play. Unfortunately, I wasn’t able to get the runner at home. That would have been huge.”

Indeed. Instead, it gave Stamper and the Falcons a lead that stood until the sixth inning. Carson drew even when Gilmore — a .302 hitter after going 2-for-3 — punched a leadoff single into center field, stole second and scored when teammate Cam Prugh steered a sharp, two-out grounder into left.

“Olen was a completely different pitcher than he was last time we saw him,” said Prugh, referencing Carson’s NPC-clinching 9-0 win on April 28. “When he’s on like that, he’s really tough. He threw me a curve ball and kind of hung it. I was fortunate to put a good swing on it.”

Stamper agreed. “I threw him a curve on the first pitch and he took a bad hack at it,” he said. “So I tried to double it up, but he stayed on it because I floated it.”

And a pitch without conviction is a pitch asking to be punished. “It was a mistake,” said Fecteau, West’s freshman catcher. “But this was one of the best starts he’s had in a long time. It almost paid off.”

“A hanging curveball is a pitcher’s mistake,” added White. “You see that coming in, you’ve got to take advantage.”

There were two runners aboard and two away when Stolsworth entered and swept up the the sixth-inning mess. He wasn’t as sharp in the last of the seventh, when Maddux Holshouser grounded a leadoff single to right, reached second on a one-out wild pitch and third on a Cole Hales groundout. Following a walk to Garrett Alewine, Gilmore settled matters with one well-executed swing.

“All I remember is thinking, ‘Please stay fair,'” Gilmore said.

When it did, Carson players rushed the field in celebration. “We had been trying to pull everything,” Cauble said. “But that time (Gilmore) went with the pitch and the rest is history.”

NOTES: White threw 102 pitches, induced seven groundouts and won his ninth game. … Stamper scattered three singles and struck out three in 5 2/3 innings. He was chasing his fifth victory. … Eden Morehead (20-8) has won five of its last six games after posting a 6-1, first-round victory over Forestview.