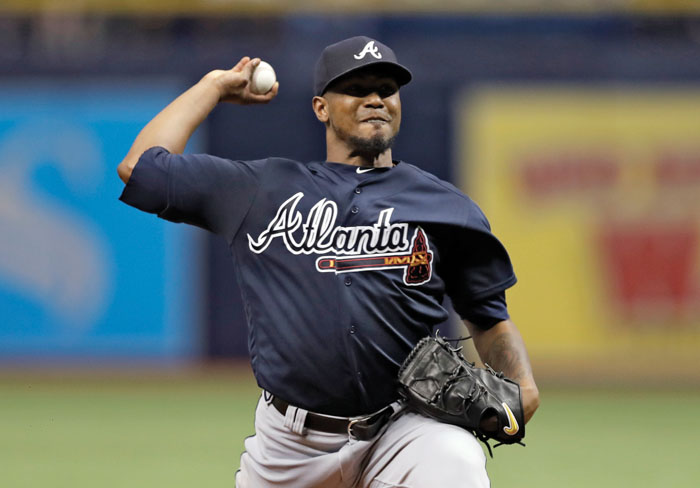 ST. PETERSBURG, Fla. (AP) — Nick Markakis hit a three-run homer and the Atlanta Braves set a franchise record for consecutive shutout innings on the road Wednesday night in a 5-2 win over the Tampa Bay Rays.

Wilson Ramos’ two-run single with two outs in the eighth ended a string of 34 straight shutout innings for the Braves, who won for the seventh straight time on the road. That is the longest streak for the Braves in the modern era (after 1900), according to the Elias Sports Bureau, surpassing the 30 consecutive innings by Atlanta’s staff in July 1992.

Ramos’ hit extended his hitting streak to 16 games, the longest active streak in the majors.

Julio Teheran (3-1) struck out seven in six shutout innings, the third time in four starts that the right-hander has not given up a run.

Arodys Vizcaino pitched the ninth for his sixth save in seven opportunities.

Markakis’ seventh homer of the season capped a four-run third inning against Rays starter Ryan Yarbrough that gave the Braves with a 5-0 lead.

Ender Inciarte, who came into the game in an 0-for-19 slump, drove in Atlanta’s first run with a single, the first of his two hits.

Yarbrough (2-2) gave up five runs and six hits while striking out seven in five innings for the Rays, who have lost three straight.

Braves: SS Dansby Swanson (left wrist inflammation) is eligible to come off the disabled list Monday, but is not yet swinging a bat.

Rays: SS Adeiny Hechevarria, who left Tuesday’s game early with a left eye contusion, was out of the lineup but available, manager Kevin Cash said. … RHP Nathan Eovaldi (right elbow surgery) struck out three in two innings in his second rehab start for Class A Charlotte, throwing 32 pitches  and giving up one run on two hits. The Rays have not ruled out Eovaldi’s return by the end of the month.