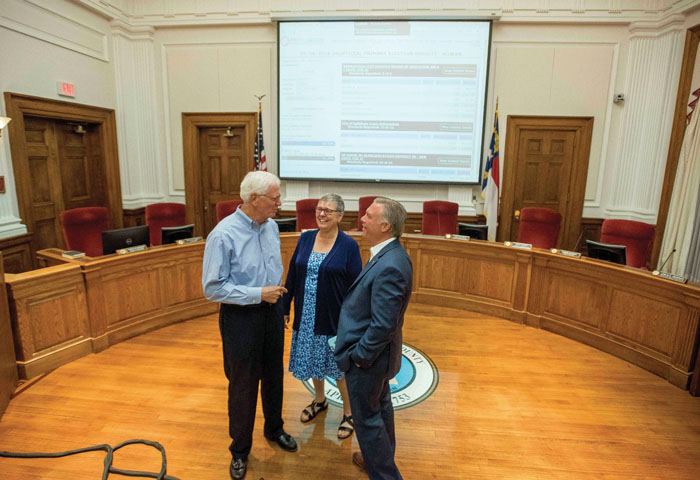 The trio were selected in a startlingly small year for voter turnout. Out of 94,064 registered voters, only 10,598 participated in the primary, or 11.2 percent.

Klusman came out with more than double the votes of challenger Craig Pierce, who received 2,278 votes. Pierce, who is currently on the board, had sought another seat so that he could remain on the board through 2020.

Edds said that low voter turnout could be viewed in one of two ways.

“I think that shows that folks are pretty content,” he said. “I don’t approve of a low turnout. Sometimes you end up a victim of contentment. Luckily, that didn’t happen here.”

Klusman said the results showed the people of Rowan like the direction the county has been going in for the past four years.

“Things aren’t done in a silo anymore,” she said. “It’s like finally this county is working together. … It used to be that Rowan was the place not to do business. We are ‘the’ place to do business now.”

Greene agreed, adding that in conversations with voters he’d heard that “people have approved the direction that we have been taking the county in.”

“They like the civility of the board in talking with the municipalities and getting along with them,” said Greene.

Edds, Klusman and Greene ran a semi-collective campaign, calling themselves “EKG.” As they move forward toward the general election, their goals and next steps reflect a cohesive mindset.

Klusman said the county has some real challenges that need to be addressed in the immediate future: the opioid crisis, jobs programs and education for future workers, to name a few.

Greene said the Economic Development Commission has been very active and that the county could expect good jobs coming soon.

Edds said that if the county wants better jobs, it needs better employees.

“That’s something that we’ve really got to focus intently on through the partnerships that we’re forging,” Edds said. “… There’s just got to be real solid discussions about how do we elevate our level of training and education to start meeting the demands of a modern economy.”

Julian congratulated the nominees, saying that he ran the best race he could.

He said that two years is too long a time to give a definitive answer on whether or not he would run again. Right now, he doesn’t think he will.

“I’ve had enough … ,” he said. “At the current moment, with my current feelings, there’s no way on God’s green earth I’d consider running again.”

Pierce and Sides could not be reached for comment.

Greene, Edds and Klusman will face Democrats Veleria M. Levy and Latasha Wilks on the ballot this fall.

Click here to view the precinct totals for the county commissioner race.