One last pledge: Granite Quarry says thanks to Scout who opened town meetings for 12 years 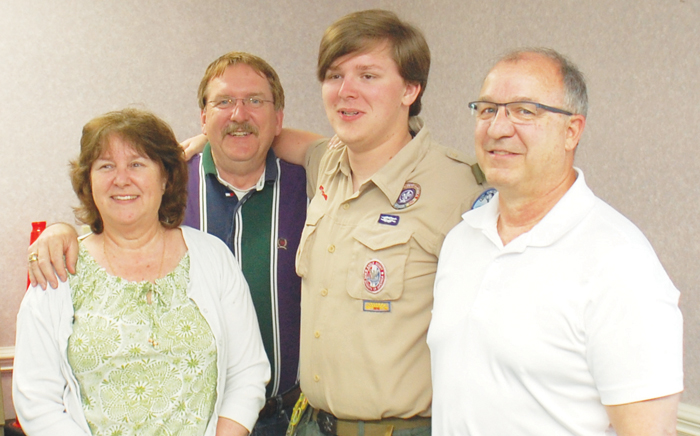 Boy Scout Zach Huddleston stands for a picture with his parents, Beth and Mark, on the left, and Granite Quarry Mayor Bill Feather, right.

GRANITE QUARRY — Think about it: Zach Huddleston first led the Pledge of Allegiance at Granite Quarry town board meetings as a nervous 6-year-old Cub Scout.

A dozen years later, when he was still performing the monthly task as a 6-foot-2-inch Eagle Scout, Zach was driving to the meetings himself in a 2004 Volkswagen Beetle.

In his Scout uniform as always, Huddleston walked to the front of the Town Hall meeting room one final time Monday night and started aldermen and the residents watching into those familiar words, “I pledge allegiance to the flag … ”

Huddleston will soon graduate from high school and head off to college at Western Carolina University. He first participated in the pledge with other Cub Scouts of Pack 379. The whole pack led the pledge that night in 2006, but Huddleston returned on his own the next month and asked whether he could do the honors himself.

Standing straight and saluting, Huddleston has performed the duty ever since, missing only a handful of meetings. It may not sound like much, but he had to be punctual all those months and years. He had to wear his Scout uniform. He had to put himself out there.

Zach has been coming to town meetings longer than most of the aldermen have served on the board.

“I always wanted to do it, and I looked forward to doing it,” Huddleston said. “… I never thought I’d make it this far.”

Not long after Zach led the Pledge of Allegiance for the final time Monday night, Mayor Bill Feather asked him to come forward and presented him with a framed proclamation, a key to the town and the news that he will receive a $1,000 scholarship from Granite Quarry toward his schooling at Western Carolina University.

The town also will mark June 8 as Zach Huddleston Day. That’s when he’s graduating from Gray Stone Day School. Prior to the May monthly meeting Monday, the town had a half-hour reception for Huddleston and included a congratulatory cake with the WCU colors.

In life, Zach said, only a few things remain constant. For him, it has been family, Scouts and showing up the first Monday of the month for town board meetings.

“We encouraged him that whatever you start, you finish,” mom Beth Huddleston said of herself and husband Mark.

Zach’s accomplishments as a Scout in Troop 379 first, then Troop 333 at St. Matthew’s Lutheran Church are considerable. He has earned 39 merit badges on his way to Eagle Scout.

With Scouting, he has camped 450 days. As a volunteer and Scout, he logged 1,600 hours of community service. He has participated in building homes for Habitat for Humanity, assembling backpacks for Food for Thought, and collecting canned goods for Rowan Helping Ministries and pull tabs for the Ronald McDonald House.

His projects for the town have included providing signage and birdhouses for trails and trees at Granite Lake Park.

Besides attending high school, Zach has a job at Rack Room Shoes.

Zach has enrolled in a Chem Four+One program at WCU designed to give him both a bachelor’s and master’s degree after five years. As the plan goes now, that would all be a prelude to medical school.

Zach would like to someday be an oncologist, concentrating on blood and lungs. He has an older brother who’s a physician specializing in internal medicine.

Zach says he will miss not being able to lead the town officials in the pledge. But who knows, the board might see him again.

“It would be nice to come back on my breaks when I can,” he said.

Granite Quarry moves ahead in efforts to land cold…