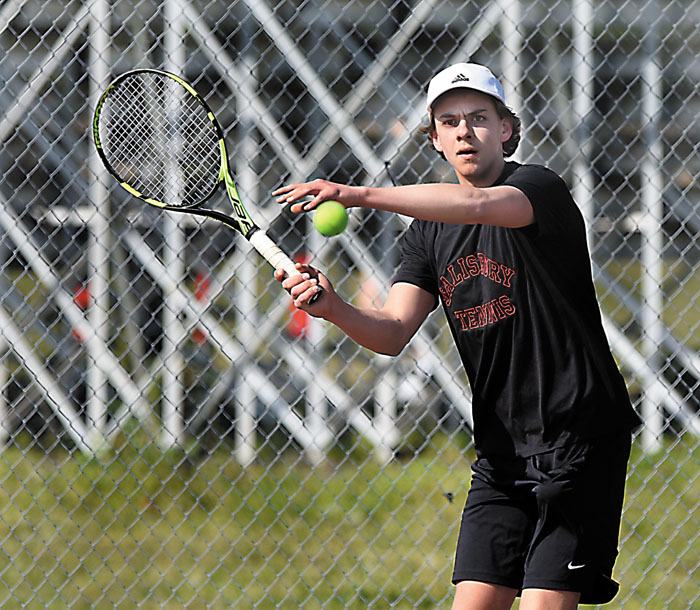 The Hornets cracked open their treasure-chest of a season and added another gem Tuesday — a 6-0 victory against Mount Pleasant in the second round of the 2A state playoffs.

“We’re just taking it match by match,” coach Milton Griffin said, moments after SHS (20-0) swept the singles competition and earned a third-round faceoff with Lexington next Monday. “We’re not looking for anything more or anything less. But I think this year we’re in a better place. We’ve prepared better.”

Salisbury lost to eventual state runner-up Shelby in the third round last spring, but looks very much like a team built for the long run.

“This team stands out because of all the work it puts in,” senior Adam Drye said. “The whole team practices during winter and spring breaks. We have no days off.”

That fact wasn’t lost on fourth-year Mount Pleasant coach Elizabeth Webb. “Sometimes in the playoffs, you underestimate your opponent,” she said after the Tigers (12-2) had their eight-match winning streak curbed. “We came in trying not to over-estimate Salisbury. They’re a good team. They’re very consistent. But we had nothing to lose by coming over here and playing as hard as we did.”

Drye was the first Salisbury player off the court, winning 6-1, 6-1 against Daniel Isenhour at fourth singles. He’s won all 2o of his singles matches.

“My serves were hit perfectly. They landed exactly where I wanted them to,” he said after prevailing in a brisk 45 minutes. “That’s a great start toward a point. I was able to attack the net and put away many, many balls.”

Teammate Jander Rodas-Palacios, Salisbury’s lone singles qualifier in this weekend’s individual state tournament in Cary, improved to 17-1 with a 6-0, 6-0 whitewashing of Masdon Wilson at third singles. “The guy had a really good forehand, but I played my game,” the junior said. “I kept the ball in play.”

“Just trying to be as consistent as I could,” McGee said. “You know, getting that extra ball on the court to win the point. He served really hard. That was the best part of his game. But instead of hitting it as hard as I could, I just put in play and waited for an unforced error.”

“I remained patient and finished points at the right time,” he said. “I moved my feet well. My serve was going in. And when I had chances, I made sure I got myself in the right position. I didn’t have any ridiculous shots.”

Two Salisbury players — Juan Salazar at sixth singles and Roarke Burton at first — had more difficult paths. Salazar, a sophomore who plays soccer in the fall and wrestles in the winter, had to find an extra gear before prevailing 6-1, 6-3 against Mount Pleasant’s Joey Sisinyak.

“I had heard this opponent was going to be tough,” Salazar explained. “And he was. It seemed like 80 percent of the games started with him going ahead 30-0. In the second set, when I was down 1-0, I told myself I was going to have to really work for this one. He made me run all over the court, but eventually he’d get frustrated and make a mistake. That was the difference.”

Burton had a hard time swatting aside the pesky Samuel Webb at No. 1. A turning point in his 6-3, 6-0 triumph came late in the first set.

“It took me forever to break him,” said Burton, now 16-2 as a singles player. “I remember it was 4-3 in the first set and he made a mistake — his first double fault of the match. I realized I had to take advantage of it, so I teed off on the next serve and put it right down the line for a winner.”

By the second set, Burton was on cruise control. “He started making more errors,” he said. “My shots were smoother, more precise. I was able to find winners when I needed them.”

All of which has Griffin anticipating — but not promising — a deeper run in the playoffs.

“Competing individually, you may think Salisbury has the talent and depth to go far,” he said. “But as a team we’re very strong.”

NOTES: The Hornets have taken a pair of CCC regular-season matches from Lexington (19-4), winning 5-4 on March 5 and 6-3 three weeks later. Lexington advanced with a 6-0 second-round victory over South Point on Monday. … Rodas-Palacios will make his second appearance in the state tournament. He suffered a first-round loss last season. Burton and Drye also qualified as a doubles team. They’ve won 13 of 15 decisions.