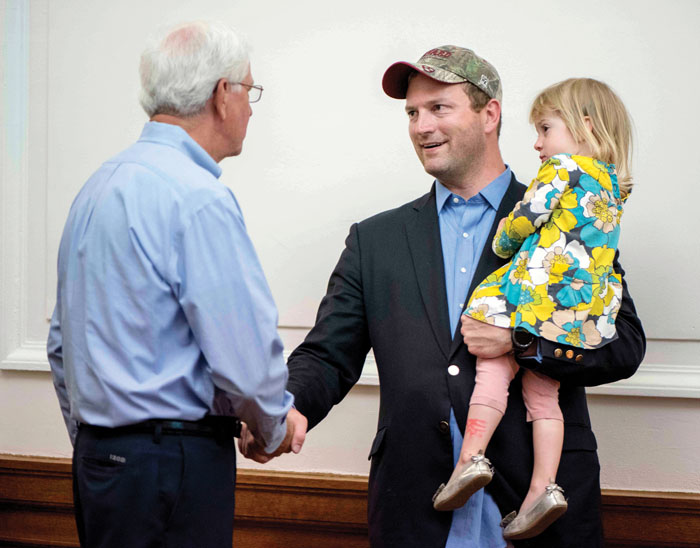 Jim Greene, who was nominated for a new term on the Rowan County Commission, shakes hands with Jonathan Bullock and his daughter, Elvie, on Tuesday night. Bullock is vice president of corporate development and government for Hotwire, which will lease the city's Fibrant broadband service after voters approved the deal in a referendum. Jon C. Lakey/Salisbury Post

SALISBURY — With 81.5 percent of the votes, Salisbury residents on Tuesday approved a lease of the city’s broadband system, Fibrant, to Hotwire Communications.

The City Council voted in favor of the lease April 3, but the residents’ vote was the last approval needed to finalize the minimum 20-year lease that proponents say could save the city millions of dollars.

Voters approved the referendum with a vote of 2,602 for and 590 against.

“I’m excited at the outcome that we had,” said Jonathan Bullock, vice president of corporate development and government for Hotwire. “I feel like it validated my feeling about the community.”

Bullock said that in the seven weeks he stayed in Salisbury, he talked with a lot of potential voters.

“And I feel like we answered a lot of questions and addressed a lot of concerns. And having this result confirms what I saw in the community, which is that they want us here,” Bullock said.

“We’re excited for a victory. But now … the real work starts,” said Hotwire Executive Vice President Max Kipfer. “And that’s the real exciting part for me, is to actually make the changes and do the things we need to do to make the system successful.”

The lease will allow private, Florida-based Hotwire to lease the full Fibrant system. Hotwire will pay rent quarterly and have minimum rent targets.

Bullock said the next steps would be to upgrade the system.

“You’ll see Hotwire people in town reviewing the system, analyzing the outside plant, upgrading the system,” Bullock said. “And then when we’re done with the upgrade, you’ll see a full new launch of the Hotwire system.”

Kipfer said the system will be rebranded as Fision, Hotwire’s fiber-product brand.

Based on those percentages, according to a report prepared by CTC Technology and Energy, Hotwire would pay the city $944,000 in the first year of the agreement.

That amount will be significantly offset by a nearly $500,000 increase in the payment the city makes on its refinanced debt for Fibrant.

Because the lease will give operation of Fibrant’s assets to Hotwire, a private company, the city will have to refinance its debt with taxable debt.

According to the CTC report, $444,000 is impressive compared to what Fibrant had been producing.

“To put this in perspective,” the report said, “Fibrant would need to increase its subscribership by roughly 570 customers — or 16 percent — without increasing operation expenses to obtain a $444,000 increase in revenue.”

Fibrant’s customer growth has remained flat for the past two years, according to the report.

The lease will begin July 1.