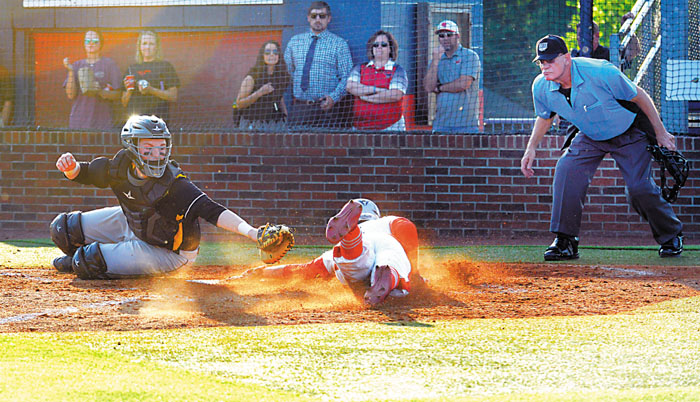 GRANITE QUARRY — There are so many unusual ways to score runs in baseball and East Rowan and Tuscola experienced most of them last night in a first-round, extra-inning 3A state playoff game.

The 11th-seeded Mustangs (19-7) came back from the dead in the seventh inning to tie the game, then snatched the victory in the bottom of the eighth, 5-4, on a bases-loaded hit batter with one out. Junior Bryson Wagner was the hero with the sore ribs on the walk-off hit-by-pitch.

“It was legitimate, coming up and in on me,” said Wagner, after happily taking one for the team. “I just had to stand there and take it. It was a really good game and we found a way to win.”

In an overall sense, the contest was a pitching duel between Mustangs’ ace Hayden Setzer (6-1) and Tuscola’s big right-hander Landon Henley (7-1). Henley is a 6-4, 220-pound junior who fanned eight Mustangs. Both starters pitched deep into the game but neither was around when the outcome was decided.

East led, 3-2, after five innings, thanks to a monster home run to left by sophomore Wayne Mize, his county-leading eighth of the season. Mize was himself a victim of three hit-by-pitches in the game but he finally got a pitch he could square up.

“Every pitch to me was inside except for that one,” Mize said of the homer. “I was looking for a pitch over the plate and he (Henley) left a hanging curve ball right where I like it.” The ball sailed well beyond the left field fence and over a second fence, into the neighbor’s yard.

The homer, plus the way Setzer was pitching, normally would be enough for the Mustangs, but the remaining three innings were anything but normal.

The Mountaineers (14-10) tied the game in the sixth inning, when a two-out drive to deep left center dropped in for a triple as East outfielder Will Brown stumbled on the elevated bank near the fence. Setzer then struck out Cameron Parker for the apparent third out but the ball got past the catcher and pinch runner Jarrett Penland trotted in from third to give 22nd-seeded Tuscola a 4-3 lead.

Penland, who has three saves for the Mountaineers, came on in the sixth in relief and the side-arming right-hander had a solid chance to nail down the upset in the bottom of the seventh. Then it all fell apart for him and the visitors.

Mize blooped a double behind first base, then Charlie Klingler reached on a bunt single as Penland fell down trying to field it. Wagner followed with another bunt to the mound and Penland threw to third to trying for the force out. But the ball skipped past the bag and into foul territory, allowing pinch runner Jax Fitz score the tying run.

East seemed to be in great shape to grab the win when Avery Shull was hit by a pitch to load the bases with no outs. But a force-out at home, followed by a pair of clutch strikeouts by Penland, left the bases full and sent the game into extra innings.

Setzer departed after seven strong innings pitched, allowing five hits and two earned runs. After Brown came on in relief to shut down the Mountaineers in the top of the eighth, East erased the frustration of the previous inning by pulling out the first round win in the most unconventional way.  Brown reach on a throwing error by the shortstop, then Mize was hit by a pitch for the third time. Klingler collected his third hit of the game, a short single to left, to load the bases with one out. That set the stage for Wagner to take one in the ribs to bring in the winning run.

“I’ll take it anyway we can get it,” East Coach Brian Hightower said, afterwards. “Especially, when we had the bases loaded with nobody out in the seventh and didn’t score. I almost out-coached myself tonight, so I am glad we ended up winning it.”

Hightower praised the effort of Tuscola, especially starting pitcher Henley, for a strong effort. “That is the the best 22 seed I have ever seen,” he said. “They battled hard and came in here with a lot of confidence.”

Tuscola coach Bergin Tatham, who brought his team on the 325-mile round trip from Waynesville Wednesday afternoon, felt it was a game of missed opportunities. “We made a few too many mistakes to win a game like that,” Tatham said, “We had two throwing errors in the seventh inning that gave them the tying run. You just can’t do that against a good team like East.”

Tatham noted that the five hit batters by his two pitchers was a matter of trying to pitch aggressively and throwing curve balls that sailed into the hitters.

East Rowan moves on to the 3A second round but will have to go on the road Saturday (possibly Friday) to face sixth-seeded Southwest Guilford. The Cowboys (22-3) rolled past Hickory, 11-1, in last night’s first round.