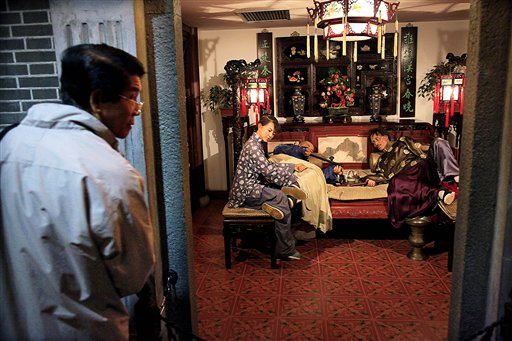 A visitor looks at a figure display depicting an opium den at a museum in Shanghai, China. AP Photo/Eugene Hoshiko

From an editorial published in The New York Times:

One of the more distressing truths of America’s opioid epidemic, which now kills tens of thousands of people every year, is that it isn’t the first such crisis. Across the 19th and 20th centuries, the United States, China and other countries saw drug abuse surge as opium and morphine were used widely as recreational drugs and medicine. In the West, doctors administered morphine liberally to their patients, while families used laudanum, an opium tincture, as a cure-all, including for pacifying colicky children. In China, many millions of people were hooked on smoking opium. In the mid-1800s, the British went into battle twice — bombing forts and killing thousands of civilians and soldiers alike — to keep the Chinese market open to drug imports in what would become known as the Opium Wars.

That history has either been forgotten or willfully ignored by many in the medical and political establishments.

As many as 313,000 people were addicted to injected morphine and smoked opium in the United States in the late 19th century, according to David Courtwright, a history professor at the University of North Florida who has written extensively about drugs. …

In the 1800s, many doctors viewed morphine as a wonder drug for pain, diarrhea, nerves and alcoholism. In addition to getting homemakers, Civil War veterans and others addicted, many doctors became addicts themselves. The drug was overused in large part because there were few alternatives; aspirin, for example, didn’t become available until the late 1890s.

In his 2001 book, “Dark Paradise: A History of Opiate Addiction in America,” Mr. Courtwright notes that the use of morphine began declining as younger doctors who had been better trained started practicing medicine and as non-addictive pain treatments became available. He also notes that many local governments across the country set up clinics that sought to help addicts — a forerunner of contemporary methadone clinics — but a hostile federal government forced virtually all of them to shut down by 1923. It did so under the misguided idea that it was wrong to keep supplying drugs to people who had become dependent on them — a view that is, regrettably, still widespread today.