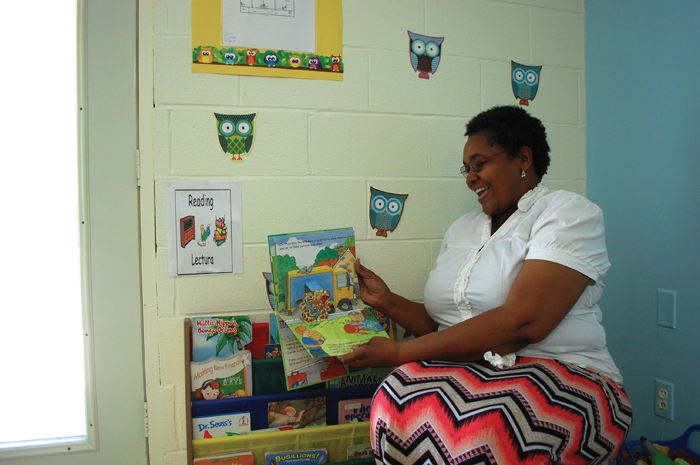 SALISBURY — Joyce Simpson and Lamont Savage say they are “striving to make a difference in the community.”

“And with the drop-off (program), that’s one of the twists that we’re going to have to let people know families can still have fun and still make sure that their children are having valid care,” Simpson said.

Drop-in or short-term child care is defined by the state as a “child care arrangement” in which care is provided for a maximum of four hours while parents are nearby and accessible.

A drop-in program does not require licensing from a state agency. But Simpson, director of Children First Early Learning Center, said that doesn’t mean the standards for the program won’t be high.

“I always tell people I’m a professional,” Simpson said. “So we’re going to make sure that the parents are getting what they need when they come here.”

Simpson and Savage said the drop-in program could work particularly well for single-parent families or families in which both parents work.

“We had a family today that … (was) reaching out about 10 o’clock this morning saying that they’re in need of drop-off care. And it’s something that, speaking with the father that dropped him off, you know that’s something that hasn’t been around here that they could utilize,” Savage said. “So they’re happy for this.”

The hours for drop-in care run from 8 a.m. to 9 p.m. Monday through Thursday and 8 a.m. to midnight Friday and Saturday.

Savage said the program could even be used in place of a baby sitter.

“We know there’s not a lot of things that are going on in Salisbury, so if people travel to Charlotte or Concord or Greensboro for nights out, we’re just allowing parents to go out and do that with peace of mind knowing that their child is in a quality program but also giving them the time to get back to us,” Savage said.

Savage said that if parents want to drop off their children between 8 and 11 a.m., they need to register their request by 8 p.m. the day before.

The price for four hours of drop-in care is $12.

“And I don’t think they can beat that where they go,” Savage said.

When asked how they could afford to offer such a low price, Savage said the program has team members “willing to do what we have to do in order to grab our fair share of the market space.”

Simpson and Savage said the drop-in program is just one of the “cutting-edge” offerings Children First Early Learning Center will have.

Simpson graduated from Catawba College in 2017 with a bachelor’s degree in early childhood education and said she’s excited to bring what she learned to the center.

“I’m going to be hands-on instead of stuck in an office. Making sure they’re getting what they need, making sure I’m reading stories, making sure that we’re doing lesson plans like they need to be so they’ll be meeting the standards that the state is looking for and then above that. That’s what we’re looking to do,” Simpson said.

Simpson said that when she, Savage, and a group of “like-minded” individuals started thinking of opening the center, they focused on the importance of early childhood education.

“Because there’s stages that children go through in their development. I mean, from birth up until the time they’re about 5. That means they’re just like sponges,” Simpson said. “So if we could actively make sure that play is fun and in the middle of it we’re just putting in philosophies and things where they can learn and get those minds to work, you’d be amazed at what they can learn.”

Savage has run a separate child care center — Learning 2 Achieve Success Academy — for about six years. He said he has a passion for the work.

“I coach at North Rowan Middle School. And I just love our youth. And I’m wanting to be an individual that can pour into the children and show them that you can make it if you put the right foot forward and you have the right mindset, that you can go on to accomplish great things,” Savage said.

The center will have a regular child care program that will run from 6:30 a.m. to 6 p.m. Monday through Friday, starting in the middle of June.

Regular child care programs must be licensed, and Simpson is waiting to hear back from the state on an application.

Both the drop-in program and the regular program serve ages 2-12.

The rate for the regular program has not yet been set, but Savage said parents will be able to pay with cash or with subsidy vouchers from the Department of Social Services.

The next open interviews for teachers will be from 5 to 6:30 p.m. Tuesday.

For more information about the center, visit it at 114 Oakwood Ave.