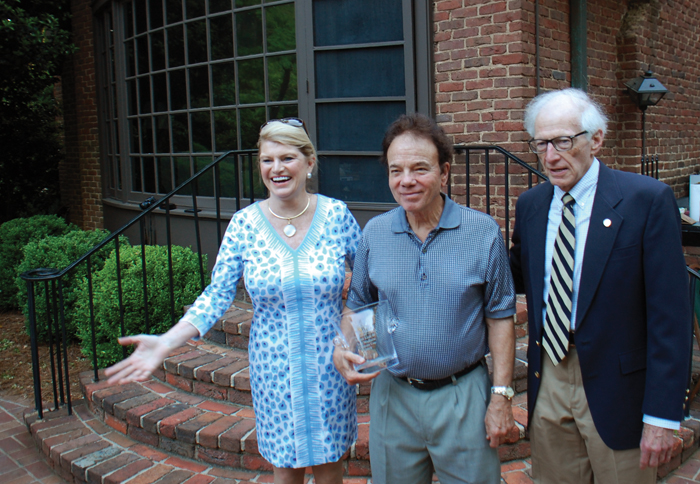 SALISBURY — Amid the handsome backdrop of the Eastover estate Sunday evening, Historic Salisbury Foundation awarded its most prestigious preservation award to Lee and Mona Lisa Wallace.

The Clement Cup — named for Edward Clement, the driving force and founder of HSF — goes to individuals who exhibit a commitment to historic preservation in Salisbury and Rowan County over a sustained period of time.

Years ago, the first Clement Cup went to Clement himself.

The Wallaces were recognized for their restoration, stewardship and sharing with the public the Hambley-Wallace House at 508 S. Fulton St. They opened the mansion, considered Salisbury’s little Biltmore, for HSF’s 40th anniversary gala in 2012 and also for that year’s OctoberTour, leading the tour to a record-breaking year.

They opened the house for OctoberTour again in 2017, and along with Bill and Shari Graham, were presenting sponsors of last year’s tour of homes and historic sites.

Beyond these things, foundation President Susan Sides said, “their generosity to Historic Salisbury Foundation in recent years has helped sustain the organization.”

“The importance of stewardship of our local landmarks cannot be overemphasized,” Sides said in presenting the Clement Cup. “Mona Lisa and Lee have set a high standard for the rest of us to follow.

“The Wallaces believe that the historic houses and buildings make Salisbury special. They believe it is important to share that special character with the public by opening landmarks like the Hambley-Wallace House.”

The Clement Cup presentation came during the foundation’s Andrew Jackson Society dinner on the terrace of Eastover, an estate owned by Joe Wilson. Sherry Beck was chairwoman of the dinner.

Started in 1988, the Andrew Jackson Society is made up of core supporters of Historic Salisbury Foundation.

Eastover is off U.S. 29 near Cannon Mills’ onetime Swink plant.

Clement took a moment Sunday to talk about Eastover and Wilson, whom he has known a long time. Wilson has owned the residence since 1979.

“He claims he and I have gone to four schools together,” Clement said.

The Tudor-style country house and grounds were built around 1934 for Hearne Swink (1900-1975), a prominent administrator with Cannon Mills. Charlotte architect Louis H. Asbury was hired for the job, and Eastover is probably the most accomplished of his 16 commissions in Rowan County.

During a 50-year span, Asbury was considered one of the more important architects in the Piedmont region. He designed many schools, churches and homes. Swink’s choice of Asbury made sense, because Asbury had designed several houses in Concord for the Cannons and other prominent people.

“This place is a landmark in central Piedmont, North Carolina,” Clement said, telling Wilson he is “saving history here in Rowan County and beyond.”

Clement said he and Wilson used to be invited to “kids parties” at the estate because Swink had two daughters who were about their age. Swink served as vice president and secretary for Cannon Mills and was a member of the company’s board of directors for 39 years.

Swink also was a Rowan County commissioner and onetime president of Rowan Memorial Hospital. Constructed in 1965, the Swink Plant was named for him.

Lee and Mona Lisa Wallace became owners of the Hambley-Wallace mansion in 2011, and they launched into an extensive renovation.

“Every square inch of the property was restored, including the stables and the rose garden,” Sides said. “… The restoration was a massive project with as many as 50 people working on the site at a time.”

The restoration led to the Wallaces’ receiving the Gertrude S. Carraway Award from Preservation North Carolina in 2013.

The Chateauesque-style mansion on South Fulton Street dates back to the early 1900s when it was built for Cornish mining engineer E.B.C. Hambley. The house has been in the Wallace family since 1927, when it was purchased by Lee Wallace’s grandparents.

Lee’s parents, the late Leo and Virginia Wallace, moved into the house in 1941, not long after they were married.

“Virginia Wallace was an early supporter of Historic Salisbury Foundation, and the Hambley-Wallace House was on the very first OctoberTour in 1975,” Sides said.

If a couple named Wallace receiving the Clement Cup sounds familiar, it should. Leo and Virginia Wallace were recipients in 2009.