Darts & laurels: Baby on board, Bag in Back; farewell to flu and lauding the Lion 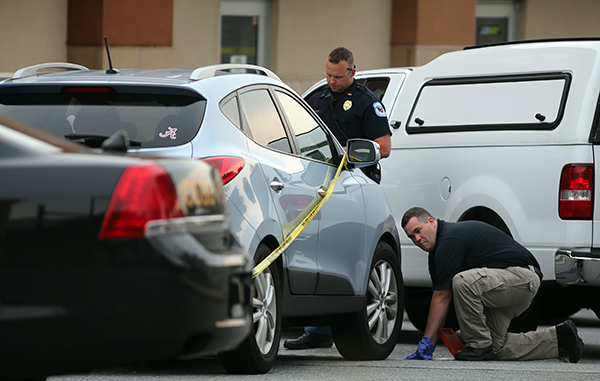 Cobb County police investigate an SUV where a toddler died in June 2014, near Marietta, Ga., when the father forgot to drop his child off at day care and went to work. AP Photo/Atlanta Journal Constitution, Ben Gray

Laurels to the push to prevent child deaths in hot cars. An Ohio couple whose 15-month-old daughter died after being locked up in her mother’s car at work are channeling their grief into action. Last week they launched a public awareness campaign around the slogan “Bag in the Back.” They’re urging anyone who has a child in a car seat to always put a purse, cellphone, shoe or other essential item in the back seat with the child so that, as the driver grabs the item, he or she will be reminded that the child is still there. How could someone forget their child? It happens most often when there’s a break in routine and a parent or caregiver is distracted. That’s no excuse for forgetting a child, just the best explanation that those who study these things have been able to come up with. Each year, nearly 40 U.S. children die from heatstroke after they are left in cars, in most cases by accident. We’ve had tragic cases of this close to home. If you’re transporting young children, make it a habit to put some essential item in the back seat with them.

Dart to a North Carolina’s record-breaking bout with the flu in 2017-18. After two successive years of 218 flu deaths, the state saw 379 people die this season from the flu. That’s a modern-day record. The virus keeps hanging on, with one death reported just last week. The peak, though, was back in February when 55 people died in one week. Most victims are over the age of 65, but no age is immune. If you’re wondering whether to get a flu vaccine next year, consider this statement from the Centers for Disease Control: “An annual seasonal flu vaccine is the best way to reduce your risk of getting sick with seasonal flu and spreading it to others. When more people get vaccinated against the flu, less flu can spread through that community.” Do us all a favor: Get a flu shot.

Laurels to Food Lion’s ongoing efforts to fight hunger. Recently the chain recognized those who go above and beyond to help end food insecurity in the supermarket chain’s 10-state footprint. The Feedys Awards Banquet has become an annual event. Since 2014, Food Lion has been committed to providing 500 million meals to people in need by the end of 2020. One of the award winners named last week was the Banner Elk store, where Manager Andy Grill found the local food bank could take donations only once a week — too seldom to accept produce that was being taken off the shelves. He and his staff looked for other avenues and found the after-school program at the local YMCA could put the food to good use. That makes Banner Elk “The 2018 Store that Roars.”

Editorial: Seriously, you must vote