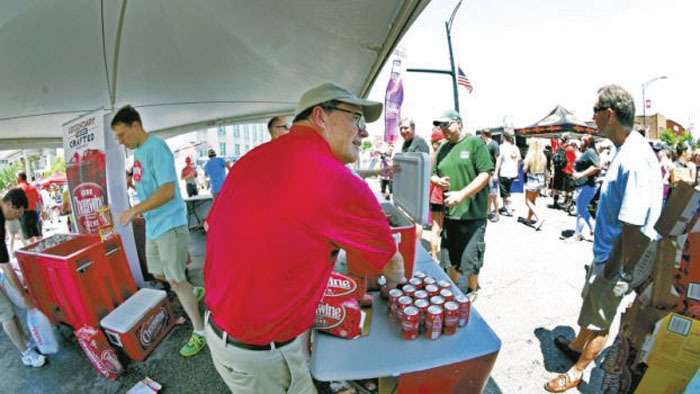 Cliff Ritchie working in one of the 3 free Cheerwine drink booths. photo by Wayne Hinshaw, for the Salisbury Post

SALISBURY — So what can you expect at the May 19 Cheerwine Festival, beyond plenty of Cheerwine?

The Cheerwine Festival will be in downtown Salisbury from 10 a.m. to 8 p.m. May 19. There is no admission.

Those cheesecake empanadas will come from Mambo on Ruedas; the barbecue tacos, from El Patron.

But there’s more soft drink-inspired offerings from the food vendors who will be at the festival.

At the biergarten, New Sarum Brewing Co. and Morgan Ridge Railwalk Brewery each will offer beers inspired by the Salisbury-based soft drink.

In addition, organizers announced Monday that a Cheerwine history exhibit will be on display at Rowan Public Library from 10 a.m. to 1 p.m. on festival day.

Craft vendors will be on hand.

Cheerwine merchandise will be available at the festival. Sponsors are Cheerwine and the city of Salisbury.