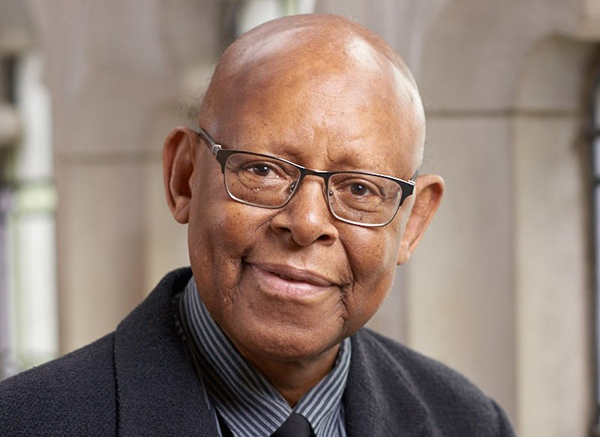 From a Washington Post column by Samuel Freedman about the Rev. James H. Cone, who died last month:

During a half-century as a professor at Union Theological Seminary in New York, Cone formulated and espoused “a black theology of liberation,” as he titled his seminal 1970 book. He infused a radically righteous version of Christianity into American public life through the thousands of ministers, theologians and laypeople he affected, whether as seminary students or readers of such definitive texts as “Martin & Malcolm & America” and “The Cross and the Lynching Tree.”

A child of small-town Arkansas who grew up nearby to lynchings, then a young professor catalyzed by the Detroit racial uprising in 1967, Cone channeled his erudition, outrage and faith into a revisionist view of God and Jesus as champions of the downtrodden.

“In a racist society, God is never color-blind,” Cone wrote in “A Black Theology of Liberation.” “To say God is color-blind is analogous to saying that God is blind to justice and injustice, to right and wrong, to good and evil. Certainly this is not the picture of God revealed in the Old and New Testaments. … Yahweh sides with the poor within the community of Israel against the rich and other political oppressors. In the New Testament, Jesus is not for all, but for the oppressed, the poor and unwanted of society, and against oppressors.”

Long before Cone, of course, black slaves had brilliantly subverted the white slave-owner’s version of Christianity, which concocted a scriptural case for racial supremacy. To the contrary, the slaves found in the Exodus narrative an analogy to their own suffering and ultimate deliverance. They heard, in such Hebrew prophets as Amos, Isaiah and Jeremiah, a divine rebuke to a morally corrupt nation.

Much of the black theology that infused the civil rights movement harked to those bases in Exodus and the prophets. Jesus of Nazareth, it often seemed, remained safely in the hands of whites, who for centuries had worshiped him as a blond-haired, blue-eyed Aryan.

Cone entered the ideological and theological fray in the late 1960s, when black Christianity was facing two major challenges. One came from the secular, socialist quarters of the black power movement. The other emerged, through the person of Malcolm X, in the forms of the Nation of Islam and traditional Sunni Islam. By such lights, Christianity was the “white man’s religion.”

Cone addressed those critiques by reinterpreting the long-suffering Jesus into a comrade of the persecuted, whether they be Jews under Roman domination or blacks under slavery and segregation. While rooted in the African American experience, Cone went beyond color itself to argue that “blackness is an ontological symbol” of “what oppression means in America.” That formulation gave his work relevance to progressive religious movements of all races and kept it current in the era of intersectionality and #BlackLivesMatter. “He told us that if you’re going to be right, you’re not going to be popular,” explained one of Cone’s former students, the Rev. Anthony L. Bennett of Mount Aery Baptist Church in Bridgeport, Conn.

It is impossible not to hear Cone echoing through the most important black ministers today, from the Rev. William J. Barber II of the “Moral Mondays” movement in North Carolina to the Rev. Otis Moss III of Trinity United Church of Christ in Chicago to the Rev. Jonathan L. Walton at Harvard Divinity School.

The prophets of the Old Testament and the apostles of the New Testament were, like Cone, neither famous nor entitled. Still, their words have lived for millennia, and his, too, will outlast him. In a nation where putative Christians supplicate before the modern version of a pagan emperor, a nation where liberals too often shy away from religion’s moral language, Cone’s vision is more necessary than ever.

Freedman is a former religion columnist for the New York Times and the author of eight books, including “Upon This Rock: The Miracles of a Black Church.”