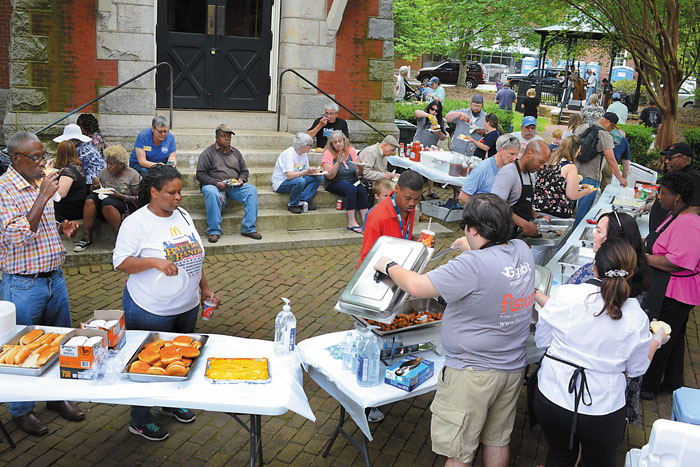 Wayne Hinshaw / for the Salisbury Post The Hotwire picnic served barbecue, hot dogs and hamburgers at the Bell Tower Park on Saturday.

SALISBURY — Salisbury residents who were unsure of a lease agreement with Hotwire Communications, which would see the Pennsylvania-based company agree to a 20-year lease with Fibrant, were able to get some questions answered over barbecue.

Jonathan Bullock, vice president of corporate development and government for Hotwire Communications, was on hand Saturday along with nine employees from the company’s offices in Pennsylvania, Florida and Raleigh to answer questions, and let people get to know more about the company at the Hotwire hosted free event.

Bullock said this event was an opportunity to serve the citizens of Salisbury.

Jessica Britton, who attended the event said she’d read about the proposal in the newspaper and thought, “it’s good for us Salisburians.”

She said it was great that the company held the event to let residents, “see what they can do.”

The agreement would lease the city’s Fibrant broadband system to Hotwire for a minimum of 20 years. It has already been approved by the City Council, but because of state law, the deal must also be approved by Salisbury voters in a referendum.

The referendum is part of Tuesday’s primary ballot.

The lease agreement that could relieve the city of its $3-million per-year loss on Fibrant.

Matt Woods said he thinks anything the company can do is a good idea. He had a chance to speak with Bullock and had what he believed was a very informative conversation.

“He certainly educated me on the situation,” Woods said.

Salisbury resident Garth Birdsey said he’s followed the contention that Fibrant has been since its inception. He hopes one of the benefits of the lease would be more quality customer service.

Betsy Raybon said she believed the company hosting a barbecue was way beyond what they needed to do. She enjoyed that they took the time to host such an event and explain the lease.

“A lot of people came with really good questions and I think folks left better informed,” Bullock said after the event.

The company provided barbecue, hot dogs and other items for 5,000 people. Bullock said although they did not feed that many people they did deliver the leftover food to Rowan Helping Ministries.

Anyone with questions about the lease can contact Bullock via email at jbullock@hotwirecommunication.com.

Livingstone College graduation encouraged to embark on the next…