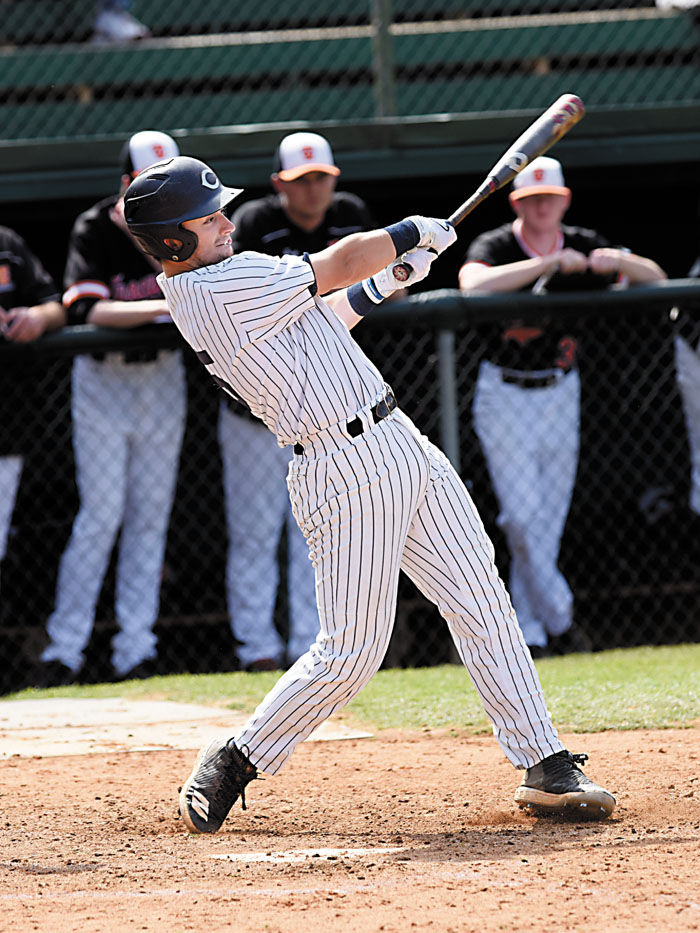 SALISBURY —Catawba’s baseball team played 228 games the last four seasons. Chance Bowden played first base in 224 of them. He was an ironman, an iconic figure.

“I broke my wrist in the South Atlantic Conference Tournament and missed a game my junior year,” the senior slugger said. “My freshman year, a pulled hamstring kept me out for a week. Those were the other games I missed. Other than that, I stayed healthy. Other than that, I was lucky.”

Bowden, a local guy who played at Salisbury High, was lucky — and good. He logged more official at-bats (905) for the Indians than any player in the storied program’s history. He also did quite a bit of damage with those at-bats. He ranks second in Catawba’s record book in RBIs (216) and third in hits (303). He’s tied for seventh in runs scored (194) and tied for eighth in homers (39).

And of course, he will always be known as the doubles king. He once belted four in a single game.  No Catawba Indian had ever done that. There were weekends where everything Bowden hit  seemed to find a gap. There was a 5-for-5 game against UNC Pembroke in which Bowden smacked three doubles. Fans were disappointed when he hit a home run in that game. They wanted another double.

Bowden’s school-record of 84 two-baggers may stand for a few decades. He had 15 more than anyone who has ever worn a Catawba uniform. Bowden’s first hit as an Indian on Jan. 31, 2015 at Belmont Abbey was a double. His final hit  for Catawba was an RBI double at USC Aiken on Saturday.

“My uncle reminded with a text that I started with a double and finished with one,” Bowden said. “And it does seem right.”

Bowden was recruited by Division I schools such as Western Carolina, but he elected to stay home to play for the Indians because of head coach Jim Gantt. Gantt already had coached Bowden to outstanding summers with the Rowan County American Legion team.

“I didn’t know I’d have the kind of college career I had,” Bowden said. “But I did know that playing for Coach Gantt I’d have a chance to keep improving in college. I knew I had a chance to keep getting better every day, every practice, every game. I knew if I put in the work that I could be successful.”

Bowden (6-foot-1, 195 pounds)  was always as good with his glove as he was with his bat. A right-handed hitter but a left-handed thrower, he was one of the best defensive first basemen in Catawba history. He excelled at digging low throws, and the last two seasons, he won the SAC’s Gold Glove for his position. Gantt always said Bowden would’ve started at first base even if he’d batted .150. Bowden batted .388 as a senior.

In 2015, Bowden drove in 50 runs for the Catawba team that reached the World Series. In 2016, he smashed a school-record 31 doubles, as part of a lineup that featured All-America and South Atlantic Conference Player of the Year Will Albertson. In 2017, Bowden was again a key cog in the lineup as teammate and classmate Luke Setzer posted an incredible SAC Player of the Year/All-America season.

As a senior, Bowden, his wrist injury behind him, exploded. He went 8-for-8 in a doubleheader with 10 RBIs against Coker to win National Player of the Week honors. He socked a walk-off homer against Newberry. One of the national leaders in hits (90), RBIs (66) and homers (18), he’s already been named SAC Player of the Year and will likely be on the All-America teams when they’re announced.

“I had a chance to watch Will have that magnificent season he had and then I got to see Luke have that amazing season last year,” Bowden said. “Luke and I are best friends, and there were several times this year he told me, ‘Now it’s your turn, Chance. It’s your turn.”

It was Bowden’s turn. He made he most of it.

The downside of  Bowden’s senior season was Catawba’s loss to Lincoln Memorial in the finals of the recent SAC tournament. Catawba led 7-4 going to the ninth inning of the championship game, but Lincoln Memorial rallied to tie in the ninth and prevailed in extra innings. Catawba had gone to the regionals in each of Bowden’s previous three seasons, but that LMU setback ended Catawba’s postseason hopes for this year.

“After losing the first game of the tournament to Anderson, we came back strong and played our best baseball of the season,” Bowden said. “We made a great run at the championship, got the best pitching  we had all season. We just came up a little short at the end. Lincoln Memorial came back to beat us twice at Newman Park and they did it to us again in the tournament.”

Normally, Bowden would’ve been practicing baseball today, getting ready for regional play. Instead, he’s enjoying a little time off at the lake.

“It’s tough not to be playing now,” Bowden said. “But Coach Gantt told us to remember all the things we did accomplish. Our senior class was part of four straight SAC championships, we went to three regionals, we went to the World Series. We were very blessed. Most college players don’t get to win one championship. We won a lot of them.”

Bowden has found time to do the job in the classroom and will graduate with a degree in communications. He has a promising sales career ahead of him, but he’s also a candidate to be chosen in the MLB draft in June. His defense is a big plus and he’s optimistic. He works out every day and swings every day. He’ll be prepared if the MLB call comes.

“It wouldn’t take a lot to sign me,” Bowden said. “I’d love to get a shot. Give me a plane ticket, and I’ll go somewhere and swing the bat.”