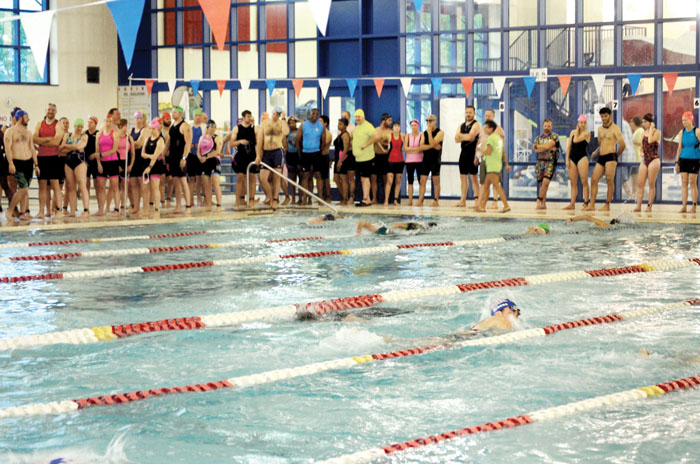 SALISBURY — It seemed as simple as 15-year-0ld Noah Julian calling up his “Pop Pop” Mike Julian and asking if he’d compete in a Sunday morning triathlon with him. The two would be the second and third-leg of a relay team for the event.

The senior Julian agreed, but it meant his son, Scott, would have to agree to be the first of this three-generational team. Despite an injury, Scott, an avid runner, assented.

The Julians were among two other relay teams and 126 total competitors who competed during the 9th annual Buck Hurley Triathalon held at the Hurley YMCA. The family finished within one hour and 45 seconds.

The 69-year-old said he’s been active since high school when he was a member of the Boyden High track team. His grandson, Noah, is on his way to beating his record.

“It’s exciting to see them enjoy something that I enjoy doing,” he said of his son and grandson.

It was a family triathlon for Delaine and Alan Fowler as their children Brady, 6, and Pace, 4, competed in Friday’s children triathlon and the couple did the Saturday event.

Alan said his family’s goal is to stay fit. He said they’ve competed in other races including local and regional Ironman Triathlon competitions and half marathons.

“I want our kids to see us work hard,” Delaine said.

She added this type of event pushes participants beyond their boundaries.

She commended the YMCA staff and many volunteers who do an “awesome job” putting on an event of this magnitude.

Delaine has participated in this event for about eight years and Alan has competed in the Hurley Triathalon two or three times before.

Harriet Forney of Belmont competed in the Salisbury event for the first time and said she became interested after joining Tri It For Life, a women-only organization that mentors women to become triathletes. Someone posted about the Salisbury event online via Facebook and Forney decided to give it a shot.

She along with a number of other women who a part of a Charlotte/Belmont group, Mahogany Mermaids, participated and several others cheered them on.

“Friends of mine were in a run group and they turned me on to this,” she said.

The Mahogany Mermaids, a group created to get women, particularly African-American women, to swim.

“It supports and empowers women to learn to swim,” Forney said.

She learned to swim through Mahogany Mermaids and before joining Tri It For Life and her first triathlon.

The women meet twice a week.

After Susan Blalock became ill at age 52, she decided to make some changes when it came to her health. She took swimming lessons and bought a bike. The Albemarle resident has competed in five triathlons and this year decided to compete with her friend Marina Hill.

Before Hill committed to doing a triathlon she volunteered last year for one and made the Salisbury race her first.

Hugo Correa of Salisbury has competed in the event five times before. He said he enjoys the friendships he’s made through such races. He mostly cycles and competes in obstacle races.

Earl Manley, a resident of Willow Springs, wanted to try something new, but has competed in half marathons. He’ll compete in his first marathon in the fall.

“This is a reminder that we need to take care of our bodies and this is a nice way to do it,” Manley said.

The youngest competitor was 14-year-old Marissa Wainwright, who was part of a relay team, and Leah Cressler, who at 16 was the youngest single competitor. The oldest was 75-year-old Dave Salmon.