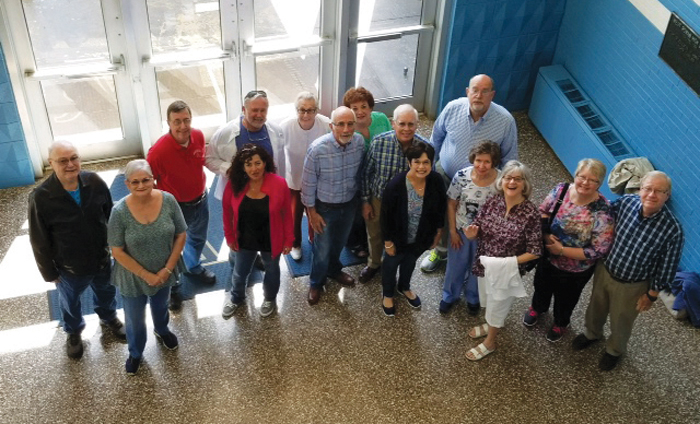 The group took a tour of the West Rowan Campus of today. 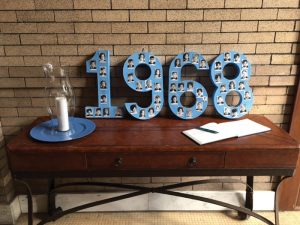 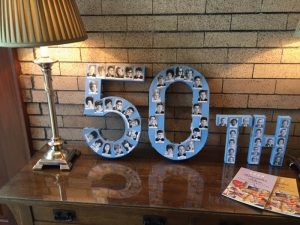 April 28, 2018 was a special Saturday night at the Salisbury Train Station as 120 classmates from the 1968 West Rowan High School graduating class came together to celebrate that they have survived their life’s struggles so far and the 50 years melted away. Many of the classmates had not seen one another since graduation. Earlier reunions did not have face book to help communicate! The “WRHS class of 1968” page on Facebook has been active over the last five years. Classmate Eric Hall did make a huge effort to contact classmates and get them talking. When Eric passed away last year there became a renewed interest in pulling the classmates toward a reunion. A committee call went out on face book and a dozen people showed up for the first meeting. That established there was enough interest to move ahead with some planning.
Joel and Millie Nesbit stepped up to find a venue and they personally put a deposit on the Salisbury Train Station. The committee started meeting every other month, and then every month to polish all the “who would do what.” Class president Butch Young came to all these meeting from Fayetteville every month, inspiring the full committee to offer up what they could do to help. A phone calling tree was activated. The effort to locate people was well worth the effort as the registrations came pouring in.
The first event of the reunion was to take a tour of the West Rowan Campus of today. The classmates that went to it were still raving about all the changes in the education world while enjoying the reunion dinner.
The decorating committee lead by Linda Owens Holshouser delivered a room full of light blue and white, the West Rowan colors from 1968. Table cloths, centerpieces, candles all set the climate for a warm gathering. The outside even had a personal photo spot made with a screen door decorated to frame the pictures taken there with “50 years” noted on it. Fun was had in that spot as folks took turns snapping a real photo… only a few selfies were noticed that night! Linda shared her original graduation cap and gown on display at the center of the room. The table there held the four yearbooks from 1964-1968, and a variety of other publications about 1968. Jane Holder Moore was chairman for the mementos given out and it started with each guest seating had a place mat with a picture of the graduating class and a chocolate bar wrapped in school colors labeled “West Rowan 50th reunion.” Details and love was evident in everything that night.
The new class directory was headed up by Barbara Harmon. It was the first thing handed to a classmate as they walked into the door at the train station. The directory was stuffed with a bookmark about all the things going on in 1968, name tags with a photo of each person from back in the day, and an ink pen personalized with “WRHS class of 1968, 50th Reunion.” The directory had their door prize number on the back… and there were plenty of door prizes through out the evening. Elaine Hewitt headed up the door prize efforts, and made it fun for all.
Donnie Waller was the beverage committee chair. He collected requested beverages the classmates indicated on their reservation cards that they would prefer. The entertainment was provided by Larry Chastain, a deejay who played music from the ’60s which promoted some dancing. The buffet dinner was catered by Debbie Suggs and her crew. The food was outstanding. The night was filled with fun and laughter as folks waited in line for their food. Even as they found their tables there was a constant buzz of conversation. The amazing fellowship felt by all was real and the reconnecting brought excitement to the room.
On a serious note, the program included a salute to the Veterans within the class. There were door prizes just for the Veterans that were donated by Doug Suggs, which he had made himself as a tribute. There was a table also set up to honor the lost soldiers of war. The significance of the white plates and red rose were explained by Barbara Harmon. Each Veteran present was recognized by asking them to stand and applause broke out in their honor. There was a basket on the center table to hold a flower tagged with the name of a class member that has passed away. Each name was called by Linda Morgan, and a moment of prayer was observed.
Every classmate was given a take-home gift of a mug that says “I survived my 50th High School Reunion.” What is so unique about that idea is that just about everyone wants to do this again! Hugs were flowing freely all night long. The highlights of that night can best be described in the words of those attending. They had a great time, appreciated all the work that went into making it happen for the group, and will be connecting with one another more in the future. Face book comments are all positive and the claims are they are glad they came to the reunion! “It was a magical evening.”